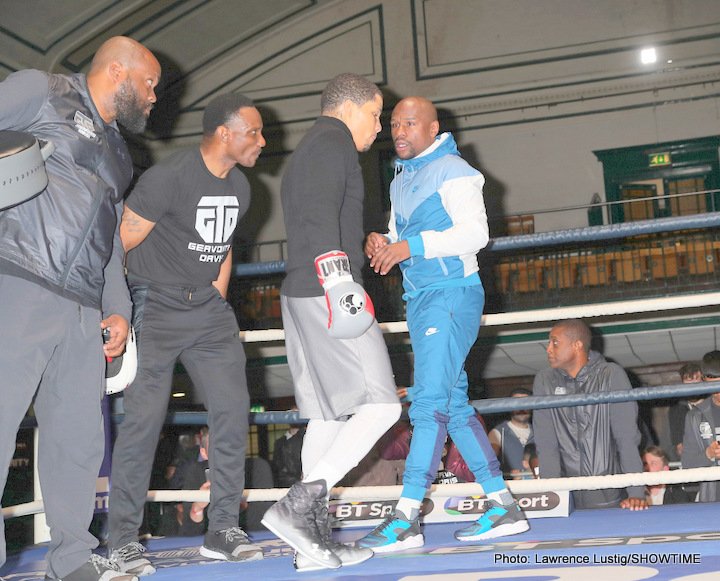 Floyd Mayweather protégé Gervonta Davis says he wants to become boxing’s next superstar but must first get past Cromer’s Liam Walsh.

The 22-year-old from the mean streets of Baltimore will make the first defence of his IBF super-featherweight world title when he steps into a British ring for the first time to take on the undefeated Walsh, live this Saturday night on BoxNation.

In his dazzling stoppage win over Jose Pedraza earlier this year to win his world title, ‘Tank’ as Davis is nicknamed, showcased all the tools needed to reach the very pinnacle of the sport and sees Walsh as just another step towards reaching that goal.

Preparing for his fight at the Copper Box Arena this weekend, Davis has been guided in the final part of his training camp by his promoter Mayweather, who has been sharing some words of wisdom with the 130-pounder.

“When I got back to Vegas, Floyd Mayweather was hands on more than usual, working with me in the gym late nights,” he said.

“I’ve been working extra hard. Having him back in the gym gives me that extra push and has my mind on another level.

“Having him in my corner makes me feel like I have that chance. I have one of the best in the business backing me. It means a lot. It makes me work harder,” Davis said.

30-year-old Walsh is no pushover himself and has stacked up 21 wins unbeaten, with 14 of those by knockout.

The Norfolk boxer is adamant that he will keep his unblemished record intact by handing Davis his very first loss.

“He certainly has potential and star quality – that was clear to see when he beat [Jose] Pedraza. But he has to come through me first,” said Walsh

“I don’t see any other way than me winning. If he’s going to be a star in the future, it’s going to have to be with a loss after fighting me,” he said.

Walsh is sceptical about the names on Davis’ record and believes he still has a lot of questions to answer.

“I don’t think he’s completely overrated, but I think there are still a lot of questions to be asked of him. He looked very good and brilliant against Pedraza. The only other reputable fighter on his record is Cristobal Cruz. There are a lot of question marks lingering on,” said Walsh.

“I will certainly ask all these questions. I’ll do it any which way that it has to go. I’m more than confident I’ll get the job done,” he said.

Following Davis v Walsh, BoxNation will then turn its attention across the Atlantic where pound-for-pound star Terence Crawford takes on the slick Felix Diaz, exclusively live from Madison Square Garden.

WBC and WBO super-lightweight world champion Crawford is very much the man to beat at 140-pounds but against the Dominican Republic’s Diaz he will need to be at the very top of his game if he hopes to continue his dominance of the division.

Diaz, a 2008 Olympic gold medallist and with just a solitary loss on his record, has been calling out 29-year-old Crawford for months, with the Nebraska native saying he will be ready for whatever comes his way.

“Come Saturday, I will be ready for whatever Felix Diaz brings to the ring that night,” said Crawford. “It’s going to be a great experience fighting at Madison Square Garden in the big arena where all the greats have fought. I’m looking forward to that night,” he said.

Davis v Walsh will be live from 7.30pm BST on BoxNation, followed by Crawford v Diaz from 2am BST.


« Liam Walsh: I have a better boxing IQ than Gervonta Davis

Brook ready for Spence, says GGG fight was a positive »