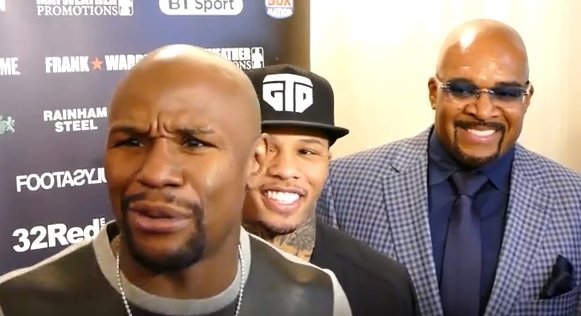 By Allan Fox: Floyd Mayweather Jr. gave a cryptic news update on the Conor McGregor negotiations on Wednesday by saying that the two fighters aren’t waiting on each other. It didn’t make sense what Mayweather said, but it suggested that he’s not in real hurry to speed the negotiations up for this boxing match. However, the Mayweather-McGregor fight could be a done deal very soon.

McGregor has reportedly signed his portion of the agreement for the Mayweather fight. He’s now waiting on Mayweather to see if the fight will happen. I think it’s pretty obvious the fight will be happening between Mayweather and McGregor because it’s the only one that Mayweather is interested in.

Mayweather doesn’t want to fight a top boxer in the sport, because he doesn’t see anyone that will bring in a lot of PPV buys for him to make a ton of money. McGregor is popular in MMA, and his recent fights have been reaching 1 million PPV buys. There’s no one in boxing right now that is hitting the 1 million buy mark since Mayweather left. So it’s about business for Mayweather to fight McGregor instead of someone from boxing, who knows how to fight inside a ring. McGregor has no experience in boxing other than sparring.

Mayweather said that he’s giving the fans the fight that they want to see by him facing the 28-year-old UFC star. Mayweather believes the Mayweather-McGregor fight will break the records for his fight against Manny Pacquiao in 2015. That fight brought in 4.6 million pay-per-view buys. Unfortunately, it’s going to be very hard for the Mayweather vs. McGregor fight to break the PPV records, because its largely seen as a joke fight by a lot of boxing fans. A lot of them see the Mayweather vs. McGregor as a sham, or a ‘money grab’ to get money from gullible fans who aren’t aware that McGregor has never fought in a boxing match before.

You can argue that Mayweather vs. McGregor is not a fight the knowledgeable boxing fans want to see. It’s a fight that could ultimately hurt boxing in terms of PPV. If a lot of fans purchase the Mayweather-McGregor fight thinking they’re going to see a great fight, they could wind up very upset if it turns out to be a mismatch like we saw in the recent Saul Canelo vs. Julio Cesar Chavez Jr. fight this month on HBO PPV. That fight was built up to be a competitive match-up that would have a lot of action. Instead, the boxing fans saw Canelo pounding away at a painfully thin Chavez Jr., who resembled a punching bag more than a fighter.

”This is the only fight that makes business sense,” said Mayweather to the boxing media about his potential match with UFC star McGregor. ”I’m coming out of retirement because I’m a businessman and I want to give the world what they want to see. That’s the fight the people want to see, the fight fans and the MMA fans,” said Mayweather.

Mayweather-McGregor is a fight that is targeting the casual boxing and MMA fans, which might be impressionable enough to purchase the fight thinking it’s going to be a good one. Since the fight I going to be inside a boxing ring under the rules of that sport, it puts McGregor in a terrible position to try and win. McGregor has never fought as an amateur or a pro in boxing. McGregor would have as much experience as you and me in a boxing match.

Mayweather might as well target a guy walking down the street and have him fight him inside the ring, because McGregor has about as much chance of winning as anyone off the streets. MMA is entirely different from boxing. MMA fighters come from a different background than boxers. A lot of them started out as wrestlers, and they don’t move well on their feet, and they’re not very fast of hand. There’s so much that a person needs to learn before they can fight inside of a boxing ring. McGregor is going to be going into the Mayweather fight with only the training that’s getting in one training camp. McGregor will have zero chance of winning unless Mayweather, 40, got old since his last fight in 2015 against Andre Berto.

”I think we can do record breaking numbers. I think we can break me and Pacquiao’s numbers,” said Mayweather. “I don’t know. All I can do is keep my fingers crossed, and hopefully we can do it. I can’t stand here and say they’re waiting on us. I’m not going to say that. They’re not waiting on us and we’re not waiting on them. As soon as their side connects with my side and they come to an agreement, then it will happen. Once my team comes to me and says, ‘Floyd, it’s a go,’ then it’s a go. It’s just another fight. It’s another fight that the fans want to see. I want to give the fans an explosion if that fight does happen,” said Mayweather about his fight with McGregor.

I doubt that the Mayweather-McGregor fight will break the PPV numbers set by the Mayweather-Pacquiao fight. A lot of things have changed since then. Many boxing fans are still angry at Mayweather and Pacquiao for the lack of excitement in their 2015 fight. The fans had to pay a premium to see that disappointing match on HBO or Showtime PPV. It went for $100 to $110 on PPV, and the undercard looked like it had been thrown together without any care for competitive match-ups. For what the fans had to pay to see the fight, they got very little value.

After promising an exciting fight, Mayweather boxed for 12 rounds, staying away from Pacquiao and not mixing it up at all. To make matters worse, Pacquiao was injured with a shoulder problem that prevented him from fighting at his best. Mayweather’s only fight since the Pacquiao dud came against Andre Berto in September 2015. Mayweather promised action for the Berto fight, but instead Mayweather chose to box and toy with Berto for 12 rounds. Besides the Mayweather-Berto fight being boring to watch due to the lack of action, it was one that the boxing world was not asking for.

Berto wasn’t one of the major players in the welterweight division. He was more of a fighter from yesterday’s sport. Berto was one of the best fighters in the welterweight division from 2008 to 2011. By the time Mayweather fought Berto in 2015, Berto was no longer seen by many boxing fans as a top level guy. The fighters that Mayweather should have fought instead of Berto were Keith Thurman or Gennady Golovkin. Mayweather didn’t want to fight either of them though, so he chose Berto.

“The first, and the most important part of this historic contract has been officially signed,” said McGregor via Themaclife.com. ”We now look forward to Mayweather’s [manager] Al Hamon, and his boxer’s signature in the next few days. “

Mayweather-McGregor will likely only do well if the MMA fans turn out in big numbers to purchase the fight, because a lot of boxing fans are not excited about the fight. One problem is that the boxing fans have never seen McGregor fight. I’ve only see McGregor fight once, and that was in taking a look at some clips of his fight with Nate Diaz on Youtube. I’ve never seen an entire fight of McGregor’s and I’ve never purchased one of his fights on PPV. After looking at how sloppy McGregor was against Diaz, I have no interest in ever seeing him fight other than against Mayweather. The only reason I would pay to see Mayweather-McGreogr fight is so that I could write about it. If not for that, I wouldn’t purchase it on PPV, because it’s a terrible mismatch. I think Mayweather vs. McGregor will be even more one-sided than Mayweather’s fight with Berto, and that was an unwatchable match. Berto fought like a sparring partner, and Mayweather showed no inclination to get out of 1st gear. He fought like someone that had already gotten his paycheck and he wasn’t going to put in any effort in the fight. 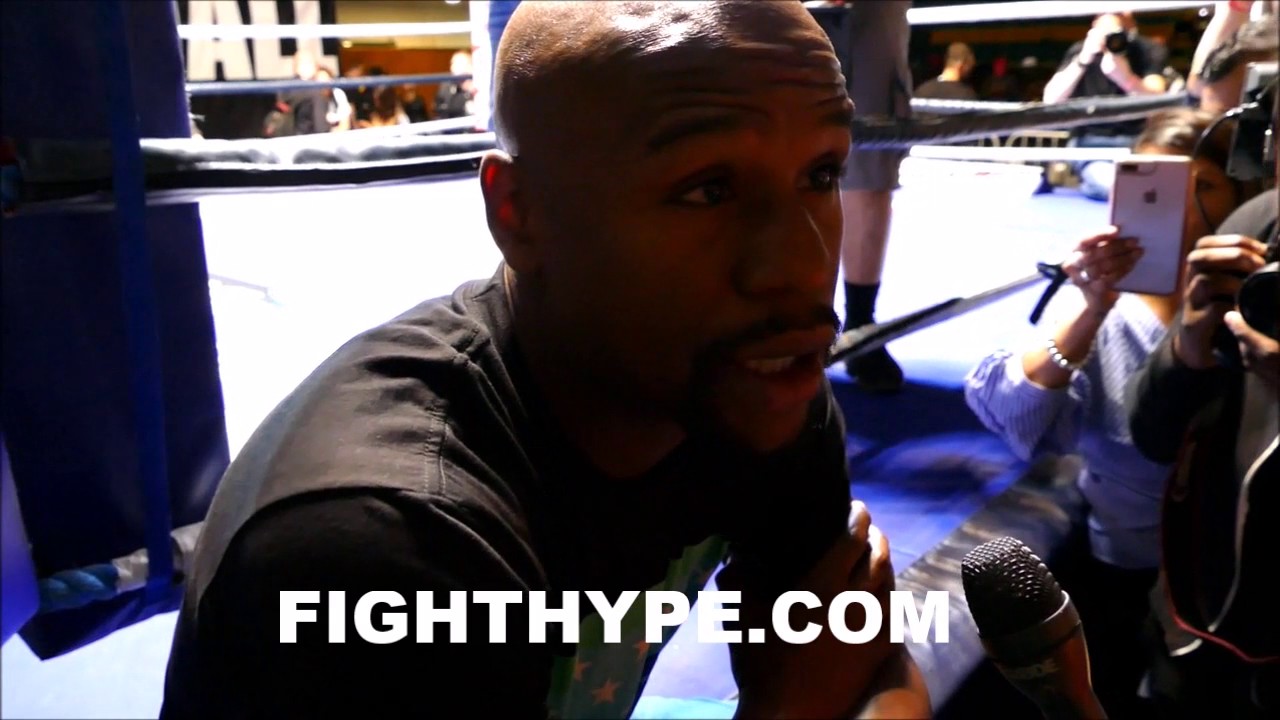 
« Brook ready for Spence, says GGG fight was a positive