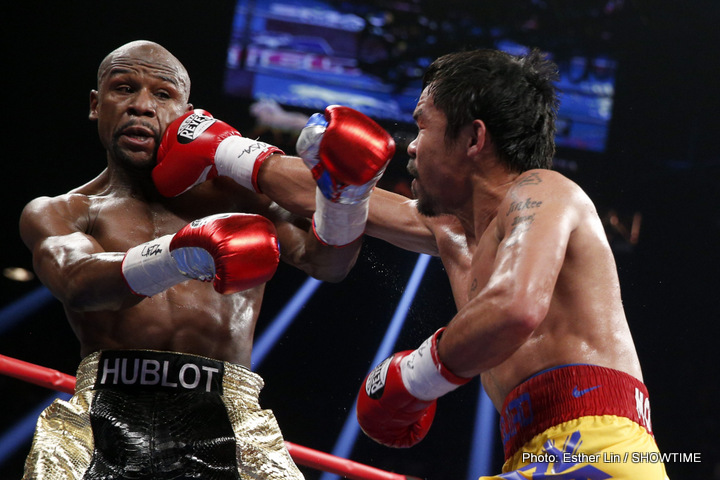 By Allan Fox: Floyd Mayweather Jr. is still talking about his fight with Manny Pacquiao despite it being 2 years since he beat him in the “Fight of the Century” in May 2015 in a disappointing fight that some boxing fans believe hurt the pay-per-view industry in a major way. Mayweather blames Pacquiao for not doing his part in making the fight a compelling one for the fans.

Mayweather says he let Pacquiao win 2 rounds in the fight. The thought is that Mayweather eased off the gas to allow the Filipino star win those two rounds. That was one of the arguments that fans had with Mayweather’s performance. It looked like Mayweather was coasting at times in the first half and the second half of the fight. He appeared to exert effort at times to win rounds, but then he would back off and coast and play it safe. Once Mayweather had a lead build up against Pacquiao, he coasted in the last part of the fight, making it very boring to watch.

“They say, yeah, Floyd, the fight didn’t live up to expectations. No, [because] he [Pacquiao] didn’t do what the [expletive] he’s supposed to do. I went out there and I did what I was supposed to do,” Mayweather said. “I kicked his [expletive]! I let him win two rounds, that’s it. I gave him two rounds.”

Some can argue that you can blame the boxing fans for making the decision to purchase the Mayweather-Pacquiao fight in high numbers. If the fans had done their homework, they would have known ahead of time the type of fighter Mayweather is. He’s always been safety first type of guy inside the ring, who takes very few chances by not mixing it up. If the fans had watched Mayweather’s fights against Marcos Maidana, Saul Canelo Alvarez and Robert Guerrero, they would have seen that he mainly just jabs and throws single pot shots. It’s not real exciting stuff. It’s just a guy with fast hands using his speed to land single pot shots. Mayweather’s fighting style reminds me a lot of Andre Ward, but without the wrestling/smothering tactics that he sometimes uses to win his fights.

Many boxing fans see Ward’s fighting style as being boring. It’s the same thing with Mayweather. If the fans had done their homework, they would have known what Mayweather’s fighting style is all about, and they could have concluded that he would fight in a safety first manner against Pacquiao. The unfortunate part about the Mayweather-Pacquiao fight is that the boxing public didn’t have a realistic idea of what the fight would be like.

The casual boxing fans likely expected Mayweather to stand still and be overwhelmed by Pacquiao throwing over 100 punches per round. The hardcore fans had a more realistic view of the fight. They knew that Mayweather would pick Pacquiao off with single shots all night long, and use movement to evade him. The knowledgeable boxing fans understood that Mayweather wouldn’t allow himself to be overwhelmed by Pacquiao’s high work rate. They knew he would move around the ring, and tie Pacquiao up frequently to keep him from throwing punches.

Mayweather’s next fight after the Pacquiao match was against Andre Berto in September 2015, and that fight brought in much lower PPV numbers than in his previous efforts. It showed that the boxing fans were not willing to buy his fight in high numbers and it’s thought that the fans were still upset with Mayweather-Pacquiao dud.

Mayweather could be fighting UFC fighter Conor McGregor next in a PPV fight. There are rumors that the ticket prices will be raised to sky high proportions once again, as they attempt to get the most profit from the fight. If this fight does happen, it’s quite possible that it will bring in much lower PPV numbers than originally thought. It’s a terrible match-up on paper with Mayweather fighting a guy that has never fought a boxing match in his life in Conor McGregor.

The fight would count on Mayweather’s record as a professional fight, so he can possibly win his 50th contest of his boxing career against a fighter with a 0-0 record. It’s crazy to imagine that the Nevada State Athletic Commission would allow Mayweather to go ahead with a fight against someone with no experience in boxing like McGregor. But even if the Nevada Commission said no to letting the fight take place in Nevada, you can bet that Mayweather and McGregor would take the fight to another state like Texas, where they could potentially still fight. If the fight is going to happen, there will always be a place for it to be staged. Not all of the states in the U.S will reject it.

I think there’s a huge lesson to be learned from other fighters from watching the Mayweather-Pacquiao. The lesson is that if you want to increase your star power in a high profile fight, you have got to be willing to do a fair amount of brawling in each round. That’s what the casual boxing fans want to see, which is why Gennady Golovkin has become so popular in such a short period of time. But if you play it safe by boxing and trying not to get hit, as we with Mayweather in his fight with Pacquiao, then you hurt your future popularity.

I think it’s imperative for safety first fighters to change their style for the high profile fights in order to win over the boxing fans and increase their fan base. They don’t have to fight in an exciting manner if they don’t want to, but they’re hurting themselves by limiting their own popularity. I think it’s probably too late for Mayweather to do anything. I doubt that his fight with McGregor will bring in the high numbers that he’s hoping it will. It might reach 1 million buys, but not the huge numbers that his fight with Pacquiao brought in. 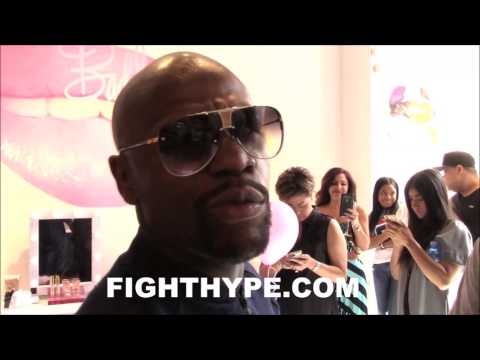 Joshua vs. Klitschko will be televised by HBO and Showtime »