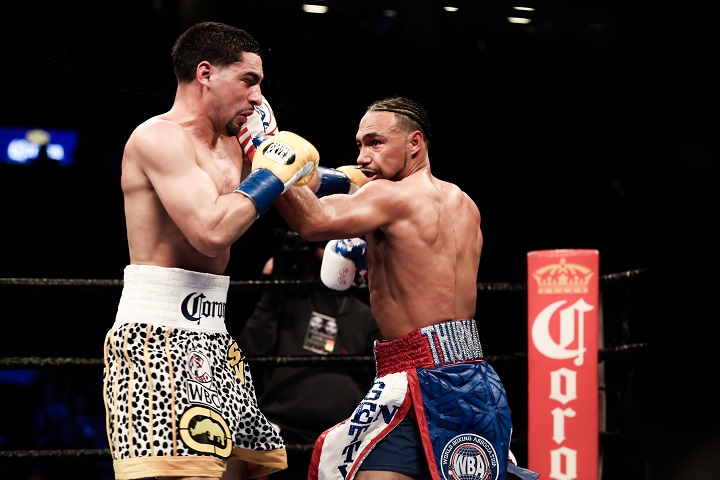 By Gav Duthie: In my opinion this has already been the best year of boxing in many a long time. The threat from UFC is real, flagging PPV numbers and general disillusionment with big fights failing to materialise or failing to deliver. Boxing is fighting back. To be just over 3 months into the year and had so many big fights is unprecedented these days. We have seen unifications between James DeGale and Badou Jack, Keith Thurman/Danny Garcia, Julius Indongo/Ricky Burns and not far off from Anthony Joshua v Wladimir Klitschko. The governing bodies are starting to work together, the television network game is changing and big fights are happening. Here is my best picks of the year so far.

For me this fight between two welterweight kings is the biggest of the year so far. This slightly shades Gennady Golovkin facing Daniel Jacobs a genuine #1 v #2 fight in the division. I feel that welterweight needed a definitive leader since the retirement of Mayweather. Pacquaio is still around but is on borrowed time so Keith Thurman v Danny Garcia was our best shout. Two undefeated fighters in their prime and both world champions. Whats more is the fight was free to air with Al Haymon. The fight itself wasn’t the best after an exciting first round but thats not the point. Appreciate the skill and artistry when the best fight the best. If you want action there is plenty of that every weekend but boxing needs definitive answers on who are the best fighters in each division. This set the bar, Kell Brook v Errol Spence is next.

A fantastic heavyweight encounter. This was another type of fight we need more of. Not because it was great, that was a bonus but because it was two top heavyweight prospects testing themselves. I know much more about Ugonoh from that one loss over his string of wins against nobodies. More heavyweights need this attitude to fight other good fighters and not just wait around for a title shot. If you haven’t seen this yet get on it. Ugonoh’s speed and double jab was impressive but his inexperience was telling. He was loading up on his shots too much and the more economical Breazeale would trade when necessary. Breazaele weighed almost 50 lbs more than his Polish opponent who started his career as a cruiserweight. They both traded knockdowns but Breazeale landed a superb right hand after a jab to the body and knocked the tired Ugonoh out in the 6th.

This was also a contender for fight of the year. It was toe-to-toe action from the beginning and Gonzalez was struggling with the bigger man, longer reach and solid punching and was knocked down when unbalanced in the first round. Although the fight was great and competitive it was clear to most that Gonzalez found his feet in the mid rounds and completely took over the fight. He wasn’t jabbing and moving he got right in there closed the distance and out landed in every department and should have defended his title. The WBC have ordered an immediate rematch but this loss should never have happened.

Oh how we have missed Mikey Garcia. He was doing things that Lomachenko is doing now only years before. Promotional issues meant that he didn’t box for two years and that was a big loss to the sport and now we can see why. Dejan Zlaticanin isn’t the best world champion but with a solid win over Ricky Burns and impressive knockout over Ivan Redkach he looked a solid proposition. Garcia was toying with him from the opening bell. The Serbian couldn’t get near him. I thought this would end up a wide unanimous decision but Garcia had other ideas with a perfectly timed counter right uppercut followed by a straight right when he was wobbled.

I am still surprised at this. All credit to Bellew he did a great job. Haye’s achilles injury was a factor but he was poor from the outset. He was extremely wild with his shots, missing big considering he usually has great timing. Perhaps knowing the achilles might rupture he went for the knockout early but Bellew took his time and found the shots to stop Haye in round 11. Bellew will likely fight for a world title next against Joseph Parker but for now he can just relax with his achievement.

The quality coming out of Ukraine just now is incredible. Following GGG is Oleksandr Usyk and Oleksandr Gvozdyk. I think light heavyweight is already the best division in boxing but Gvozdyk can add to it. He most recently destroyed Yunieski Gonzalez In 3 rounds and stopped the durable Isaac Chilemba last year, something Sergey Kovalev failed to do. I would love to see Gvozdyk against some of the other prospects like Artur Beterbiev or Joe Smith Jnr.

Its already been a top year. Anthony Joshua v Wladimir Klitschko is next up. There are some other big fights but the biggest would be Canelo v GGG. I can’t see that happening but i am happy to settle Ward v Kovalev 2, Brook v Spence, Canelo v Chavez and whatever else this great year has in store.