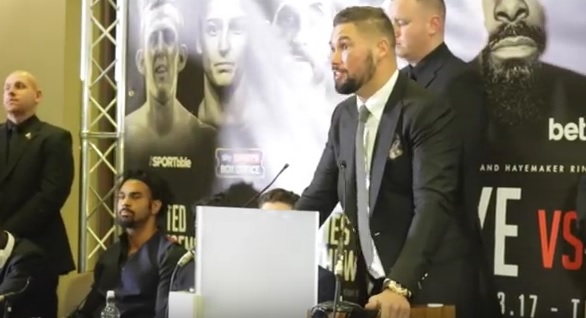 By The Commissioner: An all British heavyweight Pay-Per-View spectacular is almost upon us and casual boxing fans – I’d like to say ‘everywhere’ but really it’s mainly in the U.K. – are excited at the prospect of this Saturdays match up between Bermondsey’s ex-WBA Heavyweight Champion David ‘The Hayemaker’ Haye and Liverpool’s WBC Cruiserweight Champion Tony ‘The Bomber’ Bellew at the O2 Arena in London. In a fight which bookies heavily favour the home fighter David Haye, the casual boxing fan is hoping to see fireworks whereas the more hardcore fight aficionados are just hoping to see some competitive action.

I personally believe that writing off Tony Bellew is unwise, I can’t argue with the logic of that view but I would suggest that persons who hold this belief remember a couple of fighters from yesteryear; Michael Spinks and Evander Holyfield.

Now I am not suggesting that Tony Bellew the Blue is a modern day reincarnation of quite possibly, two of the best Cruiserweights we’ve ever seen, what I am saying is that this particular mountain has been scaled before and it was a lot bigger than the incline Bellew is currently faced with.

Michael Spinks came up from Light Heavyweight to take the title from a 49-0 Larry Holmes; arguably the most underrated, under appreciated and technically flawless heavyweight since Queensbury rules were introduced. No one gave Spinks a chance back in 1985 and for good reason, it was unfathomable to even the most ardent ‘Jinx’ supporter that he would dethrone the man who had beaten Muhammad Ali and was on course to surpass Rocky Marciano’s record of 49 fights undefeated. But that’s exactly what Spinks did, in a fight that was named Ring Magazine Upset of the Year.

Holyfield was given slightly more of a chance in 1990 when he faced the humble Tyson conqueror James ‘Buster’ Douglas. Perhaps Douglas wasn’t perceived as invincible as Holmes was 5 years earlier or maybe it was just the fact that boxing fans had already seen the impossible happen not too long ago that made it less surprising in general. In Evander’s case, it was the wins he chalked up after acquiring the HW belt that made his capture and subsequent reign more astonishing upon reflection.

Holmes and Spinks stayed at Heavyweight after they arrived, Bellew doesn’t plan to. This makes me wonder – other than money – what does the fight do for each of them? In my opinion it is a pointless match up for either guy at this moment in time. For me, Tony hasn’t even proved he is the best at the weight he currently holds a belt in and David is yet to have a bout since his ‘comeback’ that actually justifies him being considered in the top 10 of any governing body. If Bellew wins on Saturday he can’t tell anyone he’s proved anything other than he can beat David Haye. The Hayemaker can’t say that he’s shown anything other than the fact he can beat a guy that campaigns at a weight below. There is literally nothing to be gained by either man by winning this Saturday night. Other than the money of course, which is all well and good, after all if I was stepping in with either guy it would be for cold hard cash, not for the good of my health.

Haye looks like a man who finally knows his body after 15 years as a professional athlete, he looks comfortable with himself but perhaps some doubts are starting to creep in. He has been seen at the press conferences getting agitated and letting Tony get under his skin. Many people tend to read too much into things when a fighter gets visibly riled but there are cases when it can be used to give an indication as to how the fight’s going to go, Froch v Groves being the prime example.

At this very moment, Haye as a fighter is at his most vulnerable. He is 36 years old, his body has taken some serious reconstructive surgery and has been out of the ring so long that it’s going to take more than 3 rounds against bin men to clear the pistons and get the motor running again. He may look like the Haye of old for the first few rounds but if Bellew stays away from his big shots for the first half of the bout, how will he cope if Tony then ramps it up in the last half of the fight? Will he match him or will he or his body crumble? Physiologically how will he handle any slight twinge he feels in his shoulder when he’s throwing leather?

Then we look at Bellew. What will his game plan be? Will he endeavor to box in the hope he can avoid the power of the more natural heavyweight he is sharing the ring with? People can accuse the Liverpudlian of lacking skill, not having a chin, being a bit tubby around the middle but no one can question his heart or his desire to go into the trenches. The guy is relentless, the only way to stop him is to stop him. Tony is no slouch in the power department himself as we have recently seen in his last two fights against Ilunga Makabu and Flores, although he campaigned at Light Heavyweight for a decent chunk of his career, he is clearly a natural Cruiserweight and his subsequent performances since settling there has proven as much. Weighing in over the HW limit may provide a boost to the power he already possesses and in turn could make for a very interesting fight if he can find a way to land his shots against the elusive Haye.

In summary, the fight isn’t as one sided as the hardcore boxing public would suggest. There is a certain amount of intrigue which is what these kind of match ups are about. I am not going to sit here and explicitly say that David Haye will not finish Tony Bellew early, because that’s possible in any fight that The Hayemaker participates in, what I will say is; don’t write the fight off because there are a lot of variables to take into consideration.

Looking into my crystal ball I can see the early rounds being dominated by Haye; Bellew will be too cautious and worried about being caught with one of the huge shots Haye will inevitably be throwing. The Cruiserweight champ’s game plan is to maintain distance, keep a tight guard and let Haye throw until he’s tired. The crux of the fight will be decided here; whether or not Bellew can avoid The Hayemakers shots until the middle rounds. If he can’t then it will be game over for Tony Bellew within the first 3 rounds.

If Haye doesn’t land anything significant in the first 3 then we will see Bellew step up his work rate in the middle rounds, opening up more and trying to get close to land some big shots of his own. Being aware of Bellew’s temperament, I envisage that he will start to take risks and try to take Haye into the trenches, more prove a point than because he actually needs to, especially if he has taken some big punches from David and has managed to survive them. This will only serve to lull Tony into a false sense of security because I believe Haye will have enough to see the fight through the full 12 rounds if required although I don’t believe it will be.

In losing his cool and trying to spark a dog fight, Tony Bellew will be caught in the mid to late rounds by a powerful Haye shot which he won’t be able to get up from.

Thanks for reading, leave your feedback in the comments. Be cool, be safe, be you.