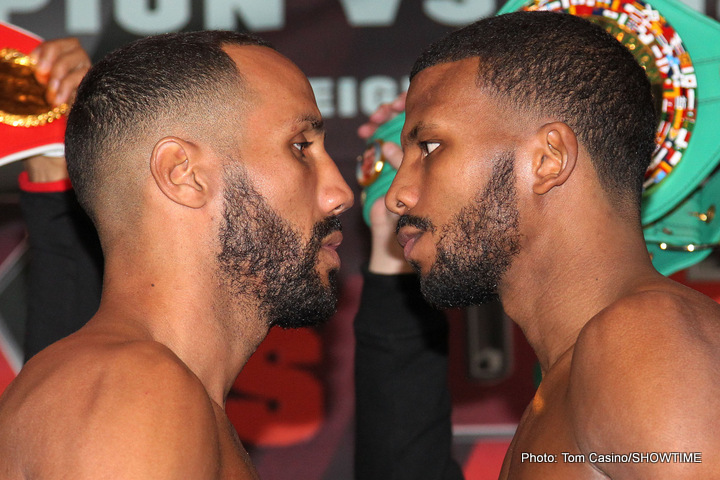 Jack weighed in slightly more at 167 ¼ pounds. By the time the two fighters rehydrate for Saturday night’s fight, Jack should be the bigger guy. DeGale doesn’t tend to put a lot of weight on between them.

During today’s face-off, Jack looked like he wanted to pounce on the rail thin DeGale when they were standing face to face. You could tell Badou means business. He seemed to stare right though DeGale with his laser beam eyes, like he wants to tear the 30-year-old fighter apart. Both guys looked in top shape at the weigh-in. Neither was what I would call dehydrated looking. I mean, DeGale looked a little drawn in the face from having restricted his fluid intake, but I don’t expect him to be weight drained on Saturday night. He’s not going to have that problem on Saturday night.

I do think DeGale is going to have his usual energy issues though, but that’s not because of him struggling with the weight. DeGale just doesn’t have a very good engine. He doesn’t seem to be a full 12 round fighter. He’s more of a six-round fighter than a 12 rounder, which is not good news for him because Jack has great stamina and can fight hard for 12 full rounds without gassing out. Badou would have been the perfect guy to fight 15 round fights if boxing still allowed those types of contests.

What I want to see is how DeGale handles the extreme pressure that Badou Jack is going to be putting on him. Badou is just relentless with the way he goes after his opponents. We saw that in Badou’s past fights against George Groves, Anthony Dirrell and Lucian Bute. Badou never stopped coming forward, throwing powerful shots to the body and missing his punches well to the head. Groves tasted the canvas in the 1st round from one of Badou’s hard shots.

I don’t think Groves ever recovered from that knockown, as he was just a shell of himself in the last 11 rounds of the fight. Badou made sure Groves couldn’t get back into the fight by pounding away at his body with a ferocity rarely seen in the sport. Badou’s body punching turned Groves red in the face, and he looked like he wanted to quit. Thankfully, Groves didn’t quit on his stool or have his trainer throw in the towel. It’s always bad when fighters quit or when their trainers throw in the towel when the going gets tough.

If DeGale is going to have his hand raised in this fight, he’s going to need put out some effort. He can’t be the typical lazy DeGale we’ve seen in his recent fights. DeGale fights hard for about a minute of each round, and then spends the other two minutes resting his backside against the ropes. It’s sad to see.

I don’t know why DeGale’s trainer puts up with it, because I would be reading him the riot act in between rounds to get him to stay off the ropes and put in some effort. DeGale is facing the WRONG guy for him to get lazy against. If reverts to form and tries to the old resting bit against Badou Jack on Saturday night, he’s going to have his backside handed to him on a silver platter. I’m just saying. Badou is going to pound DeGale into submission in a royal fashion of DeGale can’t fight for the full three minutes of each round.

The first time DeGale tries to take a rest break against Badou, he’s going to be a sitting duck for him, because Badou is going to punch holes through his midsection with his body shots. Badou puts his entire body into his body shots he throws. It just looks hurtful the way he’s able to get every ounce of energy into his body punching. Badou is one of those throwback fighters that you saw in the 1950s that liked to throw body shots all night long. He’s a real nightmare, especially for a lazy fighter like DeGale, who can’t stay off the ropes for some reason.

The winner of the DeGale vs. Jack fight will be the unified champion in holding both the IBF and WBC titles. However, there are still two other belts that the winner can go after in shooting for the WBA strap and WBO titles. DeGale has made it clear that he wants to fight George Groves if he can win the WBA belt in his upcoming April fight against Fedor Chudinov. WBO champion Gilberto Ramirez may prove to be too good for DeGale, because he’s got a lot of size, reach, mobility and youth going for him. Ramirez may be the best fighter in the 168lb division today. He just needs to get back into the ring.

In other weights on the card, IBF super featherweight champion Jose Pedraza weighed in at 129 ½ pounds for his title defense against the talented knockout artist Gervonta Davis. For his part, Davis, who is promoted by Mayweather Promotions, weighed in at 129 pounds. Pedraza has been an excellent champion thus far, but I think he’s met his match in Davis, who I rate very highly. Pedraza is going to have to throw some power shots in this fight to keep Davis off of him. Pedraza usually throws little more than jabs in his fights, and that’s often all he needs for him to get decision victories. Davis is a whole different kettle of fish. He’s going to be bringing it for 12 rounds, and if Pedraza can’t do more than jab, then I see it ending badly for him.


« Canelo Alvarez fights Chavez Jr. on HBO PPV on May 6