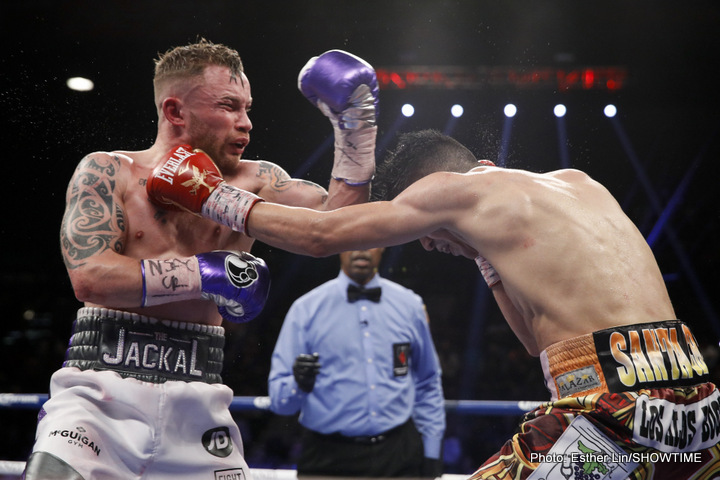 By Scott Gilfoid: Former WBA super bantamweight champion Scott Quigg (32-1-2, 24 KOs) says he wants either a rematch against Carl Frampton or a title shot against newly crowned WBA Super World featherweight champion Leo Santa Cruz (33-1-1, 18 KOs) in his next fight. Quigg wants either one of those fights.

Quigg is ranked #5 WBC, #8 WBA in the featherweight division after beating Jose Cayetano on December 10 last year to win the vacant WBA International featherweight title in his first fight back since suffering a broken jaw in a 12 round split decision loss to Frampton on February 27 in 2016.

Santa Cruz saw Frampton’s loss to Santa Cruz last Saturday night, and he noticed that he made no adjustments after failing behind in the first five rounds. Frampton just kept doing the same thing. Frampton did actually make some adjustments in the last two rounds in taking the fight to the inside. Unfortunately for Frampton, he was ineffective on the inside, as he only smothered his own work by standing too close to Santa Cruz.

“I scored it 116-112; I thought eight rounds to four to Santa Cruz. I thought he was in control from the start,” said Quigg to skysports.com. “I was very, very surprised that Frampton didn’t try to adapt or do something different, especially after five or six rounds. It was just the same pattern of the fight.”

Well, the 8 rounds to 4 score was a little closer to the scores that I had for the Frampton – Santa Cruz fight. I scored it 10 rounds to 2. There were some close rounds, to be sure, but Frampton blew his chances to win most of those rounds due to his nasty habit of running each time Santa Cruz looked to initiate action. You have to remember that this fight was held in the United States. This wasn’t in the UK. The boxing fans in the U.S expect their fighters to stand their ground and actually throw punches and not run from their opponents when they look to initiate some actual fighting.

By being seen running from the battle, it made Frampton look like he was in the retreat mode much of the time. You didn’t wars when you throw up the white flag and scurry from the battle field the way that Frampton was doing. I think that’s where Frampton lost the fight. He spent the last 20 seconds of many of the rounds running from Santa Cruz. If I was Frampton’s trainer, I would have read him the riot act in between rounds by telling him to stop running and start fighting. It would have been a different story, because I would have forced Frampton to go out on his shield. Who knows? Frampton may have still lost the fight, but he still would have given himself a better chance of winning. With the scores of the three judges that worked the fight last Saturday, I think Frampton would have won if he fought the way that I would have insisted on him fighting. Heck, the judges barely had Santa Cruz winning the fight by the scores 115-113, 115-113, and 114-114. I personally think those scores were very, very poor scores, because the fight was much more one-sided than those scores. The fact that the judges were giving Frampton the benefit of the doubt all night long, he wouldn’t have had to do much to get the win.

“I’ve been speaking with Eddie [Hearn]. We’re trying to make a big fight, maybe an eliminator for the WBA featherweight title,” said Quigg. I would love to fight Santa Cruz, but again I always want that rematch. Even though he got beat, I still want to settle the score.”

Is it really that easy for Quigg to get put in a WBA eliminator for a title shot against Santa Cruz? All he has to do is ask his promoter Eddie Hearn to put him in an eliminator and it’s a done deal? Quigg is ranked only #8 by the World Boxing Association at featherweight. What about all the guys that are ranked above him in the WBA’s rankings. Don’t they figure in for a WBA eliminator? To me, I think it would be fairer for an eliminator fight to involve guys rated higher than Quigg.

It just doesn’t seem fair if all Quigg has to do is ask to be put in a WBA eliminator and Hearn then makes it so. What about all the other contenders that have been waiting their shot ranked above Quigg? The WBA should be the one calling the shots for the eliminator bouts. An eliminator should involve top five ranked contenders in my view. I’m not against the 28-year-old Quigg being involved in a title shot, but only after the top five contenders have all been asked by the WBA if they’d be interested in fighting in an eliminator bout. If they say no to the idea, then Quigg should get a crack, but I don’t think he should get the shot above fighters that are ranked ahead of him. That would seem unfair to me.

Quigg gave Frampton a lot of problems with his pressure last year. The only reason Quigg lost the fight was because he started too late in making a comeback. He took it easy on Frampton in the first five rounds by giving him too much respect and not taking the fight to him. By the time he did start to rally in the 6th, he was way behind in the fight and wasn’t able to come fully back to get the victory.

I don’t think Quigg is going to be getting a rematch against Frampton anytime soon. Frampton and Santa Cruz could be facing each other in a third fight in Belfast, Northern Ireland. Santa Cruz has already told Frampton he’ll fight him in Belfast. Even if they don’t fight there, I still think they’ll face each other again. I don’t think Quigg is someone that Frampton is interested in fighting right now. Frampton is going to eventually fight IBF champion Lee Selby. That’s a fight that Frampton wants. If he can’t get a third fight against Santa Cruz, then he’ll likely take the Selby fight. If he beats Santa Cruz, then he’ll take the Selby fight. Quigg is more or less in the rearview mirror for Frampton. I do think they’ll fight each other sooner or later, but not soon.

Quigg needs to start fighting some talented featherweights to earn his way to a title shot rather than having Hearn immediately throw him in a WBA eliminator. I’d like to see Quigg prove himself against someone like Jesus Andres Cuellar. That would be a good fight for Quigg to prove himself.