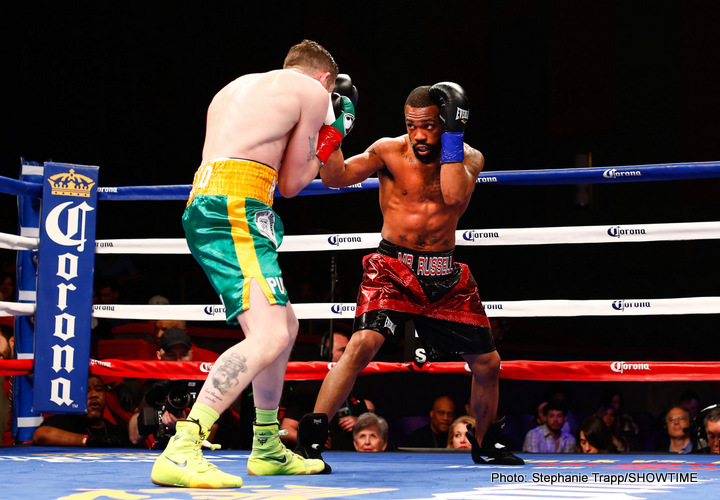 By Jeff Aranow: WBC World featherweight champion Gary Russell Jr. (27-1, 16 KOs) will be back inside the ring next month in defending his WBC title against 32-year-old Oscar Escandon (25-2, 17 KOs) at the U.S Bank Arena in Cincinnati, Ohio. This will be Russell Jr’s second defense of his title that he won two years ago with a 4th round knockout victory over former champion Jhonny Gonzalez in March 2015.

Russell Jr. has since defended his title once in beating fringe contender Patrick Hyland by a 2nd round knockout last year in April. That was the only fight for 28-year-old Russell Jr. in 2016.

“I hope to defeat Escandon without any problems. I plan to unify all the titles later and I want to do it soon,” said Russell Jr. to wbcboxing.com.

Russell Jr. has won his last three fights since losing to Vasyl Lomachenko by a 12 round majority decision in a failed attempt to win the vacant World Boxing Organization featherweight title in June 2014. Lomachenko was able to get the better of Russell Jr. by using constant movement for 12 rounds. In Russell Jr’s fights since then, he’s beaten Christopher Martin, Jhonny Gonzalez and Patrick Hyland.

What’s disappointing about Russell Jr. is how infrequent he fights. He fought just once in 2015 and once in 2016. Russell Jr. has fought just twice in the last two years. With activity level like that, it’s going to be hard for Russell Jr. to stay sharp. When could see some ring rust on Russell Jr. when he gets inside the ring with the 32-year-old Escandon on February 18. Besides that, Russell Jr. is hurting his own earning power by not fighting frequently enough to take advantage of his time as the champion. You would hope that Russell Jr. doesn’t regret not being active when he’s no longer a world champion, and having to be content with just being a contender once again.

Lomachenko used his movement and size to get the better of the speedier Russell Jr. When the two fighters were stationary, Russell Jr. looked like the better fighter. But once Lomachenko started using movement and his natural size advantage, he was then able to dominate the remainder of the fight to earn a 12 round decision. Lomachenko had the better boxing skills of the two. That wasn’t surprising news to most fans, as Lomachenko came into the fight as a two-time Olympic gold medalist from Ukraine.

Escandon has lost two out of his last five fights. He’s in the same boat as Russell Jr. in terms of activity level. In the last two years, Escandon has fought exactly twice. That’s not good for someone 32-years-old. Escandon needs to be busier with what’s left of his boxing career. He’s not going to be able to stick around forever if he’s going to be inactive like that.

Pacquiao’s adviser says he’s not giving up on U.S for future fights

WBO welterweight champion Manny Pacquiao’s adviser Michael Koncz is working on negotiations for his next fight on April 22. The fight is expected to take place outside of the United States, possibly in Brisbane, Australia, against unbeaten welterweight contender Jeff Horn (16-0-1, 11 KOs), who is co-promoted by Top Rank, the promoters for Pacquiao.

Pacquiao will be defending his WBO title for the first time since winning it against Jessie Vargas in his last fight last November. There’s also a possibility that Pacquiao could fight in Dubai or England, according to Fight News. It’s unclear who Pacquiao will fight if his next match is in either of those locations. Facing Horn in Dubai or England would be a waste of time, because he’s not a big name in those countries.

The pay-per-view numbers for the 38-year-old Pacquiao have been dropping since his third fight against Tim Bradley in April 2016. It’s thought that the market is no good for Pacquiao in the U.S nowadays. That’s perhaps why Pacquiao’s promoter Bob Arum is looking to bring him overseas to see if he can find greener pastures fighting guys like Jeff Horn. It would obviously help if Arum would start matching Pacquiao against bigger names outside of his Top Rank stable, but he doesn’t seem to be able to do that.

Arum has been putting Pacquiao in with his own fighters in his Top Rank stable with less than spectacular results. The Pacquiao-Bradley 3 fight did 400,000 buys, and Pacquiao’s last fight against Jessie Vargas did only 300,000 buys. Is that a sign that the PPV market is dying for Pacquiao in the U.S or that the boxing fans don’t like the match-making that’s being done for him by his elderly promoter Arum.

“We are not giving up on fighting in the States,” said Koncz to fightnews.com.