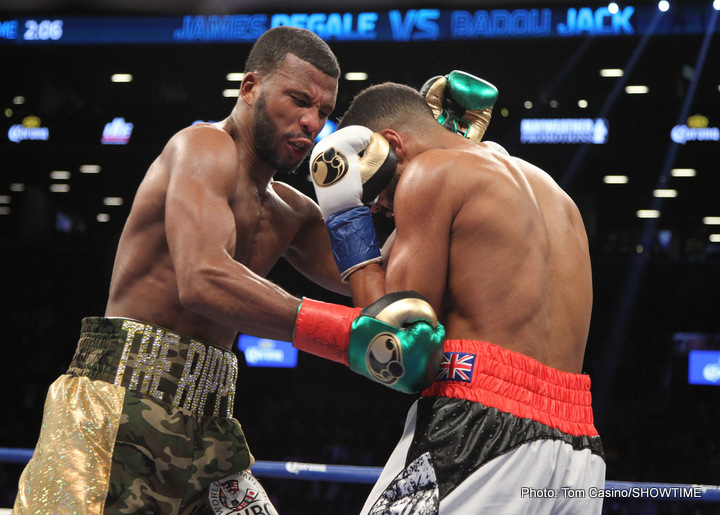 By Scott Gilfoid: Badou Jack (20-1-3, 12 KOs) has official vacated his WBC super middleweight title, according to the World Boxing Council. This move was not unexpected, as Jack, 32, had said that he planned on vacating the title last Saturday night after his 12 round draw against IBF super middleweight champion James DeGale (23-1-1, 14 KOs) at the Barclays Center in Brooklyn, New York.

Jack wants to move up to light heavyweight title challenge the top fighters in that weight class. Jack’s promoter Floyd Mayweather Jr. has immediate plans to have him fight WBC 175lb champion Adonis Stevenson in June.

It would be a great fight for Jack if he can get it, but the chances are likely that the fight won’t take place that quickly. Jack might need to get one or two fights under his belt before he gets a title shot against Stevenson. It would be nice news for the boxing fans if Jack fought for a world title straightaway against Stevenson, but it looks like the Canadian fighter is going to be facing Joe Smith Jr. next.

A fight between Stevenson and Jack may need to wait until either later this year or in 2018. Mayweather seems to know what he’s doing in moving Jack up in weight rather than having him remain at 168 to continue defending his WBC title.

Here’s what the WBC said today:

DeGale and his promoter Eddie Hearn both talked about wanting a rematch against Jack. Mayweather made it clear that any rematches between DeGale and Jack MUST take place at light heavyweight.