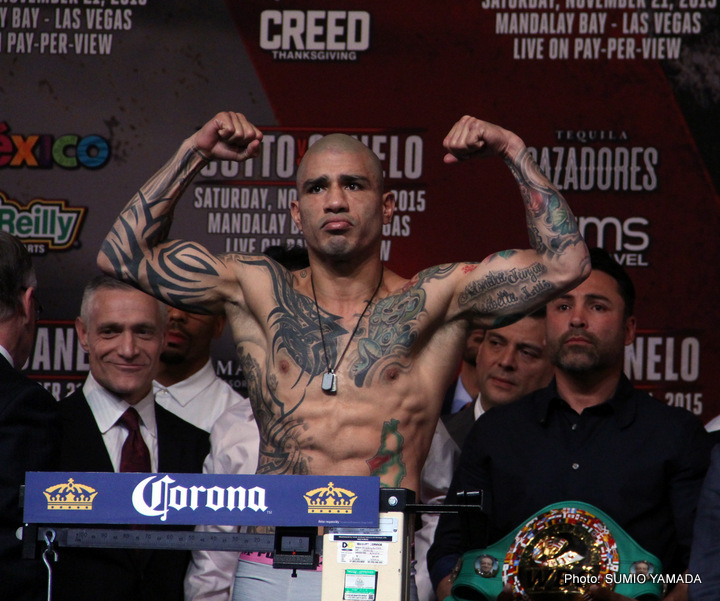 By Dan Ambrose: Miguel Cotto will be returning to the ring in two months from now on February 25 against James Kirkland on HBO PPV at the Ford Center at The Star in Frisco, Texas. The contract hasn’t yet been signed for the Cotto-Kirkland fight, but it appears the fight is going to happen.

Kirkland, 32, is from Texas, and he’s got a fan base there. Having the fight on HBO pay-per-view is the odd thing. The success of the Canelo-Kirkland fight might depend on the older boxing fans, who remember Kirkland from seven years ago when his career was doing well.

The younger fans will likely mostly know Kirkland for being the guy that Saul Canelo Alvarez knocked out in 3 rounds in May 2015. Kirkland did not look good in that fight. Sadly, that was the last time Kirkland fought. He’s been out of the ring for 1 ½ years. Normally, that would seem like a bad thing, but Cotto’s been out of action over 1 year since his loss to Canelo. So basically the Cotto-Kirkland fight is matching two inactive guys that are coming off of losses to Canelo.

Asking the boxing public to see the Cotto vs. Kirkland fight might be a real reach. I don’t know if this is the type of fight that will attract a lot of fans to purchase it. Are there still a lot of old Cotto (40-5, 33 KOs) and Kirkland fans that will want to pay to see them fight each other? I think it would depend whether those fans have been following the sport closely enough to realize that Kirkland rarely fights nowadays. He’s only fought twice in the last 3 years. That’s not good. Cotto has been a little more active than Kirkland, but not much.

“We tried to do other fights, but you know how the business is,” said Miguel Promotions executive Bryan Perez to espn.com. “Kirkland was there, he was willing to fight Miguel, he makes good fights, and we made the fight. Miguel will do his best to give a great show and an exciting fight. Miguel is back in the ring and we are all excited,” Perez said. “Like he always does, Miguel wants to go in the ring and put on a great show.”

This was reported by RingTV and the Dallas Morning News. The venue seats 12,000, and it’s obviously not nearly as large as the 80,000 seat AT&T Stadium in Arlington, Texas, which is where Mexican star Saul Canelo Alvarez recently fought WBO 154lb champion Liam “Beefy” Smith in front of 51,000 boxing fans.

“The framework has been talked about and we’re waiting for a written contract so that all the terms are confirmed,” Kirkland’s manager Mike Miller said to RingTV.com. “We understand the contract is forthcoming. I’m just waiting for the final terms.”

Ann Wolfe, Kirkland’s trainer from the past, could be the one that potentially trains him for the Cotto fight. There’s not a whole lot of time for Kirkland to get ready for the fight. The fight hasn’t been signed yet, so you’ve got to figure that Kirkland won’t start training until after the contract is signed. For Kirkland’s last fight against Canelo, he looked huge before he started training camp.

Kirkland eventually got the weight, but you have to wonder whether his performance – and ring rust – was a factor in him getting knocked out so quickly by Canelo in that fight. Before Kirkland’s fight against Canelo in 2015, he’d been out of the ring since 2013, when he beat Glen Tapia by a 6th round knockout. Before that fight, Kirkland had been out of the ring for 19 months. Kirkland isn’t enough for him to stay sharp in any real way. Cotto is pretty bad in that area as well, but nothing like Kirkland.

The big question is why isn’t Cotto fighting one of the relevant contenders or champions in the 154lb division? Why fight Kirkland? The time for Cotto to have fought Kirkland would have been in 2009 and before that. Fighting Kirkland now just seems strange. Cotto might as well try and get Sergio Martinez out of retirement so he can fight him, because it’s pretty much the same kind of thing.

The only thing positive you can say about Cotto fighting Kirkland is that he’s probably going to win the fight, and win by a knockout. It would make a lot more sense if Cotto were to fight a toip contender in the junior middleweight division like Demetrius Andrade. If Cotto didn’t want to take on one of the champions at 154, then fighting a top contender would make more sense than fighting Kirkland.

Hopefully, Cotto isn’t turning into a fighter who just hand-picks older fighters for easy paydays or guys that old and broken down. We did see Cotto target Sergio Martinez 2014 in fighting him for his WBC middleweight title rather than Gennady “GGG” Golovkin. Martinez was 39-years-old at the time, and he hadn’t fought in the last 14 months.

Just why the World Boxing Council didn’t strip Martinez of his middleweight title is unknown, because they probably should have. The WBC sometimes changes the status of their champions to ‘Emeritus’ champions when they’re injured for an extended period of time the way that Martinez. But for some reason the WBC kept Martinez as their WBC 160lb champion despite him being injured and out of the ring for over a year.

Cotto is said to be retiring after 2017. It would be nice if Cotto went out with a bang by taking on Golovkin or one of the top 154lb champions. Fighting Canelo again doesn’t make sense, because Cotto hasn’t been active and he’s fighting relevant fighters. A rematch between Cotto and Canelo would look to some fans as a money grab fight rather than a match-up to prove someone is the best fighter in the 154 or 160lb division. It would be more interesting for a lot of boxing fans to see how well Cotto does against Golovkin. If Cotto wants a rematch with someone, then he should look to fight Floyd Mayweather Jr. or Manny Pacquiao again.


« Eric Molina: I need a KO to beat Joshua