Eric Molina: I need a KO to beat Joshua 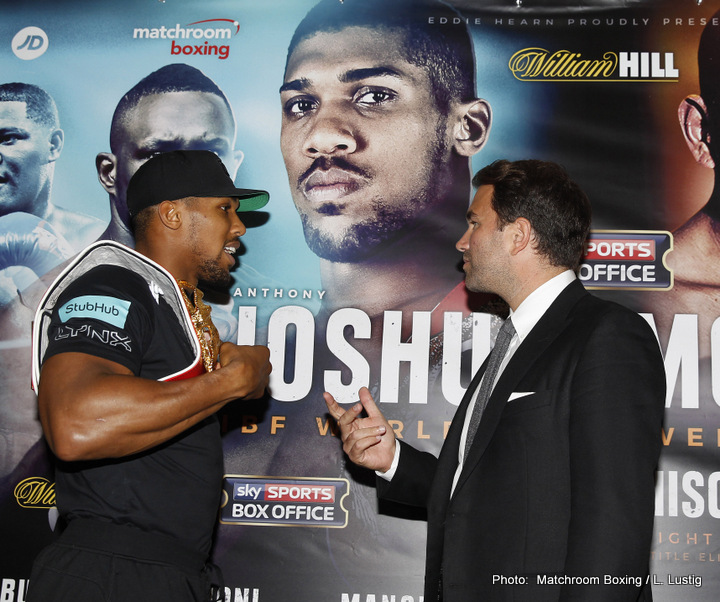 By Scott Gilfoid: #8 IBF contender Eric Molina (25-3, 19 KOs) realizes that his only chance of beating IBF heavyweight champion Anthony Joshua (17-0, 17 KOs) this Saturday night is if he knocks him when the two fighters face each other at the Manchester Arena in Manchester, UK. Molina, 6’4”, will be the visiting fighter walking into the lion’s den in this fight. That means there will be very few Molina fans when he gets inside the ring with the 27-year-old Joshua.

There will be a lot of cheering when Joshua lands his shots and likely next to no applause for Molina when he does anything good in the fight. You can argue that judges tend to pick up their cues in who to score the fight for based on the cheering of the crowd, Joshua would seem to be in a very good position to win this fight on Saturday night if it goes to the scorecards, which is why Molina doesn’t plan on letting the fight go the distance.

The 34-year-old Molina has got the punching power to KO Joshua or anyone in the heavyweight division. Molina has just got to get to Joshua’s chin before he lands his own power shots. If Molina can’t ramp up his offense early on Saturday night, then it will be bad news for him. Joshua always starts quickly, and he’s going to have a ton of boxing fans encouraging him to score a quick knockout.

“Knockout is the only way I am going to win,” said Molina. ”I’m not here to take it on points, I am here to put him on the floor and take his belt. Any heavyweight can KO any other heavyweight, and I can KO Joshua. I’m a hard-punching heavyweight so I am extremely confident.”

Well, it’s already been proven that Joshua can be hurt. We saw that in 2011 in his fight against Romanian Mihai Nistor. Joshua was out on his feet in the 3rd round of that fight. Nistor didn’t waste any time in going after Joshua’s chin to try and KO him in that fight. He did a good job of landing his power shots. Nistor was quick on his feet in coming forward to nail Joshua with big punches and then getting to the outside before he could do much.

Molina is a little slower in his movements. He tends to stay in the pocket more, which makes him vulnerable to getting hit. Molina will hopefully have worked on being fast in getting in and out of range for the Joshua fight. If not, then he’s going to getting wiped out on Saturday unless he can land something big in the first two or three rounds.

“There are things about him we don’t know yet,” said Molina about Joshua. “That missing piece of the puzzle is the chin. Can he take a punch? He hasn’t taken anything up to this date. A good boxing puncher can KO you with a shot at any given moment.”

I don’t think Joshua’s punch resistance is any better than any other heavyweight in the division. If Joshua gets hit a lot, he’s going to get knocked out. I think it’s as simple as that. The shots that Dillian Whyte absorbed in his loss to Joshua in 2015, I think they would knocked Joshua out within two or three rounds. I don’t think his chin is as good as Whyte’s. We saw how Whyte dropped Joshua twice in their fight in 2009. Nothing has changed since then other than Joshua hasn’t fought any heavyweights with power since he turned pro other than Whyte, who suffered a shoulder injury in the 2nd round of their fight. Look at the guys that Joshua’s promoter Eddie Hearn has matched Joshua up against in his last 10 fights. None of them are real punchers. You think that’s by accident that Hearn hasn’t been putting Joshua in with guys with no power? I don’t. I think Hearn has been looking out for his golden goose Joshua by not matching him against power punchers. Molina is really the first true power puncher that Joshua will have faced, and he recently knocked out by Deontay Wilder last year. I don’t think for a second that Hearn would have put Joshua in with Molina if he wasn’t knocked out by Deontay last year.

“I’m unpredictable – and any man in this division can be KO’d on any night,” said Molina. “To become champion, that’s the ultimate goal, and I think I have what it takes to knock him out. I don’t question his stamina, but I do want to see him take a good shot. It’s the big question.”

Well, if Molina wants to see Joshua take a good shot, then he needs to go after his chin straightaway in this fight rather than waiting until the 10th round like he did in his last fight against Tomasz Adamek. Molina was too slow in going after Adamek with his power shots. Molina was focusing on his boxing rather than his power until the 10th. He can’t do that on Saturday night against Joshua, because he’ll be blasted to smithereens in the first three rounds.

I seriously do not see Molina making it past the 3rd round if he fights like a timid rabbit inside the ring. Molina needs to forget about the crowd and forget that Joshua is a world champion. Molina needs to realize that Joshua is still the same fighter that Mihai Nistor and Robert Cammarelle arguably beat. There’s no difference. The only thing that’s happen since then is Joshua has won a controversial gold medal in the 2012 London Olympics and beaten 17 weak heavyweights since he turned pro. Joshua is totally untested in the pro ranks, and he’s got the controversy of his gold medal following him around.

“I’ve hurt everybody that I’ve been in the ring with,” said Molina. “Does he have grit and determination? We’ll find out.”

Molina’s past sparring with Deontay could help him in this fight, because he learned how to fight a tall heavyweight from that experience. Deontay is taller than Joshua with better hand speed and power. If Molina was able to handle Wilder’s attacks in his sparring with him, then he should have no problems with Joshua.