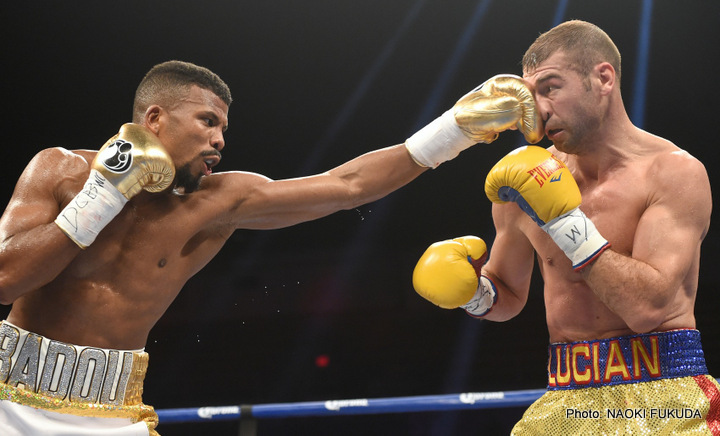 By Allan Fox: Unbeaten Eleider Alvarez (20-0, 10 KOs) and former IBF 168lb champ Lucian Bute (32-1, 25 KOs) will fight each other on February 24 at the Videotron Centre in Quebec City in Canada. The winner of the Bute-Alvarez fight will be getting a shot at WBC light heavyweight champion Adonis Stevenson on April 29.

That might not be a good thing if the soon to be 37-year-old Bute wins, because he might not be much competition for a puncher like Stevenson. Bute will have been out of the ring for 10 months by the time he faces the 32-year-old Alvarez on Feb.24. That’s not good news for Bute, because he’s not the young fighter that he was when he held the International Boxing Federation super middleweight title from 2007 to 2012.

Eleider is already the #1 WBC mandatory challenger for Stevenson. It’s just that he’s been waiting for his shot at the aging 39-year-old Stevenson for a while now. By facing Bute, Eleider can stay busy, get a payday, and get more prepared for his eventual title shot against Stevenson.

The winner of the Alvarez vs. Bute fight is supposed to get Stevenson next. Whether that happens is the big question. It would be sad if they need to wait a little longer before they get the fight against Stevenson. The World Boxing Council could make things easier if they force the issue if Stevenson chooses to take another voluntary defense. Stevenson doesn’t have much to fear in the winner of the Alvarez-Bute fight, because he appears to be the better fighter than both of those guys. The real threats to Stevenson are fighters like Artur Beterbiev, Andre Ward, Oleksandr Gvozdyk and Sergey Kovalev.

Eleider has a fight this Saturday night against Norbert Dabrowski at the Montreal Casino in Montreal, Canada. Eleider is expected to win that fight without any problems. This is not supposed to be a competitive fight for Eleider. However, Eleider has not always shined in his fights. He’s someone that isn’t going to walk through too many of the fighters in the 175lb division. It wouldn’t be surprising if Eleider lost to Dabowski or Bute, because he’s a flawed fighter.

According to RingTV, promoter Yvon Michel is confident that Alvarez will fight Stevenson on April 29. He also feels certain that Bute will as well, but there’s a chance that Stevenson could take on someone else. This means that the WBC would have to step in if he chooses not to take the fight. The WBC might not do that, so the winner of the Alvarez-Bute fight still might not be next for Stevenson.

Michel said this to RingTV.com about the winner of the Alvarez vs. Bute fight facing Stevenson:

Bute wants to also fight the winner of the unification fight between WBC super middleweight champion Badou Jack and IBF champion James DeGale. However, the winner of that fight will need to face their mandatory challenger Callum Smith next, so Bute would need to wait. At least by fighting Alvarez, Bute stays busy and can potentially get a fight against Adonis Stevenson at 175 if he wins. Bute has already faced DeGale and Jack and came close to beating both of them. Stevenson would be a lot tougher task for Bute due to his punching power, size and speed.