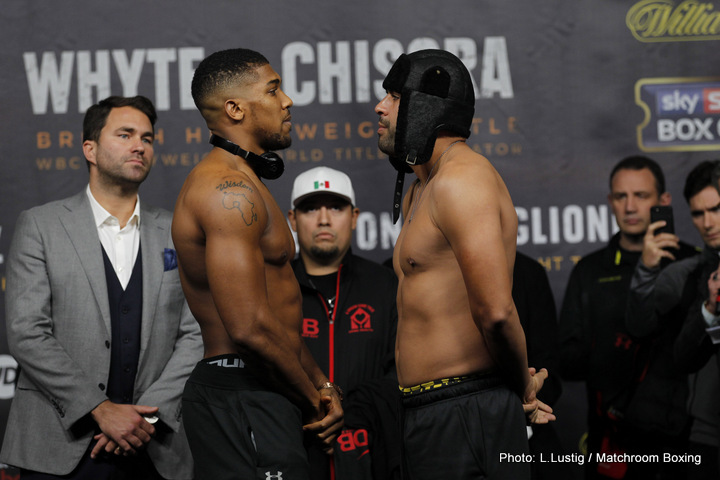 By Scott Gilfoid: Carl Froch believes that IBF heavyweight champion Anthony Joshua will take care of Eric Molina this Saturday night and stop him at some point in the fight. Froch thinks that Joshua (17-0, 17 KOs) should focus on his boxing and keeping the hard hitting 34-year-old Molina (25-3, 19 KOs) so that he doesn’t get hit by one of his powerful right hands.

Froch isn’t quite sure how well the 6’6” Joshua will take the big right hand shots from Molina, but he suspects he’ll be fine. Froch points out that Molina staggered WBC champion Deontay Wilder with a right hand in their fight in 2015. Molina eventually was stopped in the 9th round after Deontay hit him with some right hands of his own.

Froch didn’t point that out. He also didn’t mention how Deontay knocked Molina down three times. Those were on the rare occasions that Deontay used his right hand in the fight. Almost every time Wilder would land a right hand, Molina would go down. It’s interesting how Froch and Joshua aren’t aware of the particulars of the Wilder-Molina fight.

Froch said to IFL TV this about the Joshua vs. Molina fight:

“I think it’s routine enough, but he’s got to be careful,” said Froch about Joshua’s title defense against Molina. “Molina, he packs a punch, doesn’t he? Joshua has to box and move and use his jab, use his feet. Keep him out of range, I think for 3, 4 or 5 rounds. if it goes the distance, Joshua is fit enough to go the distance, and have it all his own way, but it’s heavyweight boxing. That right hand from Molina that rocked Deontay Wilder and gave him trouble. He keeps talking about it, so he’s definitely going to be looking for it. He’ll probably land it. It’s just how Joshua reacts to the shot landing. I think he’ll take it and be OK,” said Froch.

Molina does have the punching power to score a knockout over Joshua, but he waits too long before throwing his shots. Molina rarely threw his power shots against Wilder. In Molina’s last fight against Tomasz Adamek, he waited until the 10th round to start opening up with power shots. By that point in the fight, Molina was so far behind on the scorecards that he literally needed a knockout to win.

If Molina doesn’t start throwing his bombs in the 1st round against Joshua, he’ll get knocked out immediately, which is what I see happening. Joshua will TKO Molina in the 1st round. The boxing fans will make a big fuss, as if he beat a good fighter. The reality is Joshua will have beaten a guy that Chris Arreola knocked out in 1 round. Deontay would have done the same thing if he had used his right hand in the 1st.

In speaking about Joshua’s planned fight against Wladimir Klitschko in April 2017, Froch said, “I don’t know what Klitschko has got left, to be honest. If it happened now, it would be great, but next year? I think Klitschko needs to box, to fight somebody before that happens or I don’t think he’s going to take the fight. I’m trying to get in the mind of Klitschko. Why does he fight Joshua? I know he doesn’t want to leave his career with that loss against Tyson Fury, because who would want to go out like that? But to come up and lose to the next young and up and coming heavyweight, it’s really going to destroy his legacy. I think if it happens, Joshua beats him,” said Froch.

I think it goes without saying that Wladimir Klitschko should be looking to get some tune-ups in before he faces Joshua next year. Froch obviously realizes what I’ve been pointing out all along about Wladimir – that he needs to take some tunes-ups before he faces Joshua. Wladimir hasn’t fought since last November in his loss to Tyson Fury. In trying to figure out why Wladimir would be willing to fight Joshua after a long layoff with no tune-ups, it’s hard for me to see it any other way but Wladimir choosing to cash out with his career in taking a big payday. Why would Wladimir not take a tune-up or two? He’s almost certainly going to lose to Joshua under those circumstances.

Yeah, Joshua’s boxing fans will go crazy for him after the win over Klitschko, but it’s not as if he’s fighting a young version or a sharp version. Wladimir will be 41 in March. He’s not the fighter that he once was. The only thing I can think of for WHY Wladimir is choosing to fight Joshua after a two-year layoff without a tune-up fight is that he won’t take as much criticism losing to him then he would if he fought a contender and got beaten. From the way that Wladimir looked in his last three fights against Fury, Bryant Jennings and Kubrat Pulev, I could see him getting beaten by a lot of the top heavyweights in the division. I don’t think Wladimir could beat guys like Luis Ortiz, Jarrell Miller, Alexander Povetkin, Bermane Stiverne, Dillian Whyte, Dereck Chisora, or David Haye. I know that Wladimir beat Povetkin and Haye in the past, but that was when he was a little younger. I think they all beat Wladimir right now.

Joshua will beat Molina and Klitschko, but that’s not saying much. The talents are guys like Deontay, and until Joshua fights him, he’s merely padding his record with soft jobs in my view.