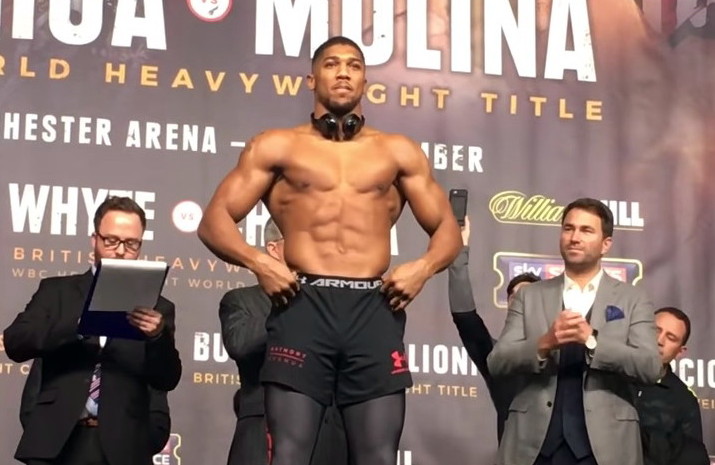 By Scott Gilfoid: IBF heavyweight champion Anthony Joshua weighed in on Friday at 249 pounds for his title defense on Saturday night against American Eric Molina at the Manchester Arena in Manchester, England. Molina weighed in at 237 ½ pounds, which is more or less in the same ballpark that he usually weighs in.

Joshua’s weight was within one-half pound of his career high of 249 ½ pounds that he weighed in for his fight against Gary Cornish in September 2015. If you remember that fight, Joshua bum rushed the 6’7” Cornish in the 1st round and blasted him out immediately.

With Joshua being so heavy for the fight, it appears that he’s going to be looking for a fast 1st round knockout on Saturday of Molina so he can impress his boxing fans. I’m not sure if it will though. It’s a pay-per-view fight, and clearly a designed mismatch.

How happy can the fans be in seeing the main event end in a 1st round knockout, especially after the fans paid to see it on Sky Box Office? I’m just saying. If you’re going to bring in a fringe contender like Molina, who was recently knocked out by Deontay Wilder, then it might be better to stretch the fight out.

What is Joshua’s boxing fans going to think if he blasts Molina out in one round? It’s not as if the undercard is filled with competitive and interesting fights. There’s pretty much just the main event and the heavyweight match-up in the co-feature between Dillian Whyte and Dereck Chisora. The rest of the fights on the card are not PPV worthy in my view. If you like super flyweight fights, then you might take interest in the Luis Conception vs. Khalid Yifai fight. My guess is most of the casual fans that see the card on Sky Box Office PPV and live at the Manchester Area are not going to have a clue about who those guys are.

Joshua said to Sky Sports News HQ this about his fight against Molina:

“Another step in the journey, little by little, we’re trying to make some history, stamp our name in the legacy books. Eric Molina is part of that journey, we don’t overlook anyone,” said Joshua. “The odds are saying I’m a favorite, but I don’t see it like that. I’m staying focused. I’m treating Molina like a real threat.”

Of course you’re the favorite, Joshua. Molina was picked out from the No.8 spot in the World Boxing Organization’s rankings, and even that ranking is inflated in my view. You’re fighting a guy that was blasted out just last year by Deontay Wilder and by Chris Arreola in the past. Heck, the only reason Molina lasted nine rounds against Deontay is because he was coming off of a badly broken right hand in his previous fight, and he rarely used his right hand against Molina. If you look at that fight, Deontay almost exclusively used his left hand against Molina.

When Deontay finally did start using his right hand in the 9th, he knocked Molina out immediately. But Deontay was throwing clubbing right hands rather than straight rights the way he normally does in his fights. Deontay’s right hand was so badly effected from his previous fight that he just didn’t have faith in using the weapon against Molina. I can only imagine what a healthy Deontay would have done to Molina. We’re probably talking about a 1st round knockout.

“I can’t go in there overlooking Molina. I can’t listen to what everyone says. I’m not involved in the hype, so I’ve got to take Eric Molina as a real challenger,’ said Joshua.

Joshua will be fighting 40-year-old Wladimir Klitschko in his next fight on April 29th in the UK, as long as he gets past Molina on Saturday night. That’s the fight that Joshua and his promoter Eddie Hearn are chomping at the bit to get at, because it will play out really well in the UK, even though Wladimir lost his last fight against Tyson Fury and hasn’t fought in over a year since November 2015. By the time Wladimir does fight Joshua, he’ll have been out if the ring for a year and a half.

The fact that Wladimir isn’t taking a tune-up to get ready for the Joshua fight has some boxing fans seeing this as little more than a cash out fight for him. In other words, a retirement payday fight. I don’t know what to think myself about it. I don’t understand why Wladimir wouldn’t want to take a two or three tune-ups to shake the cobwebs off for the Joshua fight.

It almost seems like Wladimir is in a rush to fight for the title. I can understand Wladimir wanting to try and get his lost titles back, but the fact that he’s choosing to take the fight after an almost 2-year layoff seems like a wrong-headed move. Further, Wladimir is taking the fight in Joshua’s home county of the UK rather than in a neutral country like the U.S or Canada. Why would Wladmir put himself at such a disadvantage for the Joshua fight?

Is Wladimir cashing out or does he really think it won’t be a big deal that he’s coming off of a long layoff and fighting in Joshua’s home country? It kind of reminds me of how Ricky Hatton came off of a long layoff of over two years to fight Vyaccheslav Senchenko in 2012. Hatton fought well for eight rounds before getting tired and knocked out in the 9th. There were no tune-ups for Hatton, which seemed odd, because it would have been the smart thing to do. 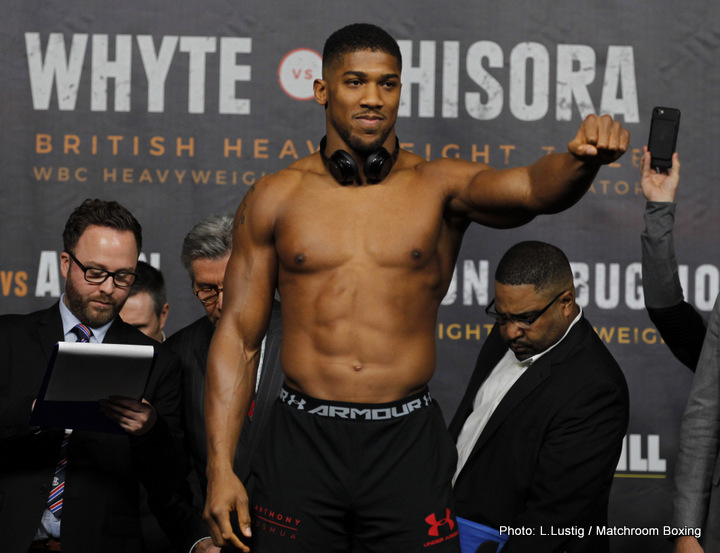 
« Joshua vs Molina: Joshua says he might toy with Molina