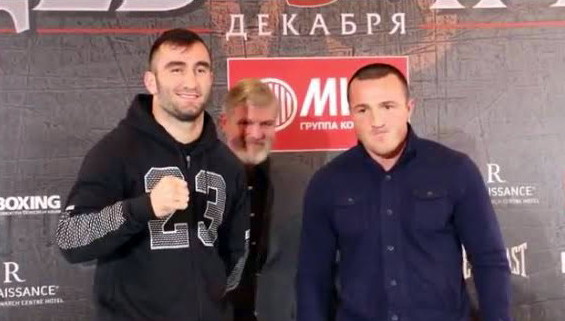 By Eric Baldwin: IBF, WBA cruiserweight champion Denis Lebedev will be taking on one of the toughest opponents in quite some time when he defends his titles against unbeaten Murat Gassiev this Saturday night at the Khodynka Ice Palace in Moscow, Russia. The 37-year-old Lebedev sees the fight as a 50-50 affair. His trainer Freddie Roach appears more certain of Lebedev (29-2, 22 KOs) getting the victory over the 23-year-old Gassiev (23-0, 17 KOs).

Roach compares the fight to the recent match between his fighter Manny Pacquiao and former WBO welterweight champion Jessie Vargas. The 37-year-old Pacquiao came into that fight as the much older fighter than the 27-year-old Vargas, and yet he still beat the younger guy. The difference here is that Gassiev is even younger than Vargas.

Gassiev just turned 23-years-old in October, and he’s also a big puncher. Vargas was not a favorite against Pacquiao. He was a light puncher with only 10 knockouts on his resume going into that fight.

Gassiev is really short on experience as a pro despite having fought almost as many fights in his 5-year pro career as Lebedev has in his 15-year career. Lebedev has not fought a lot for someone with a long pro career like his. Gassiev’s best opponents have come against Isiah Thomas, Jordan Schimmell, Felix Cora Jr., and Ismail Abdul. In comparison, Lebedev has fought Victor Emilio Ramirez, Lateef Kayode, Guillermo Jones, Roy Jones Jr., Marco Huck, Shawn Cox, James Toney, Santander Silgado, Alexander Alekssev, Pawel Kolodziej, Youri Kayembre Kolodziej, and Enzo Maccarinelli.

The experience level is so far tilted in Lebedev’s favor for this fight. It’s almost unfair. Gassiev clearly should have taken a few more fights before stepping up to this level, but his management obviously believes in him. We’ve seen fighters with extensive amateur backgrounds pushed quickly into world title fights like two-time Olympic gold medalist Vasyl Lomachenko and Olympic gold medalist Oleksandr Usyk. However, those fighters had a ton of experience in the amateur ranks compared to Gassiev, who had only 25 fights. He didn’t fight in the Olympics. He’s someone that has been developed in the pro ranks, and he still hasn’t faced a lot of top fighters. In fact, Gassiev hasn’t faced anyone in the top 15.

Gassiev’s fight against Lebedev will be his first exposure to fighting a top level guy. Gassiev’s experience might not be what it should be, but his incredible punching power might be enough to make up for the experience he lacks. Lebedev hasn’t faced anyone as a pro with the kind of power that that Gassiev has. Lebeev has faced some punchers though like Huck and Maccarinelli, but those guys don’t have the one-punch power that Gassiev possesses.

Roach said to Garneksports via Fight News about the Lebedev vs. Gassiev fight:

“I know what he’s up against,” said Roach about his fighter Lebedev facing the hard hitting Gassiev. “It’s really not the right style for Denis, I feel, but I feel good about this fight. It’s like Manny Pacquiao in his last fight. He wasn’t supposed to win, because the guy was a little younger and more active and so forth. He [Jessie Vargas] didn’t win, because the experience took over. I feel the same about this fight that the experience will take over. We’re facing a really tough guy, but that’s what boxing is all about. Maybe we’re a little bit older, yes, but we’re not that much older. He’s a good puncher, and he has very fast hands. People underestimate that, and don’t understand how hard he really hits. I know his opponent is a big puncher also, but we’ll see. Denis has a great chin. He’s very tough, and in great shape.”

Lebedev looked very good in his last fight against Victor Emilio Ramirez last May in stopping the IBF World cruiserweight champion in the 2nd round. That fight was supposed to have been a competitive one, but it turned out to be a bad mismatch with Lebedev easily beating Ramirez. Lebedev did not look like he had lost anything in his game at due to his advancing age. In fact, Lebedev looked as good as he did in stopping Maccarinelli in the 3rd round in their fight in 2009. There was no difference at all.

It’s hard to say if this fight is a 50-50 affair. Just based on experience, you can’t really call it a 50-50 fight going in like this. Gassiev does not have the fights on his resume to show that he can beat an accomplished champion like Lebedev. But you never know. Gassiev looked bad in the early going in his last two fights against Shimmell and Thomas. Those guys were hitting Gassiev at will with shots to the head until he finally nailed them with a big punch to end the fight. Gassiev didn’t get the victory in his fight against Thomas, because he hit him with a right hand after the bell. The fight was then ruled a 3rd round no contest.

That fight took place almost a year ago in December. In Gassiev’s last fight, he looked better in stopping Shimmell in the 1st round. Gassiev threw almost nothing until the final seconds of the 1st in which he then nailed Shimmell with a left hook that knocked him unconscious. Gassiev cannot give away rounds to a fighter like Lebedev though, because he hits too hard for him to be allowed to tee off on him the way that Shimmell and Thomas were able to. Gassiev has to hit Lebedev with something really hard early in the 1st round so that he doesn’t get too brave and start unloading on him.

“His experience will not give him a title, and my youth will not be a problem,” said Gassiev. “I worked for this chance for five years. The ring will give us the answer.”

Hopefully for Gassiev’s sake, he’s had good sparring to get him ready for this match. Perhaps the sparring will help make up for his lack of ring experience. 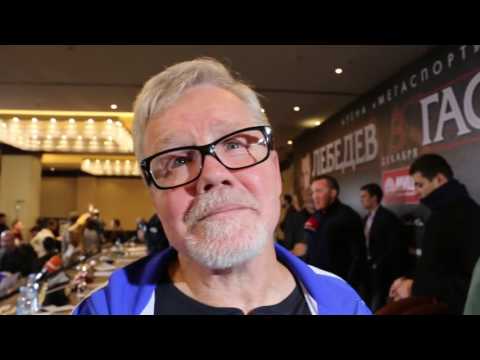 
« Haye-Bellew is an even fight says Coldwell