Roach wants Pacquiao to be a moving target for Spence, who doesn’t do as well against fighters that use their feet to avoid his big power shots.

Spence (27-0, 21 KOs) is a dangerous puncher with both hands, and Roach doesn’t want his fighter Pacquiao (62-7-2, 39 KOs) to give the younger, bigger Spence opportunities to land his shots.

Has Pacquiao discovered the Fountain of Youth?

Pacquiao, 42, will be challenging IBF/WBC welterweight champion Spence for his titles when they meet in the headliner in a little over two weeks from now on August 21st on FOX pay-per-view at the T-Mobile Arena in Las Vegas, Nevada.

Many boxing fans aren’t giving Pacquiao much of a chance to beat Spence because he’s too small, too old, and is too ring rusty to pull off the upset against ‘The Truth’ Spence, but you never know.

Maybe the Filipino star has stumbled upon the mythical Fountain of Youth waters to restore him back to the fighter he was in his 20s.

Pacquiao can’t stay in the pocket

“Manny will always make the final decision on the opponent, and he did, and I called him up and told him that he picked one of the best guys out there,” said Freddie Roach to TheRingDigital about Pacquiao selecting Spence.

“One thing about Manny, we’ve always talked about beating the best out there, and the thing is, we don’t just want to be a name or somebody out there.

“We want to be one of the best fighters in the world. That’s why we’re fighting this fight. Spence is a very good puncher, a tough guy but my guy can fight too.

“I’m just joking,” said Roach when asked to respond to a recent comment he made about Keith Thurman being better than Spence. “I don’t judge people that way. But he [Spence] is heavy-footed and he doesn’t have nearly Pacquiao’s quality movement.

“He [Spence] walks around the ring and follows you, and he can punch a little bit. He’s a dangerous puncher, but the thing is, if you don’t stay in the pocket, you make the fight a lot easier for yourself,” said Roach.

Pacquiao’s fighting style is so well-ingrained at this stage in his career, that’s impossible to imagine him changing it now at 42 to suddenly use movement.

It’s great that Roach is talking about how Pacquiao shouldn’t stand directly in front of Spence, but that’s how he’s always fought.

It’ll require a tremendous amount of mental discipline for Pacquiao to change his fighting style for the Spence clash, and then stick with the new defensive style for the entire 12 round fight.

Manny has had good sparring partners

“He [Spence] is [very tough], but the sparring partners [for Pacquiao] are very worthy people and very good fighters,” Roach continued.

“One kid is from Chicago, 18-0 and I forget his name, and Mr. Rocha, he’s done great work for us. He’s probably the number one sparring partner, and he’s very, very strong and he throws punches very hard.

“So Manny has been getting ready, and I think his best day of sparring was maybe yesterday. He did 10 rounds and we had two knockdowns in that session. I was very happy because it was exactly what we needed.

“There are some good names out there, but we’re going to take care of this one first,” said Roach when asked about Pacquiao taking on Terence Crawford next.

“He does what he does best, which is boxing, and he’s doing very good as a politician as a senator and so forth, and maybe someday he may be president,” said Roach about Pacquiao.

“I said to Manny, ‘Will the president ever defend his titles?’ He never talks about being a president to me, but it’s something he’s getting ready for because he is a senator,” said Roach.

Pacquiao looks like he’s in good shape for the fight. The only question is, will he be able to fight hard for a full 12 rounds on August 21st, particularly with Spence bearing down on him at all times.

In Pacquiao’s last fight two years ago against Keith Thurman in July 2019, he ran out of gas after the eighth round and struggled during the championship rounds.

Two years later, Pacquiao’s stamina might not have improved, and he’s facing a tougher opponent in 31-year-old Spence. If Pacquiao thought he had it tough against Thurman, wait and see what’s in store for him against Errol on August 21st. 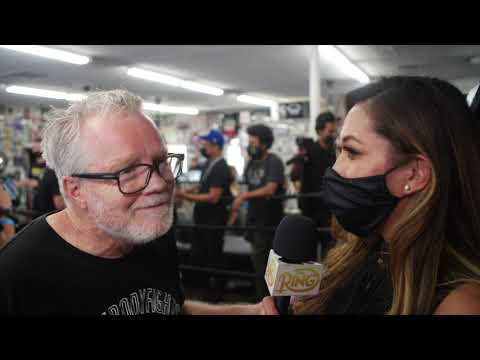 
« Hearn wants Canelo vs. Bivol to be announced, worried about cutoff for Sept.18th