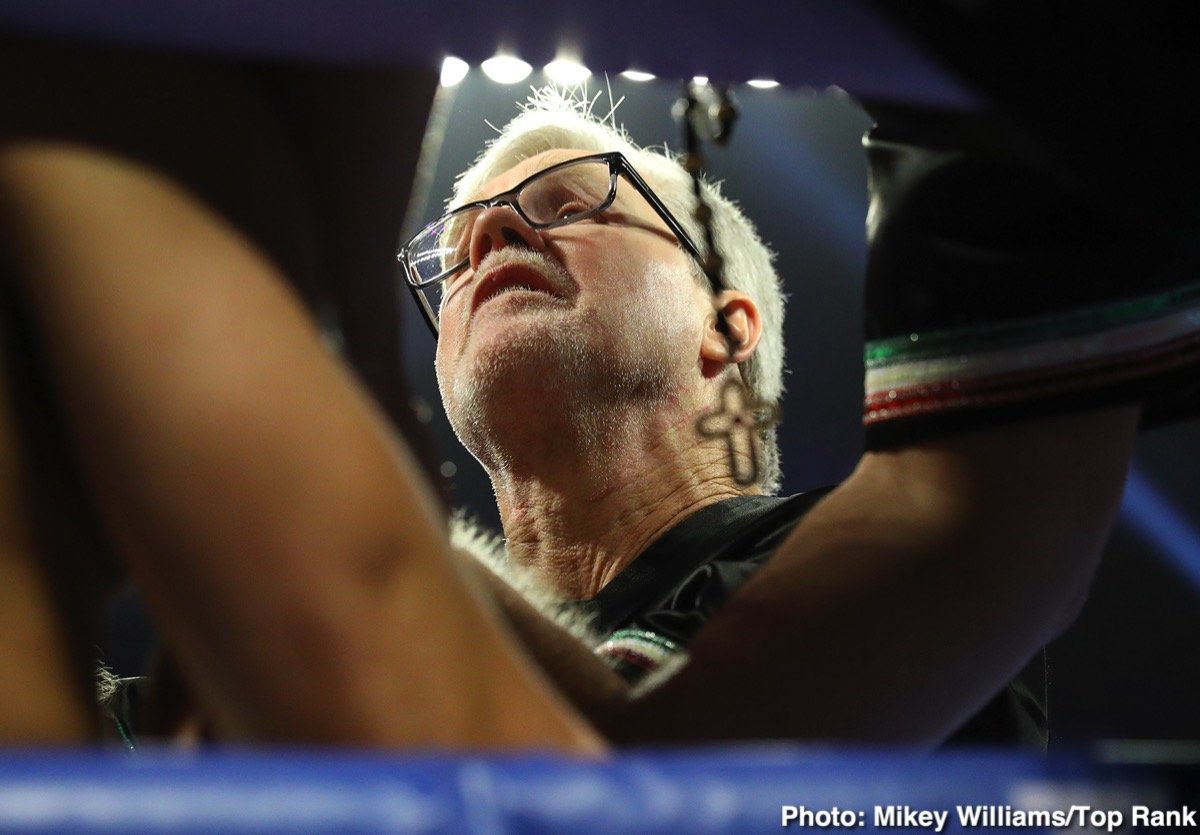 By Jeff Aronow: Trainer Freddie Roach reveals that he’s STILL offering Manny Pacquiao’s sparring partners $1000 if they can knock him down during their sparring sessions.

To this day, Roach states that he’s never had to give the $1000 because none of Pacquiao’s sparring partners have ever dropped him during their training.

Roach isn’t saying whether he gives the boot to sparring partners that attempt to take Pacquiao’s head off in training.

He also isn’t saying what type of sparring partners he’s been putting in there with Pacquiao over the years. It would make a BIG difference if Pacquiao were sparring with guys like Jaron Ennis, Vergil Ortiz Jr, or David Avanesyan rather than some unknown guy.

Pacquiao (62-7-2, 39 KOs) will need all the help he can get from his sparring partners to try and find the Fountain of Youth to defeat the unbeaten IBF/WBC welterweight champion Errol ‘The Truth’ Spence Jr on August 21st.

Roach isn’t going to admit it, but the 42-year-old Pacquiao is up against it in this fight, and he could potentially get knocked into retirement by Spence.

“Manny doesn’t know that. I’ve always kept it a secret, but for every sparring partner I hire, I say, ‘You knock him down, I give you a thousand bucks,” said Freddie Roach to The Sun about offering $1000 to sparring partners to try and knockdown Pacquiao.

“And I’ve kept a thousand in my pocket,” said Roach.

It’s certainly impressive that Pacquiao hasn’t been knocked down in sparring, but that’s not going to mean a whole lot if he gets taken apart by Spence on August 21. That’s what actually counts, not sparring.

Manny should be the underdog

“I thought Errol Spence’s last performance was very solid, typical of an Errol Spence performance. He broke Danny down, worked him hard. And he doesn’t take a lot of chances to try and finish, guys.

He pretty much won the fight eight to four on my scorecard. Danny had his moments, and I think if Danny had a little more desire and he really wanted to win, maybe he could have made it a little closer and maybe won. I think he was just going through the motions. Errol looked good.

“That’s why the numbers open so big because Errol has so many physical advantages, and he’s got the youth. But you see the numbers coming down because people have faith in the senator, people believe, and the senator is going to win on August 21st,” said Gibbons.

Pacquiao will need a miracle to win this fight because he’s facing a guy that is just too good right now in Spence. For a fighter that begun his career at the minimumweight, Pacquiao might be too small for him to defeat Errol.

A win for Pacquiao would be HUGE

“It would be the greatest win in welterweight history. 42-years-old and eight months, it doesn’t happen. It’s never happened in history.

“When you hit 37 and 38, a lot of these guys are finished, and even before then. It could be the senator’s last fight, and it could be his last fight in the U.S.

“There’s a lot of possible lasts, so this is definitely something you want to tune into. It’s once in a generation, once in a lifetime. You’ll never see this type of fighter again.

“So if you want to see him at his best, tune in on August 21st on FOX pay-per-view,” said Gibbons.


« Jack Cullen vs Avni Yildirim on July 31, live on DAZN