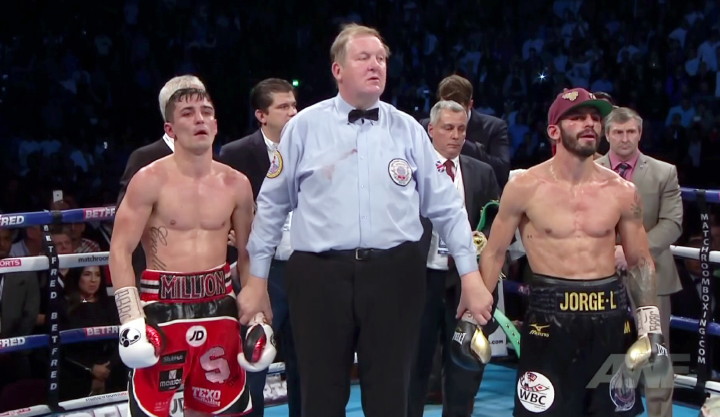 Crolla lost his World Boxing Association lightweight title in the fight. Fortunately for him, he had a rematch clause in the contract. Even without a rematch clause, Crolla would have an excellent chance of getting a rematch with Linares, because the Tokyo based fighter says he want to come back to fight in the UK, because he likes to fight there due to the large crowds and excitement.

So far, Linares is doing really well in fighting in England. He’s 2-0 after beating Crolla and Kevin Mitchell. It might take a better fighter than Crolla to beat Linares at this point. It’s always nice to have a rematch, but in Crolla’s case, he lacks the punching power to take advantage of Linares’ flaws in his game, which is namely his chin.

“There’s a rematch clause. It’s the biggest fight for Linares. I don’t envisage any problems,” Hearn said to BBC Sport. “Because Anthony put up such a good fight the 12 to 13,000 that were in the Manchester Arena will increase next time. A loss at the highest level is never the end of the world. You’re not going to win all these fights against great fighters.”

A rematch is probably Crolla’s best option right now. I think he stands a better chance of squeaking out a decision against the 31-year-old Linares than he would if he challenged the bigger, stronger and younger Terry Flanagan or facing IBF champion Robert Easter Jr. Dejan Zlaticanin would be a match match-up for Crolla as well, because he’s a big puncher who applies a lot of pressure on his opponents. I can’t see Crolla beating any of those guys. He might get lucky the second time around against Linares. I doubt it, but there’s a chance at least.

Crolla fought well in rounds three through five. I thought he was on his way to taking the fight, but the complexion of the match changed in the 6th after Linares hurt Crolla with a looping right hand to the head. Linares then flurried on Crolla in the remaining seconds of the round and had him in bad shape. If there was a little more time left in the round, I have no doubts that Linares would have knocked Crolla out. He was hurt and just taking shots while backed up against the ropes. Crolla did come back to fight well in the 7th round. However, I think that was the last bit of fuel that Crolla had in his gas tank, because he looked tired and worn out from the 8th round on. Linares took charge of the fight and out-boxed Crolla for the last four rounds to get the win. Linares’ speed, energy, movement and combination punching was the difference in the last part of the fight.

Crolla impressed me with his Gennady Golovkin style of fighting in the last half of the contest. He was stalking Linares constantly and not letting him have any space. The only thing that was missing from Crolla’s game was the punching power. If he had power in his shots, he would have had Linares in trouble. But it was pressure without power from Crolla, and that made it possible for Linares to win the fight based on his superior boxing skills.

“He rocked my world. I’m not going to lie. My head’s still spinning now. I’m in great condition and that’s what pulled me through it. It’s a pleasure to share the ring with a great like Linares,” said Crolla to Sky Sports News after the fight. “He’s the best fighter I’ve shared the ring with. I came so close to beaten him so it shows I belong at that level. A few mistakes can cost you dearly and that’s what happened tonight. I’m gutted. It was close.”

It was a close fight. I think it came down to Crolla getting hurt in the 6th, and not recovering the form that he had in the first half of the fight. Mostly, it looked like Crolla was tired in the second half, and not landing with the same authority that he had in rounds three through six. Before Linares hurt Crolla in round six, Crolla was winning the round and landing a lot of shots.

I think Crolla got a little carried away with the pressure that he put on Linares in the 6th, and he walked into a big right hand shot. It was a big enough punch to where Crolla looked badly stunned. Linares might have been able to finish Crolla off if he’d taken his time and landed a bigger shot to finish him. Instead, Linares threw a flurry of arm punches that lacked the power to finish Crolla. Linares threw a lot of fast punches with many of them missing. He got a little over anxious.

Klitschko to move forward with career after Fury cancellation »