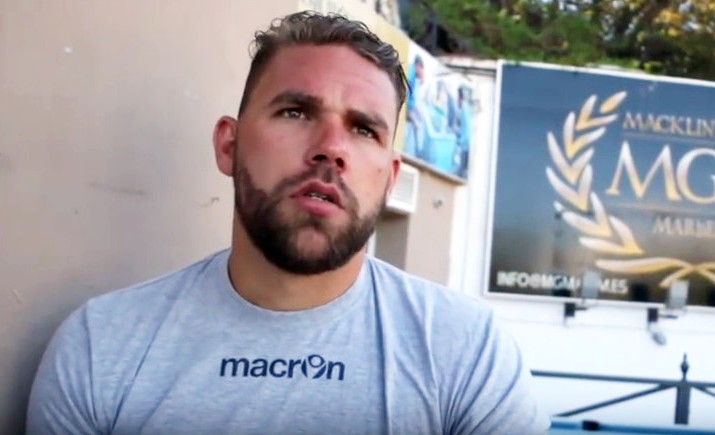 By Scott Gilfoid: Billy Joe Saunders and trainer Chris Eubank Sr. got into a little spat on social media today about this and that. Saunders pointed out that Eubank Sr. had got his son Chris Eubank Jr. a lot of money over the Gennady GGG Golovkin deal where he chose not to sign the contract for that fight. Eubank Sr. then intimated that he would let Saunders fight his son Eubank Jr. At this point, Saunders said the fight against Eubank Jr. can happen as long as he agrees to an 80-20 split of the loot for the fight.

It’s unclear if this was Saunders’ way of ducking the Eubank Jr rematch, but it would seem so. There’s no way Eubank Jr would accept such a low money split with the 26-year-old Saunders, who is seen by many in the boxing community as little more than a paper champion at best.

Here are the comments from Saunders and Eubank Sr on their Twitter exchange:

Eubank Sr – “Fans want 2 see CE Jr vs. You and then GG. Your Dad will be shamed if you give it up. That’s like giving up your balls.”

Saunders – “Chris Eubank, you know you cost your son a lot of cash from my fight and GGG and it’s hit home you messed up. I don’t think anyone will work with you.”

Eubank Sr – “Eubank Jr will no longer be charitable. This is why Billy Joe Saunders is likely to give up boxing for track & field #run.”

Eubank Sr – “So long as you keep your word and don’t prove the people calling you a coward right. You young man are good to go.”

Saunders has quite a record of losing out on big fights lately with him reportedly not agreeing to the offer from Gennady Golovkin, and then turning down a fight against Gabriel Rosado, Curtis Stevens and Willie Monroe Jr. for the Saul Canelo Alvarez vs. Liam Smith card on September 17 at the AT&T Stadium in Arlington, Texas.

By choosing not to fight Rosado, Stevens or Monroe Jr, Saunders may have blown his chance for a big money fight against Canelo for December. Talk about your blown chances. I think what we’re likely going to see is Saunders out-pricing himself for the Eubank Jr. rematch, and then having to fight some lower level fringe contender like Max Bursak in September or October in order to keep from getting stripped of his World Boxing Organization middleweight title.

Saunders (23-0, 12 KOs) still hasn’t defended his WBO title since beating Andy Lee last December to win the strap. If Saunders doesn’t defend the belt soon, he’s going to get stripped of his trap and end up in the same boat as Demetrius Andrade, who suffered a similar fate when he was stripped of his WBO 154lb title after not defending it for an entire year. Saunders needs to make up his mind what he wants to do with his 15 minutes of fame as the WBO strap holder. He kind of reminds me of a little kid in a candy store, who can’t make up his mind what he wants to buy. I think what we’re going to see from Saunders is him choosing a really disappointing opponent for his next fight. When he does have to eventually fight his No.1 contender, he’ll likely lose.

The No.1 guy in the WBO’s rankings at 160 right now is Avtandil Khurtsidze. I can definitely see Saunders losing to him, because that guy fights hard for 12 rounds, and Saunders typically gasses out after just six rounds. Khurtsidze is a pressure fighter, and Saunders struggles with those type of fighters because they force him to use energy and he runs down like an old cuckoo clock when he’s pressured in his fights. I’m just saying.

To me, it sure as heck sounds like Saunders is trying to negotiate his way out of the Eubank Jr. fight by offering him a money split that he would never hope to agree to. Why would he? An 80-20 split is ridiculous for Eubank Jr to accept. That’s just crazy.

Saunders beat Eubank Jr two years ago by a 12 round split decision in November 2014. You can argue the only reason why Eubank Jr lost the fight was because he kept playing around in the first half of the contest by posing after he’d throw a punch. I think he assumed he could do the same things against Saunders that he had done against the domestic level opposition he’d been fighting up to that point in his career.

Eubank Jr. didn’t realize that he had to start fighting hard until the 7th round. At that point, he appeared to sweep the last six rounds of the contest. I think Eubank Jr should have been given a draw, because he clearly dominated the last six rounds. I thought the scoring was pathetic.

Both Saunders and Eubank Jr. had their chances to fight Golovkin recently, and both of them reportedly opted not to take the fight. They both opted not to take the fight, which is unfortunate because they would have made a ton of money against Triple G. the guy that is facing Golovkin now, Brook, will be getting a career high payday against him next month on September 10. Yeah, Brook will obviously get knocked out by Golovkin, but the money will be nice. Brook could make upwards of $6.5 million for the Golovkin fight. That’s a lot of sweet spending cash. Saunders and Eubank Jr need to get with it so that they can get in on the Golovkin action while he’s still around and still red-hot in popularity. Once Golovkin loses or looks bad against someone, then I suspect the interest in him from the British boxing public will die off. That’s why it’s imperative that Saunders and Eubank Jr fight GGG while he’s still on top rather than when he’s on the slide.

I have a feeling that the Saunders vs. Eubank Jr. fight won’t happen anytime soon. I just cannot see these guys being able to negotiate a rematch, especially if Saunders demands an 80-20 split.


« Margarito unlikely to get Canelo fight