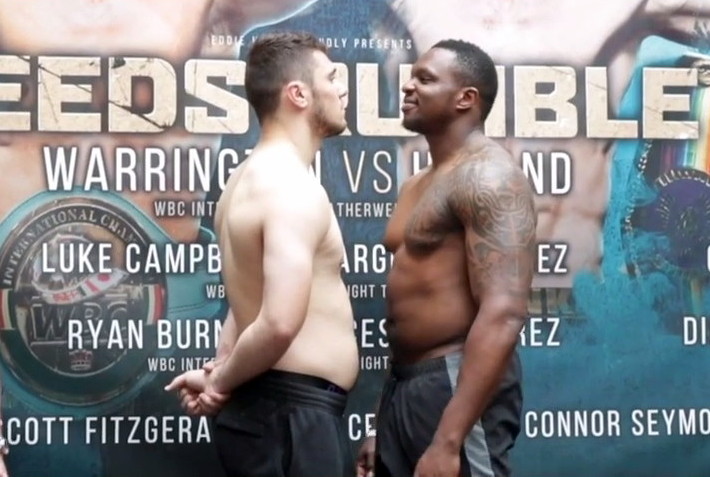 By Scott Gilfoid: Unbeaten #1 WBC, #5 IBF, #11 WBA featherweight contender Josh Warrington (23-0, 4 KOs) successfully weighed in on Friday for his fight against former world title challenger Patrick Hyland (31-2, 15 KOs) on Saturday night at the First Direct Arena in Leeds. The Warrington vs. Hyland fight is the main event, but I see it as a poor fight for a main event. I like the undercard fight between heavyweight Dillian Whyte and Dave Allen as the far better match-up. I think Whyte has potential champion some day. With Warrington, I don’t think he’ll ever win a world title. He’s too weak of a puncher, and there are too many quality fighters in the division that he fights in.

The 32-year-old Hyland failed to make weight at 128 ¼ pounds. It pretty much doesn’t because the fight isn’t for a world title or any kind of eliminator. If it were a title eliminator, I’d like to think that a better fighter than the non-ranked Hyland could be found to face Warrington. But then again, Warrington is arguably no better than a bottom 15 fringe contender in my opinion.

I just see Warrington as a guy with an inflated ranking based off of fluff wins. He’s also promoted by a popular promotional company in Matchroom Sport. I wonder if that helps.

This could be the 24-year-old Warrington’s final fight before he gets a title shot against one of the featherweight champions. I don’t expect Warrington to win against any of the champions, but he’ll get a nice little payday none the less.

If that turns out to be the only time that Warrington ever fights for a world title, then so be it. He’ll get his 15 minutes of fame as the opponent for one of the champions, and then see his career fizzle out quickly after that. 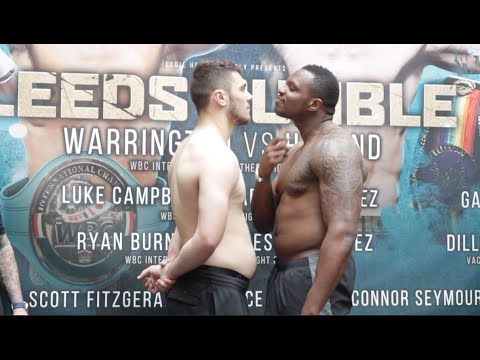 Heavyweights Dillian Whyte (17-1,14 KOs) and Dave Allen (9-0-1, 6 KOs) weighed in for their fight. Whyte came in at 245 ¼ pounds and looked a little less flabby than the 253 pounds he weighed in for his last fight a month ago against Ivica Bacurin on June 25. Honestly, I’m not really sure what Whyte’s best weight is because it’s been all over the place since he turned pro in 2011. We’ve seen Whyte as high as 253 and as low as 229. Only he knows what the best weight is for him.

Unbeaten bantamweight Ryan Burnett (13-0, 9 KOs) weighed in at 117 ¼ pounds for his fight against Mexican fighter Cesar Ramirez (12-2, 6 KOs). Ramirez, 28, also weighed in at 117 ¼ pounds. The fight is scheduled for 10 rounds. Burnett will be defending his WBC International bantamweight title. There are a lot of boxing fans that are high on Burnett, 24, hasn’t really ever beaten anyone that you can call a good fighter. His best wins are against the 38-year-old Jason Booth and Anthony Settoul. This is the same Settoul that was stopped in two rounds by Nonito Donaire last year in July 2015. It’s not exactly inspiring that Burnett had to go the full 10 rounds to beat Settoul. However, Burnett did drop Settoul in the 5th.