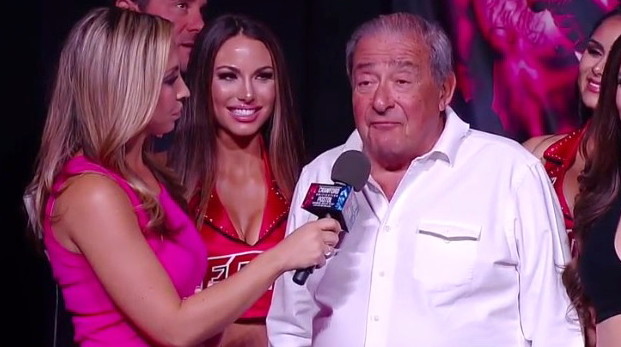 By Jeff Aranow: Top Rank promoter Bob Arum says he’ll be discussing later the fight between WBC/WBO light welterweight champion Terence Crawford and Manny Pacquiao. Arum wants to make that fight a reality, and he reportedly has already discussed it with Manny and he’s on board with it. Crawford needed to get a win last Saturday night over Viktor Postol to put him in the Pacquiao fight, and he did his part in defeating the Ukrainian fighter by a 12 round unanimous decision on HBO pay-per-view at the MGM Grand in Las Vegas, Nevada.

It wasn’t the most thrilling fight to watch from a fan’s perspective, but Crawford did win. It didn’t matter if he looked good or not. All Crawford had to do was win the fight in order to get the Pacquiao fight, and he did that. Arum wants the Pacquiao-Crawford fight because he promotes both guys.

Arum could obviously match Pacquiao up against more popular fighters like Keith Thurman and Danny Garcia, but he doesn’t promote those fighters, so it wouldn’t help his Top Rank company nearly as much as it would for him to keep it in house.

“This is a night to celebrate what we just saw Terence Crawford do. We can talk about that possibility later,” said Arum to nj.com.

Arum has been eager to make the Pacquiao vs. Crawford fight since earlier this year. Arum gave Pacquiao the option of fighting Crawford, Amir Khan and Tim Bradley for his last fight in April. Pacquiao picked Bradley, and the fight did poorly on pay-per-view. Even if Pacquiao had selected Crawford, it likely would have done poor PPV numbers.

Crawford fought like Guillermo Rigondeaux in fighting defensively for 12 rounds. For the boxing fans that enjoy watching a defensive style of fighting, they loved what they saw in Crawford last Saturday. Crawford wasn’t going to throw punches to initiate the action most of the time. He was more content at waiting, making Postol miss, and then countering him with a single punch. It was hard time watch at times. It was like watching a slow movie with a lot of boring parts in between brief periods of action.

Arum might be better off matching Pacquiao against Jessie Vargas first and then Crawford later on. Vargas looked good in his last fight against Sadam Ali. If Arum gave Crawford another chance to fight in a more exciting style against someone like Ruslan Provodnikov, it would help build the Pacquiao fight.

The only problem with that is it’s unknown if Pacquiao will stick around long enough for Arum to wait on the Pacquiao-Crawford fight. He probably needs to make the fight happen now for November 5 otherwise he might lose this golden opportunity. This is all about the passing of the torch from Pacquiao to Crawford. I’m not sure if Crawford is the right kind of fighter for Arum to be banking on to turn him into a star.

Crawford is more like Rigondeaux than he is a thrilling to watch fighter like Floyd Mayweather Jr. or Pacquiao. However, Crawford has proven that he’s the best at 140. For him to become a big star, Crawford will need to move up to 147 and beat the top welterweights.

I don’t know if that’s possible. Crawford can move up, but he might be stuck by not being able to get fights against Al Haymon fighters like Errol Spence Jr, Keith Thurman, Danny Garcia, Amir Khan and Shawn Porter. In fact, that’s probably the fate of Crawford. He’ll likely wind up as a fringe guy in holding down the WBO belt like Tim Bradley was doing, and stuck fighting guys like Vargas and the WBO’s contenders for the remainder of his career rather than fighting the top fighters at 147.

I have a feeling that the Pacquiao vs. Crawford fight is going to work out for Arum about as good as the Nonito Donaire vs. Rigondeaux fight did. Donaire was a popular fighter for Arum, but he was easily beaten by Rigondeaux. Since then, we’ve seen Donaire mostly fighting overseas outside of the U.S and his career hasn’t looked the same. If Pacquiao beats Crawford, it would leave Arum with a potentially tainted Crawford and he would need to look in another direction for a replacement for Pacquiao as the new PPV star for Top Rank.