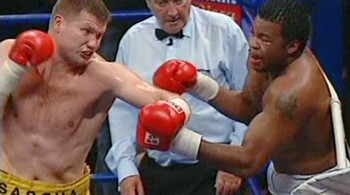 By Scott Bells: I had read a couple articles today suggesting that heavyweight Shannon Briggs would be taking on B-level fighter Alexander Dimitrenko on the undercard of David Haye’s next show. If Briggs and Haye both win, they will face each other next.

Clearly this is a great fight for Briggs and one that will show people whether he should even be in the ring with Haye. After the beating he took off Vitali Klitschko a 6 years ago, from a health point of view, I certainly don’t want to see him in with a big puncher like Haye if he is likely to suffer a similar fate.

Unfortunately, the terrible opposition he has faced since has told us nothing about his ability to take a punch.

I did read an article questioning why Briggs should have to fight a semi-decent level of opponent to get the Haye fight…..this sort of logic is completely understandable for people who truly don’t understand both the sport of boxing and economics that go with it. I will try to spell it out so that any writers or readers who have the same question can get it.

David Haye brings lots of money in from UK-based revenue as he is a star there. Shannon Briggs wants a pay day fight and knows that him versus Haye would provide that. Briggs can sell a fight but does not bring in big money on his own…..whether you are a Haye fan or not (same with Anthony Joshua and Deontay Wilder), they bring in good money. Briggs therefore needs to do whatever Haye asks of him if he is guaranteed that future fight.

Now…..sometimes, the economics and the person who holds the power in these situations does not seem fair; sometimes it is not the best skilled fighter who has the power – it is the one who holds the revenue streams. Look at poor Luis Ortiz; he is clearly one of the best 5 heavyweights on current form but no one in their right mind will fight him as he is too high risk (because he is too highly skilled) and too little reward financially. Basically, it is not worth losing to someone who is not bringing extra revenue to the table. Golden Boy would have to pay some serious serious money to any of the champions to fight Oritz, so they are quite rightly trying to work him into a mandatory position – the issue for Ortiz is his age and so he wants the big fight sooner rather than later as he is up there at 37.

Now….back to Shannon Briggs! I am a big fan of him as a self-promoter and he clearly keeps in shape, but that alone does not allow you to walk into a big fight. I like Dimitrenko as an opponent as that is at least a semi-solid test and,quite frankly, if Briggs can’t beat a B level fighter like him, then he should not be in the ring with a quality fighter like Haye.
Obviously Haye’s opponent is a little unknown, but one that everyone would be shocked if Haye lost. Haye, whether you like him or hate him, is a clever businessman and has very carefully selected opponents in his comeback – I would have very much enjoyed Haye – Jennings or Haye-Stiverne more but, after 3 1/2 years out, nobody with half a brain would expect any fighter to go straight back in at the top (unless you’re Floyd Mayweather).

It is important for any writer and reader to seriously consider a boxer’s health in these situations…..Shannon Briggs is 44, and has been hit far more in his career than a Bernard Hopkins type and so he must fight a semi-decent opponent in this fight both from a credibility point of view, as well as risk assessment point of view. If Shannon the Cannon could pull in the huge money then he wouldn’t be in this dilemma, but he and his team know that, after hunting Klitschko and hunting Haye for the last couple years, that one last pay day is within reach if he can just prove himself.

Boxing is unfortunately a sport where money dominates, and it will for years to come. But never lose sight of the safety aspect; as shown in the recent Nick Blackwell incident in the UK, every boxer that steps through the ropes at whatever level is risking their lives in some way.

Hopefully, all writers can have that perspective, especially when talking about older fighters.


« Biosse steps up to replace injured Camacho May 13th