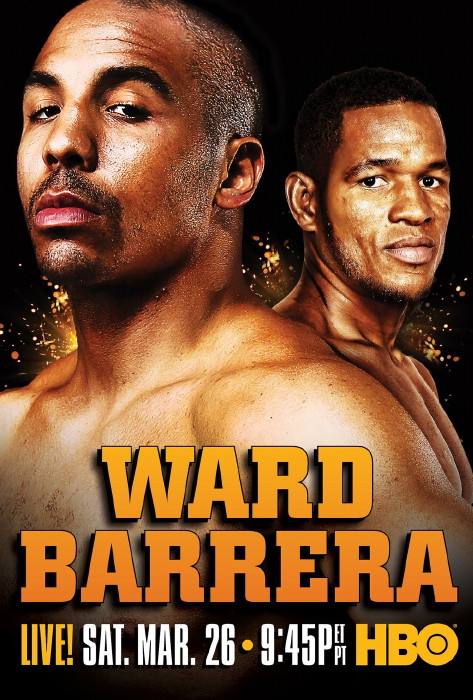 By Dan Ambrose: Undefeated #1 IBF light heavyweight contender Sullivan Barrera (17-0, 12 KOs) plans on making it a war in his fight against 31-year-old Andre Ward (28-0, 15 KOs) this month on March 26th on HBO Boxing from the Oracle Arena in Oakland, California.

Barrera believes that his punching power is going to be the major factor in him beating Ward. He sees Ward as a fighter whose inactivity in recent years is going to hurt him in this fight, because he plans on taking the fight to him from the first round. Barrera says he’s going to hit Ward everywhere to wear him down and then take him out.

Barrera wants to be the one that challenged IBF/WBA/WBO light heavyweight champion Sergey “Krusher” Kovalev for his titles later on this year. The only way that Barrera can be the one that faces Kovalev is by beating Ward. A loss to Ward will mean that Barrera will need to get back in line to work his way back to a number one spot again.

That’s something that would take Barrera a long time to do though. Kovalev isn’t going to just pick Barrera as an opponent for a voluntary defense because he’s too dangerous and too talented.

“I’m going to prepare so that Andre Ward has the fight of his life,” Barrera said to Michelle Phelps. “I can guarantee the fans it’s going to be a great war. All these predictions motivate me to do what I’ve got to do. I don’t think Andre Ward is going to be the one that keeps me from fighting Sergey Kovalev. I think my power is superior to Andre’s. I’m going to punch at him. I’m going to wear him down. I’m going to try to hit him everywhere, and I think by the later parts of the fight, I’ll wear him out enough to be able to knock him out. Yes, I believe the inactivity is going to be the difference because in a boxer’s life inactivity is something that is very harmful to a fighter’s career, and I think Andre Ward will feel that. Once he feels that, I’ll be able to do what I do. On March 26, Sullivan Barrera is ready for war,” said Barrera.

Ward is going to have a lot of problems with Barrera’s punching power in this fight, because he’s going to need to be able to trade shots with him in order to have a chance of winning. Barrera is clearly the harder puncher of the two, and that means that Ward is going to need to keep from getting hit as much as possible. That’s not going to be easy to do because Barrera’s trainer is Abel Sanchez, the same trainer that IBF/IBO/WBA middleweight champion Gennady “GGG” Golovkin is trained by. Sanchez has taught the Cuban Barrera how to cut off the ring on his opponents and force them to fight.

Golovkin has also taught Barrera a lot of useful tactics that he’ll surely be using against Ward on March 26. What this means is that it’s going to be necessary for Ward to try and outwork Barrera if he wants to win the fight, because he’s probably not going to be able to move enough to avoid him, and he won’t be able to grapple with him to keep him from getting his shots off. We saw Ward do a lot of wrestling in the Super Six tournament to keep his opponents from throwing punches. It worked for Ward because he was stronger than his opponents and/or a better grappler. Carl Froch and Arthur Abraham were stronger than Ward, but they didn’t have the ability to grapple with him on the inside. Ward was the more experienced grappler. 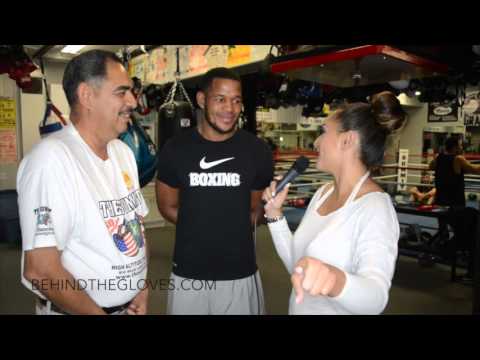 “He understands at 34-years-old, this is a very important step for his career,” said Sanchez. “We hope to upset the applecart on the 26th, and then be considered one of these guys they’re talking about. I believe it’s a fight where a star can be born or a star reinstated. We’re going to give Andre Ward a fight that nobody has given him,” said Sanchez.

Barrera stands in the way of the Ward vs. Kovalev fight from taking place. That’s a fight that is supposed to be taking place on HBO on November 19th. However, if Barrera defeats Ward, then HBO will need to make a big decision with what to do. They’ll still have Ward on the hook for two more fights in his three-fight contract with them. The question is will HBO still go ahead and match the beaten Ward with Kovalev as previously planned, or do they let the lesser known Barrera take the fight with Kovalev instead.

If HBO goes with that plan, then Ward would need to find two more opponents that are good enough for HBO to agree on for his final two fights of his contract with them. I wouldn’t be surprised if HBO goes ahead with the Kovalev vs. Ward fight any way regardless of the fact that Ward was beaten by Barrera. HBO has paid Ward a lot of money with his three-fight contract, and the only way they’re going to be able to get value for their money is if they match him against quality guys like Kovalev.