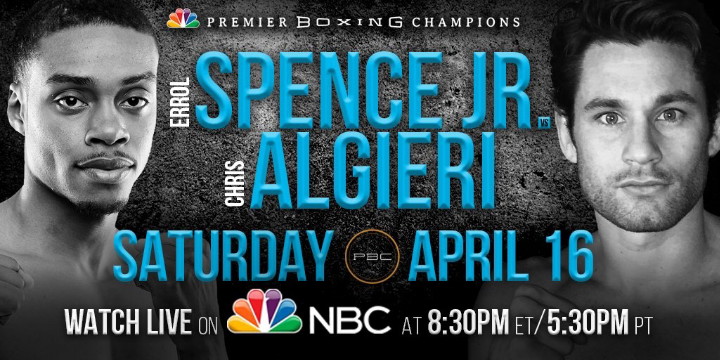 Analyst and former world champion Paulie Malignaggi sees this as a good test for the 26-year-old Spence Jr., because it will give him the chance to show what he’s made of by facing a rugged fighter like Algieri. This isn’t the same Algieri that beat Ruslan Provodnikov in 2014, and lost to Manny Pacquiao, says Malignaggi.

Algieri has changed his fighting style with the help of new trainer John David Jackson, and become a much different fighter than the one that existed before. Algieri used to be knowing for boxing his opponents to beat them. He would hit you and then move away before you could hit him back. But now Algieri tends to come after his opponents like a pure slugger looking to score knockouts. Malignaggi sees this as a really good test for Spence to show what he’s made of.

“It’s a good fight. It’s a good step up for Spence,” Malignaggi said to Fighthype.com. “He’s the blue chip prospect for this fight. We already know he’s got the skills. When you step up, your character gets exposed. Now you run into some road blocks where you’ve got to dig deep a couple of times. Chris is just the right opponent for that to show what Spence has. I’m not to say he’s a quitter or anything, but you need to go through these type of fights to build your character to check you. You find out things about yourself that you didn’t know something.”

The 5’10” Algieri is a good fighter with height similar to the 5′ 9½″ Spence. However, the difference in the fight will be the punching power of Spence. He’s a huge puncher in the Julian Jackson mold. Algieri crumbled under the punching power from the smaller 5’6 ½” Manny Pacquiao in their fight in November 2014. 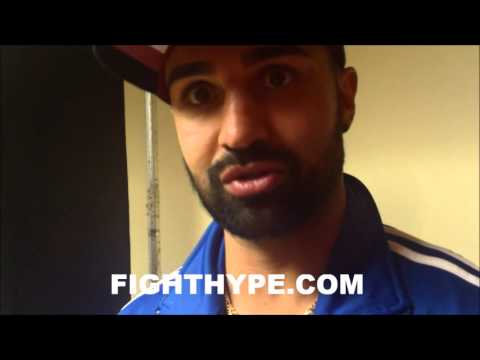 Algieri cannot let an even bigger puncher like Spence hit him all night long like in the Pacquiao fight. Algieri was down six times in the fight. If Spence puts Algieri down on the canvas, then the chances are pretty good that he’ll be able to finish him off if he gets up from the knockdown.

“I think Algieri is that kid of opponent. Algieri is a rugged dude, a strong fighter,” said Malignaggi. “He’s a good body puncher, as is Spence. I think it’s a good fight, and a long time coming for Spence. He’s got this kind of fight on the national stage. He gets as solid world ranked opponent. Algieri is getting better and better with John David Jackson. That’s not the guy that beat [Ruslan] Provodnikov, and that’s not the guy that fought Manny Pacquiao. That’s a much more different fighter, and with a much more rugged approach. He’s become more of a rugged dude with belief that he can get in the mud and get dirty if he has to, and his belief in his body punching. I think he’s improving. Spence is obviously the blue chip prospect, so I think that makes it a good fight. Yes, you’ve got to favor Spence, but Algieri’s at home and you don’t want to lose in front of the home crowd. It’s a good fight,” said Malignaggi.

Algieri is definitely more aggressive now with his new fighting style. However, he’s not really punching with any additional power than he was before. The change of style with Algieri is one of mindset and not one of any newfound punching power. If Algieri is going to fight like that against Spence, it could make his job much easier because he won’t need to chase Algieri down for 12 rounds in order to beat him.

If Spence can beat Algieri, he’ll be the IBF mandatory challenger and will be facing IBF 147lb champion Kell Brook at some point.

The Spence-Algieri fight card has two interesting fights on the undercard. WBO cruiserweight champion Krzysztof Glowacki defends his WBO title for the first time against Steve Cunningham in a 12 round fight. Glowacki defeated Marco Huck last year to capture the WBO title. Also on the card is unbeaten light heavyweight contender Marcus Browne facing Radivoje Kalajdzic in a 10 round fight.