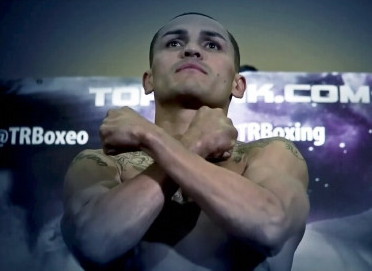 By Dan Ambrose: 35-year-old former WBO light welterweight champion Mike Alvarado (34-4, 23 KOs) will be returning to the ring after a long 14-month layoff to face little known Saul Corral (19-6, 10 KOs) in a scheduled eight round fight at the Arena Theater in Houston, Texas.

The fight card will be televised on Solo Boxeo Tecate” telecast (UniMas. The start time of the telecast is 11:00 p.m. ET/PT.

Alvarado hasn’t fought since being stopped in three rounds by Brandon Rios in January 2015, and he’s lost his last three fights dating back to 2013. The last time Alvarado won a fight was in March 2013, when he beat Rios by a 12 round unanimous decision.

That was exactly three years ago. That’s a long time for a fighter to go between victories, and it suggests that Alvarado will not be able to turn his career around no matter how hard he tries.

In the main event on the Alvarado vs. Corral card will be former lightweight champion Juan Diaz (40-4, 19 KOs) in a fight against Fernando Garcia (30-7-2, 18 KOs). Diaz, 32, hasn’t fought in almost two years. He’s been out of the ring due to a rotator cuff injury to his shoulder. It’s taken Diaz longer than Manny Pacquiao, who had a similar injury to his right shoulder. Diaz is from Houston, so this is going to be a large crowd of his fans looking to see him. Alvarado is from Denver, Colorado.

Alvarado looked really poor in his third round stoppage loss to Rios last year in 2015. Alvarado looked out of shape, unmotivated and just lost in the ring against an in shape and well prepared Rios. it was sad to see Alvarado being booed by his own fans, who had paid to see him fight and were expecting more from him obviously.

“I’m motivated. I have been training for a long time,” Alvarado said to ESPN.com.

Even with motivation, it’s going to be very hard for Alvarado to get back to where he once was in the sport. He’s older now, and has been struggling for too long of a time. Alvarado has had problems in the ring since 2013, and even before that in 2012. He just hasn’t looked good. In looking at how poor Alvarado was in his losses to Rios, Juan Manuel Marquez and Ruslan Provodnikov in 2013, it’s hard to believe that he was a top fighter at one point in his career.

Alvarado has going downhill for the last four years. He did have a wins over Rios in 2013 and Mauricio Herrera in 2012, but that was a long time ago. In 2011, Alvarado came from behind to stop Breidis Prescott in the 10th and final round of the fight. Alvarado would have lost the fight if he hadn’t scored a knockout. It was still a very punishing fight for Alvarado, as he took a lot of punishment in that fight.

“I’m happy and thankful for the opportunity to showcase my abilities once again and for the opportunity of fighting again,” Alvarado said. “I’m ready to show why (Top Rank) brought me back. My goal is to return to the same place I was before. I want to fight with top level fighters”

The good thing that Alvarado has going for him is he’s still with Top Rank. This means that he could potentially be put in with some of Top Rank boss Bob Arum’s fighters Terence Crawford, Jessie Vargas or even Rios. It’s hard to picture Alvarado getting a world title shot against WBO 147lb champion Jessie Vargas, but anything possible.

Arum has a good relationship with the World Boxing Organization, and it wouldn’t be surprising to see Alvarado given a top 15 ranking with the WBO if he beats Corral tonight. From there, we’d probably see Alvarado getting a world title shot against Vargas by the end of the year despite the fact that Alvarado would have only won one fight in the past three years. Stranger things have happened.

« Theophane: Broner will get worried when I’m still there in round 5

When a tragedy occurs inside the ring, who is responsible? »