Khan says he has multiple game plans for Canelo fight 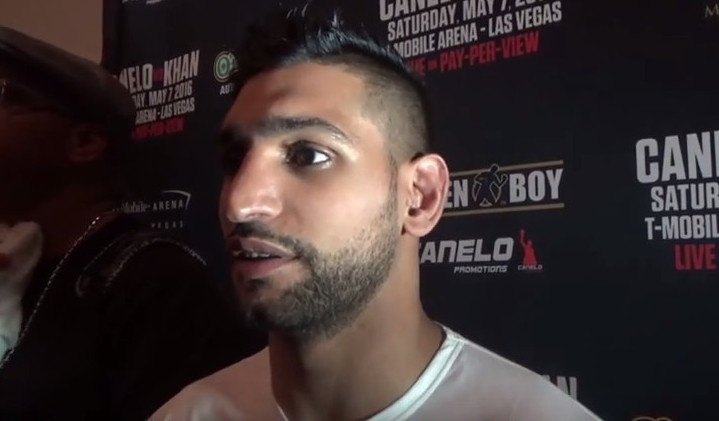 By Scott Gilfoid: Amir Khan (31-3, 19 KOs) says he’s coming into this fight against Saul “Canelo” Alvarez (46-1-1, 32 KOs) with multiple game plans for their fight on May 7th, because he knows that one plan might not work for him against the younger, stronger and likely much heavier Mexican fighter.

Khan doesn’t have a lot of choices to fall back on, however, if he’s unable to box against Canelo. He’s not going to be able to stand in the pocket against the 25-year-old Canelo, because he doesn’t have the chin or the punching power to fight in that manner. If you take a look at Canelo’s recent fight against Chris Algieri last year, Khan’s power shots were too weak to fend him off.

Algieri was the bigger puncher of the two and was able to walk Khan down all night long. It was surprising to see Algieri as the better puncher of the two, as he’s not known as a hard hitter by any stretch of the imagination. The fact of the matter is Khan didn’t bring his punching power up with him when he moved up from the light welterweight division in 2011. Khan is still punching like a 140lber.

Khan started his career out as a lightweight, and he didn’t add much power to his game when he moved up to 140. Not long after, Khan moved to 147, and the power just didn’t come up with him, I hate to say.

“Once I beat him [Canelo], I don’t want any excuses,” Khan said to Fighthype. “It’s going to be about picking the right things to do in the fight, making the right move, and we’re working on that as we speak. I think he’s more experienced than he was then. I think he’s a better fighter than he was then. So I think I’m facing a Canelo that’s more dangerous. I think he has a better game plan and knows himself even better. We’re going to do different styles. Game plan 1, 2 and 3 might work in this fight. We’re going to have different game plans because we just don’t know what’s going to work for me and what’s not going to work for me. As the fight goes on, we might have to change things up. When I go in the corner, Virgil will see some things and say I want to do this instead of that. So we’re going to have to keep on changing,” said Khan.

Let’s be real about this; Khan pretty much only has a plan-A, and that’s to box. If that fails to work, it’s not as if Khan is going to be able to switch to a plan-B and start slugging it out with the stronger Canelo. Khan doesn’t have the punching power or the chin to stand in the pocket against Canelo. It’ll be over quickly if Khan stops in his tracks and decides to trade shots.

Khan’s trainer Virgil Hunter is probably going to have him focus on using movement, jabbing and a lot of clinches to get the better of Canelo. If Virgil tells Khan to throw quick combinations, then he’s going to get blasted out almost immediately. Heck, even Floyd Mayweather Jr. realized that he couldn’t throw combinations against Canelo when he fought him in 2013. 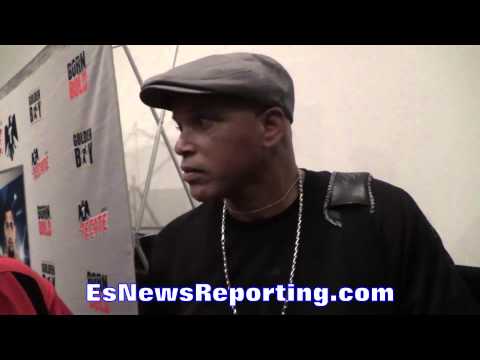 If you look at a replay of that fight on Youtube, you can see Mayweather throwing only single shot pot shots in every round. Mayweather was mostly just jabbing and leaning backwards while throwing. Mayweather was smart to keep the action in the center of the ring, and back away when Canelo would come forward. Mayweather would back up for a step or two, and then move either left or right. He didn’t just back up like some foolish fighters do. He was smart to move laterally after he backed up a foot or two, and he never moved latterly in the same direction. Mayweather made it so Canelo couldn’t predict what he would do. Khan is so easy to hit though, and he’s predictable in his escape rounds.

Khan likes to back straight up. I saw him doing that against Algieri repeatedly. Canelo may not be a very good fighter compared to the quality guys like Gennady Golovkin, but he’s smart enough to know how to get to a predictable guy like Khan.

De La Hoya: Golovkin is not a star like Canelo »