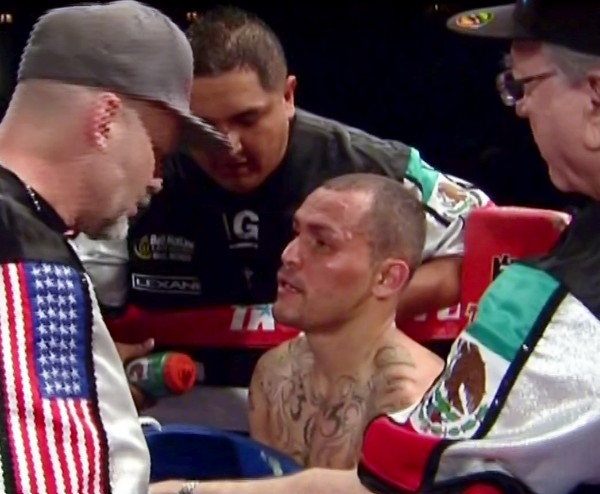 By Jim Dower: 32-year-old former lightweight champion Juan Diaz (41-4, 20 KOs) battered an over-matched but game Fernando Garcia (30-8-2, 19 KOs) for eight rounds until finally stopping him in the 9th round on Saturday night in a fight held at light welterweight at the Arena Theatre in Houston, Texas. This was far from an easy fight for Diaz, as he took a lot of head shots from Garcia at close range. Diaz had to basically tough it out against the journeyman Garcia. The fact that Diaz struggled to defeat Garcia suggests that he’s going to have problems later one when/if he faces a contender in the lightweight division.

Diaz knocked Garcia down in the 9th round with a storm of shots to the head and body. After Garcia got back up, Diaz unloaded on him until referee Laurence Cole pulled the plug on the fight in halting it at 2:24 of the round.

Diaz landed a lot of shots in the fight, but either lacked the power or Garcia had a great chin. It looked a little of both. Diaz’s power wasn’t devastating compared to some of the lightweights in the division. He had to hit Garcia with everything but the kitchen sink but it didn’t do much to him.

In fairness to Diaz, this was his first fight since 2014. Diaz has been out of action with a rotator cuff injury.

If Diaz is going to do something with the time left in his career, then he’s going to need to stay healthy. He can’t afford to get injured again and miss over a year. Diaz needs to fight on a frequent basis, preferably against better opposition than what we’ve been seeing from him in his comeback.

Diaz was considered the best lightweight in the division from 2003 to 2007. His career slowly unraveled after he lost to Nate Campbell in 2008. Two losses to Juan Manuel Marquez and a loss to Paulie Malignaggi soon followed. Diaz stopped fighting after his second loss to Marquez in 2010. Diaz didn’t return to the ring until 2013. He’s been fighting ever since.

In the co-feature bout, former WBO 140lb champion Mike Alvarado (35-4, 24 KOs) defeated Saul Corral (19-7, 10 KOs) by an easy 3rd round knockout. Alvarado hit Corral at will with big power shots until dropping him with a right hand to the head in the 3rd. The fight was stopped at 1:25 of the round. This was the 35-yesr-old Alvarado’s first fight since being blown out by Brandon Rios in early 2015. Alvarado suffered a bloody nose, and was hit a lot in the fight. Alvarado looked very slow and was fortunate that he was fighting a weak opponent with no punching power.

Alvarado showed good punching power. If he can keep winning like this, it’s likely that his promoters at Top Rank will put him in with the likes of WBO welterweight champion Jessie Vargas and/or Terence Crawford if he moves up in weight. If Brandon Rios makes a comeback, then he would be a possibility as well for Alvarado. It would be the fourth time they’ve fought. Rios holds the lead in the series 2-1.