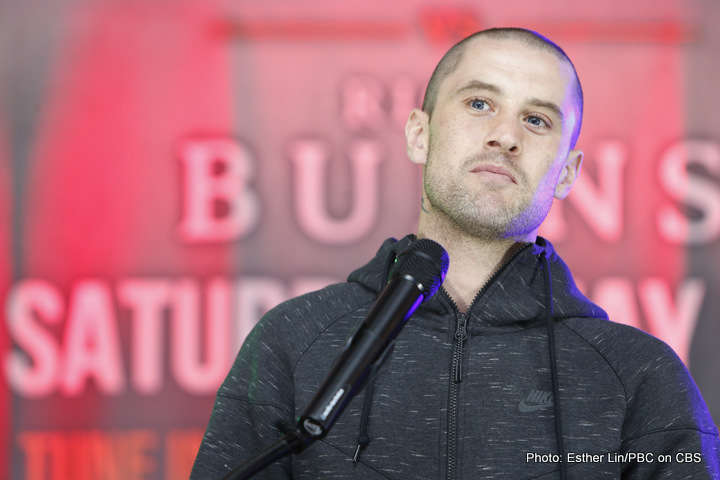 By Scott Gilfoid: Despite having lost the last time he fought at 140 in 2015, former two division world champion Ricky Burns (39-5-1, 13 KOs) will be given the chance to fight for the vacant WBA World light welterweight title on May 28 against #2 WBA Michele Di Rocco (40-1-1, 18 KOs) in Burns’ home city of Glasow, Scotland.

The fight will be taking place at the SSE Hydro. This is one of those fights that makes you shake your head and realize how far the sport of boxing needs to go before it’s up there with the other sports. What is disappointing about the Burns-Di Rocco fight, besides Di Rocco having a resume barren of well-known opposition, is the fact that the soon to be 33-year-old Burns isn’t even ranked in the top 15 at 140.

In other words, Burns is being vaulted ahead of the hard-working top 15 contenders in the light welterweight division. I do not see why Burns is being given the title shot when there are a number of talents that deserve a shot at the WBA title.

The Burns vs. Di Rocco fight will be televised on Sky Sports on May 28. Some boxing fans feel that Burns has seen better days, and that he’s a shot fighter. However, even if Burns is functioning at 75 percent of what he previously was, I think he’s going to do a number on Di Rocco.

Burns is already looking past Di Rocco towards other fights he’s interested in at 140. I can’t blame him. Di Rocco is not someone that he really has to worry about beating. However, I don’t know that there are a lot of big fights in the 140lb division for Burns. Unless he plans on finally fighting Adrien Broner, which I doubt, I don’t see much out there for Burns. It’s not as if he can fight Terence Crawford again. Their previous fight was so one-sided that I can’t imagine anyone wanting to see the two of them face each other again in this lifetime.

“There are massive fights for me at Lightweight and Super-Lightweight – I’ve spoken to my trainer Tony Sims and we feel I can compete competitively at either weight class and this fight will lead on to great things for me,” said Burns.

If Burns can lure one of the welterweight champions into fighting him like Kell Brook, then yeah, I could see that as a “massive” fight. But other than him, Burns doesn’t have massive fights in the 140lb division. The division is barren of big names once you get past Broner. I don’t consider Crawford a big name, at least not outside of his hometown of Omaha, Nebraska. The top dogs are 140 are Viktor Postol, Broner and Crawford.

Burns has recently turned his career around with wins over Josh King and Prince Ofotsu. Before those wins, Burns had lost to Omar Figueroa Jr., Terence Crawford and Dejan Zlaticanin. Burns did beat Lepelley after his loss to Zlaticanin.

Burns also had a controversial draw against Raymundo Beltran in 2013, before his back to back losses to Crawford and Zlaticanin. Many boxing fans feel that Burns lost to Beltran, or should have lost. The fight took place in Glascow, and Burns appeared to win only two rounds in my view. He was doing little more than holding from the 2nd round on, and taking big left hooks to the head. That in my view is the worst decision I’ve ever seen in the sport. I’ve seen controversial decisions many times, but that one takes the whole cake.

This is a mismatch as far as I’m concerned. Di Rocco looks very, very basic, and he doesn’t have any punching power to speak of. I’m just wondering how Di Rocco has been able to go through a 12-year pro career with the best opponent he’s faced is arguably a fighter named Alexandre Lepelley. I think that’s so, so sad. To say that Di Rocco’s record is padded is putting it mildly. It’s completely padded.

If you take away all the fluff opposition on Di Rocco’s resume, you wind up with a record of 0-1-1. Is this the kind of record you want to see from someone fighting for a world title? Nope. I want to see talented fighters with records filled with contenders, not fighters with fluff resumes.

« Paul Williams Returns To Boxing As A Trainer