Luis Ortiz vs. Tony Thompson on March 5 on HBO 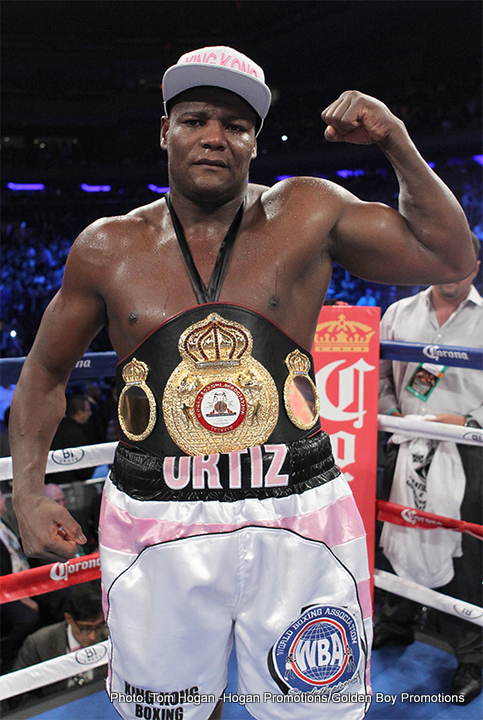 LOS ANGELES (Feb. 8, 2016) – Fresh from a stunning knockout of Bryant “By-By” Jennings and eager to continue his quest to be the best heavyweight in the sport, WBA Interim Heavyweight World Champion Luis “The Real King Kong” Ortiz (24-0, 21 KOs) will make his first title defense of 2016 when he faces former world title challenger Tony “The Tiger” Thompson (40-6, 27 KOs) in 12-round main event at the DC Armory, in Washington D.C.on Saturday, March 5 and televised live on HBO Boxing After Dark®beginning at 10:00 p.m. ET/PT.

“This fight is just another stepping stone on my path to becoming the unified heavyweight world champion,” said Luis Ortiz. “I came to the United States to chase my American Dream and fighting at the nation’s capital is a dream come true. My life is coming full circle, and I know that this fight will put me a step closer to achieving everything I have worked so hard for in my career.”

“I’m happy to be back on HBO fighting for another world title,” said Tony Thompson. “If you look at my competition and his [Ortiz], it’s not even close. This isn’t the amateurs. I’m going to use my experience as a professional to take him places he’s never been. Odlanier Solis was a great Cuban amateur but he was also an Olympic Gold Medalist, and I beat him twice. Ortiz thinks he has it tough. I’ve been avoided for my entire career. Just about all my fights have been on short notice and in foreign countries. If I fought the guys Ortiz fought, I’d be undefeated too. If Ortiz is King Kong, I’m Godzilla; Godzilla coming to whoop some ass!”

“Luis Ortiz and Sadam Ali are two top fighters in our sport today and both will impress audiences in the ring on March 5 in their first fights of 2016,” said Oscar De La Hoya, Chairman and CEO of Golden Boy Promotions. “Luis demonstrated in his brilliant knockout over Bryant Jennings in December that he is an elite fighter that can dominate even the toughest opponent. Sadam Ali is a phenomenal fighter, and I think he is the future of the welterweight division, which is very exciting.”

“Tony Thompson is a very talented hard punching contender who has beaten David Price and Odlanier Solis twice each over the last 2 years,” said Leon R. Margules, President of Warriors Boxing and Promotions. “Luis Ortiz will have his hands full on March 5 in clearly his toughest challenge to date, and in Tony’s hometown. We are very excited he is getting this opportunity.”

“We are excited to televise a heavyweight knockout machine like Luis Ortiz in a tough bout on a big stage against Tony Thompson on March 5 in our nation’s capital,” said Peter Nelson, Executive Vice President, HBO Sports. “The winner will take a significant step up in the public’s esteem. The Ali-Vargas co-feature is a terrific 50-50 fight at welterweight that has fans eager to see who will come out on top.”

“To fight for the world championship is something that I have been training and fighting for my whole career,” said Sadam Ali. “I am grateful for the opportunity and promise all my fans I will not let them down. On March 5, I will have my hands raised up in victory as the new WBO Welterweight World Champion.”

“This is a different Jessie Vargas,” said Jessie Vargas. “I learned a lot from my last fight and I am ready to prove that I am still a world champion. I’m coming back with a Vengeance!”

“Jessie Vargas knows what’s at stake this time around” said Carl Moretti, VP, Top Rank. “He plans to take full advantage of this opportunity and we fully expect his hand to be raised as the winner in what promises to be a great fight.”

Luis Ortiz vs. Tony Thompson is a 12-round heavyweight fight for the WBA Interim Heavyweight Title presented by Golden Boy Promotions in association with King Kong Boxing and Warriors Boxing and Promotions. Sadam Ali vs. Jessie Vargas is a 12-round fight for the vacant WBO Welterweight World Championship presented by Golden Boy Promotions in association with Top Rank. The event is sponsored by Cerveza Tecate, BORN BOLD. The DC Armory doors open at 3:00 p.m. ET, and the HBO Boxing After Dark telecast begins live at 10:00 p.m. ET/PT.

A native of Camaguey, Cuba who now makes his home in Miami, Luis “The Real King Kong” Ortiz was one of boxing’s breakout stars of 2015. The 36-year-old southpaw has scored three knockouts in three fights, each bigger than the one before it. Most notably, Ortiz defended his WBA Interim Heavyweight World Championship via seventh-round technical knockout of top contender Bryant “By-By” Jennings on Dec. 19. It was a win that marked Ortiz as a must see for fight fans around the world and securing him a place on heavyweight pound-for-pound list. A decorated amateur in his home country, Ortiz, became a professional in 2010 and has gone on to win multiple titles including the WBC FecarBox Heavyweight, the WBA Fedelatin Heavyweight, the WBO Latino Heavyweight and the WBC Latino Heavyweight titles during his undefeated streak.

A member of the 2008 United States Olympic boxing team, and the first Arab-American to represent the U.S. at the Olympics, Brooklyn’s Sadam “World Kid” Ali has been sailing up the welterweight ladder since a big year in 2013. Ali has had back-to-back title victories over Michael “Cold Blood” Clark, where he won the NABO Welterweight Title; Jeremy “Hollywood” Bryan, winning the WBO Inter-Continental Welterweight Title; Luis Carlos “El Potro” Abregu, defending his titles and giving the experienced fighter his second loss; and Francisco “Chia” Santana where he earned the WBA International Welterweight Title, the 27-year-old with remarkable speed and power is ready for his world title shot against former world champion Jessie Vargas.

Las Vegas standout Jessie Vargas has been following a path to the top similar to that of Ali, as he’s turned back several top foes since making his professional debut in 2008. A former WBA world champion at 140 pounds who defeated Khabib “The Hawk” Allakhverdiev, Anton “The Pick Hammer” Novikov and Antonio DeMarco in super lightweight title fights, Vargas lost a controversial 2015 fight to Timothy “Desert Storm” Bradley for the WBO Interim Welterweight World Championship. Now, Vargas could get his wish of becoming a world champion once more when he faces Sadam “World Kid” Ali for the WBO Welterweight World Championship.

Atlas won’t be a factor in Pacquiao-Bradley 3, says Penalosa »