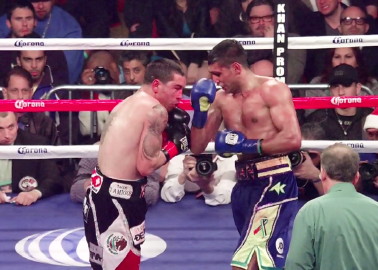 By Gav Duthie: Plenty of jaws dropped at the bombshell news that Amir Khan would be fight Saul ‘Canelo’ Alvarez for the WBC Middleweight title at a catchweight of 155lbs. Amir had been chasing a big fight for quite sometime and after he re-established his relationship with Oscar De La Hoya the fight was made quite quickly. Very few give Khan any chance against the Mexican superstar but credit him for such a huge risk. Although a surprise this was not an unprecedented move and this article will discuss some of the other successes and failures of boxers jumping two weight divisions for a big fight.

In hindsight it was a bizarre set of circumstances that lead to this fight. There was a huge amount of desperation to dethrone Johnson as he was a black heavyweight champion which was unacceptable at the time. He had brushed aside all the heavyweight contenders so promoters thought they would try middleweight champion Ketchel. The middleweight was an extremely talented fighter and was murdered aged only 24 or could have been a true great. Ketchel was down twice in the early rounds and it was rumoured that a gentleman’s agreement was in place that Johnson would carry him the full 20 rounds. Ketchel weighed only 170bs with Giant Jack at 205lbs. It was a total mismatch and despite the agreement Ketchel knocked Johnson down in round 12 when he was saw an opening. He knocked Johnson down and less than 30 seconds Jack had gotten back up and knocked Ketchel out.

Adrien Broner seemed to be heir to the Mayweather throne when the already two-weight world champion bypassed the light welterweight division to face WBA champion Paulie Maliggnaggi at 147lbs. Although Broner succeeded in winning the belt in hindsight the move was a mistake. He struggled to a SD win over the light hitting Paulie but struggled badly against a genuine welterweight opponent when he lost to Marcos Maidana. He also subsequently lost at a catchweight against Shawn Porter at 144lbs. Broner seems to have settled in the 140lb division where he belongs and currently hold the WBA title.

After a flawless performance taking the WBC Lightweight title against David Diaz Filipino Manny Pacquaio was becoming one of the sports top P4P fighters. The actions of Pacquiao tempted Mayweather back out of retirement as he breezed through the divisions. Pacquiao bypassed 140lbs and has hardly ever fought there since. The Filipino only weighed 142lbs for the fight with Golden Boy, 5lbs inside the limit but his speed was apparent. A good year after Oscar had nearly beaten Mayweather he was not the same man and grew old overnight in the ring as Pacquiao boxed rings round him until the one sided contest was stopped.

With negotiations failing for the umpteenth time to face Roy’s only legitimate challenger at 175lbs Dariusz Michalzswski he decided to make history instead. Unbelievably at the time Jones Jnr ‘Mr Untouchable’ wanted to win the heavyweight championship bypassing the Cruiserweight division all together. Jones challenged John Ruiz for the WBA title. The tough, rugged New Zealander had wrestled the title from Evander Holyfield and defended against Kirk Johnson. It was a true David v Goliath contest despite Roy adding a full 20lbs of muscle pre fight. Roy weighed in at 193 lbs, out weighed by 33lbs by the champion at 226. Ruiz plodding style was no match for Jones footwork and hand speed and the American made history winning a UD to become the world champion.

Still is and likely always will be the greatest achievement in boxing history what Armstrong did. He held the featherweight, lightweight and welterweight titles simultaneously. As reigning featherweight champion he had fought a few non-title bouts at lightweight but jumped at the chance for a world title shot against Barney Ross at welterweight. It was a tough fight but Armstrong ran out winner by UD and in his next fight he actually weighed 1lb more when he won the World lightweight title against Lou Ambers.

If Khan is able to achieve this would be right up there with the greatest achievements. This is not facing a feather-fisted Malignaggi or an over the hill Oscar De La Hoya. Canelo is 25 yrs old, has fought 10 times more than Khan, has arguably faced better opposition and can knock the Brit out with either hand. Amir is going to have to box and move and stay disciplined the entire night. My money is fully on Canelo but I give Khan credit for taking it and wish him good luck.

(Any other examples that fans can think of, share them in the comments)

Luis Ortiz vs. Tony Thompson on March 5 on HBO »