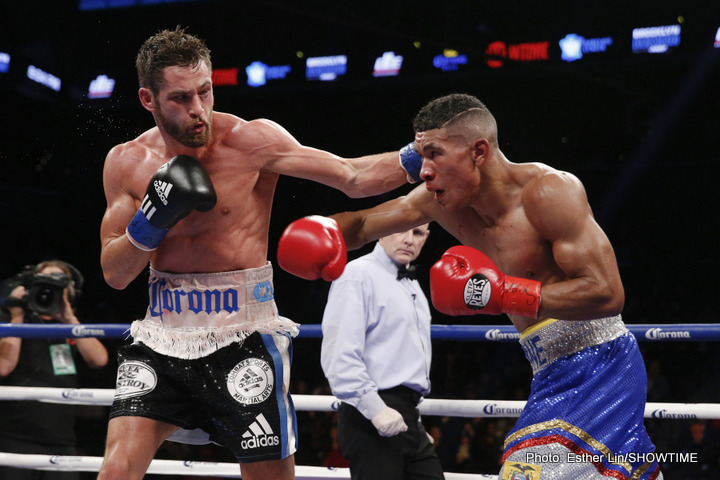 By Dan Ambrose: Unbeaten #2 IBF welterweight contender Errol Spence Jr. (19-0, 16 KOs) will be back in the ring in two months from now on April 16 at the Barclays Center in Brooklyn, New York. The opponent that the 26-year-old Spence Jr. will be fighting is Chris Algieri (21-2, 8 KOs), according to Dan Rafael of ESPN. The fight will be on Premier Boxing Champions on NBC, which means it will likely be bringing in good ratings.

It will be the main event on the card, and the winner of the contest will be the IBF mandatory challenger to champion Kell Brook. This is a big deal for both fighters, because they obviously would likely to get a world title shot.

Algieri has already been there in the past, so it is not going to be new for him if he can get a shot at Brook. Nevertheless, for Spence, this will be his first time in fighting for world title if he can get past Algieri, and it is very much a big deal.

Algieri does not have the punching power or the speed that Spence has going for him. It is going to be next to impossible for Algieri to win this fight because he is not going to be able to box a guy like Spence.

Algieri will not be able to walk Spence down like he was doing in his fight against Amir Khan last year. If Algieri uses that same approach against Spence, he is going to get blasted out. Algieri cannot go directly at a puncher like Spence and think that he is going to be able to last. That will make it too easy for Spence to win the fight.

It’s hard to say whether this fight will be a step up for Spence because he’s already been in with Alejandro Barrera, Chris Van Heerden and Phil Lo Greco. Those guys would be a big problem for a fighter like Algieri to deal with, especially Barrera, who has size and punching power. Algieri has less power than those guys, and he’ll be there to be nailed by Spence. Algieri seems to fancy himself as a slugger ever since his loss to Manny Pacquiao.

Al know I don't turn down nothing

Algieri might wind up getting run over by Spence Jr. much like a speed bump. Spence has been wiping out his opponents with ease lately, and it’s not likely that he’s going to be given any problems by the light hitting Algieri, who has struggled in his last three fights in losing 2 out of his last 3. Manny Pacquiao and Amir Khan beat Algieri. In Algieri’s last fight, he defeated Erick Bone by a close 10 round decision.

Aligeri got a nice payday in his 12 round decision loss to Manny Pacquiao in November 2014. Before that, Algieri vacated his WBO light welterweight title in order to take the Pacquiao fight. Algieri won the WBO 140lb title with a controversial 12 round majority decision over Ruslan Provodnikov in June of 2014 in a fight that many people thought Provodnikov won.

Algieri did not use the right approach to his fight against Pacquiao, as he failed to get out of the cage until the fight was well out of hand. Pacquiao knocked Algieri down six times in the contest. Afterwards, Algieri talked about wanting to start slow in that fight and come on in the second half of the fight. Just why he waited so long to start trying to fight is the big question because it was a poor thing for him to do.

« Golovkin: Canelo-Khan is not good for the sport