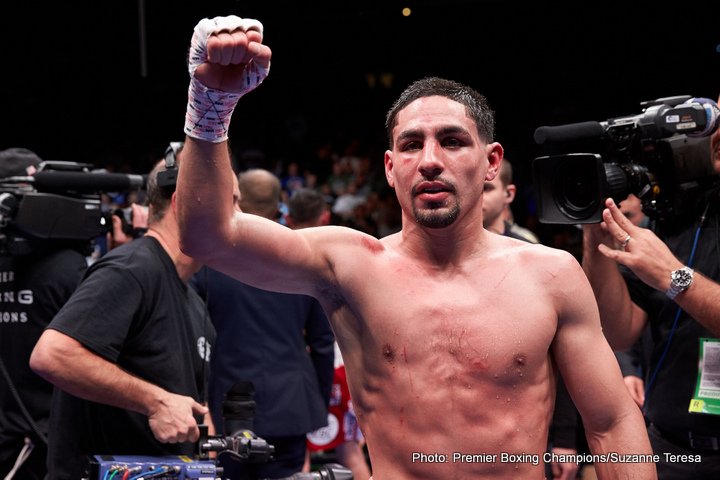 Thurman says Garcia is a future opponent for him, and that he has no doubts he’ll beat him and take away his unbeaten record. Thurman is talking about wanting to fight Garcia after Thurman takes care of business in his March 12 fight against Shawn Porter.

If Thurman wins that fight, then he ‘ll be looking to face Garcia. It’ll be up to their manager Al Haymon about when/if the unification fight takes place. It would be in Haymon’s best interest to try and make the fight take place sooner rather than later, because both Garcia and Thurman look beatable. They haven’t shown Mayweather like ability in any of their fights, and you never know when they’ll taste defeat for the first time. It could happen very soon, especially in the case of Thurman with him facing Porter on 3/12.

“Danny did like this before. He fought like this a little bit when he fought Lucas Matthysse,” Garcia said to esnewsreporting. “But once when Matthysse was bleeding from the eye, Garcia really started opening up and he did start to try and push Matthysse back. He never really tried to push Robert Guerrero back tonight, but he didn’t need to. I knocked down [Leonard] Bundu, and I was winning each and every round. I didn’t need to get a knockout. I needed to get a victory and I did. He [Garcia] got a victory and he is a champion. Did he [Garcia] get exposed in Puerto Rico [against Mauricio Herrera]? Did he get exposed versus Lamont Peterson? You know what I’m saying? Exposed, exposed, exposed. Let’s push the real button. Did he [Garcia] get beat tonight? He’s never been beat. You can hate on somebody that looks like they should lose but don’t lose. I can understand the hate. Don’t worry about it. I’ve had it too. You know what I’m saying? But what you really got to understand is Danny Garcia sticks to some of the fundamentals, and he stays to what he’s good at. Right hand-left hook. Right hand-left hook. Right hand-left hook. It is what it is,” Thurman said.

Thurman fails to point out that many boxing fans did think that Garcia was exposed in his fight against Mauricio Herrera in Puerto Rico. Many fans felt that Herrera was robbed in that fight. Thurman might not feel that way, but you can understand why Thurman is building up Garcia. It helps Thurman if fans see Garcia as unbeatable, because it makes a fight between them bigger in the future. If Thurman says what many boxing fans honestly feel about Garcia, then he would be pointing out that he thinks Garcia was given a gift in his fights against Herrera and Lamont Peterson. Garcia WAS truly exposed in those two fights.

Thurman looked terrible in his fight against Leonard Bundu in 2014. Thurman won every round of the fight, but he was running and stinking up the joint in that fight. It was not a good performance from him. Bundu got the better of Thurman when the two fighters were stationary, but Thurman was the better fighter when he was moving around the ring. The fans booed Thurman for a long time after the fight. It was not the way you want to be received.

“A lot of people are relying on me to take over the division, man,” Thurman said. “I am just going to do my best, you know? If my best is beating the best, then that’s what the outcome is going to be. This is a future fight we’re talking about with Danny Garcia. I have Shawn Porter. He wants to take my 0. Shawn Porter is a worthy opponent. He’s a dog. You’ve never seen him not move forward. It’s similar to how Guerrero was fighting. Even when he was being tagged by Kell Brook, he never stopped coming. He has the strength, he has the conditioning, and he has the drive to be champion once again. You’ll need to tune in on March 12th, and watch one of the best fights with one of the best match-ups this year and then we can start looking at Garcia,” Thurman said.
When asked if he’ll beat Garcia, Thurman said “Like a Cherrio.”

Thurman is kidding himself if he believes he’ll be the guy that takes over the welterweight division. He might be someone who is considered to be the best given the guys he’s been matched up against, but once Thurman is finally put in with Errol Spence, he’ll be knocked out and sent back to contender status. I think Thurman is capable of being one of the belt holders, but not the top champion in the welterweight division. I don’t think he’ll beat Shawn Porter or Spence. I expect to see a lot of running and holding from Thurman on March 12 in his fight against Porter. I think it’s going to be ugly to watch. If you thought you saw a lot of holding and running from Danny Garcia last Saturday night, just wait and see all the ugly holding and running from Thurman. He’s going to take it to another level with his spoiling and non-fighting. I just hope the judges have their glasses on that night, because it would be a pity to see another controversial decision in the sport.

I think Thurman will beat Garcia when that fight happens in the future, but that’s saying much. Garcia is not a good champion, and likely wouldn’t be a champion if he was matched against a good opponent like Errol Spence. Even Amir Khan would have likely beaten Garcia easily last Saturday night. I don’t think Garcia’s power has carried up from the 140lb division with him. Garcia is there to be beaten, because he doesn’t belong at 147. His power didn’t look impressive at all last Saturday night.