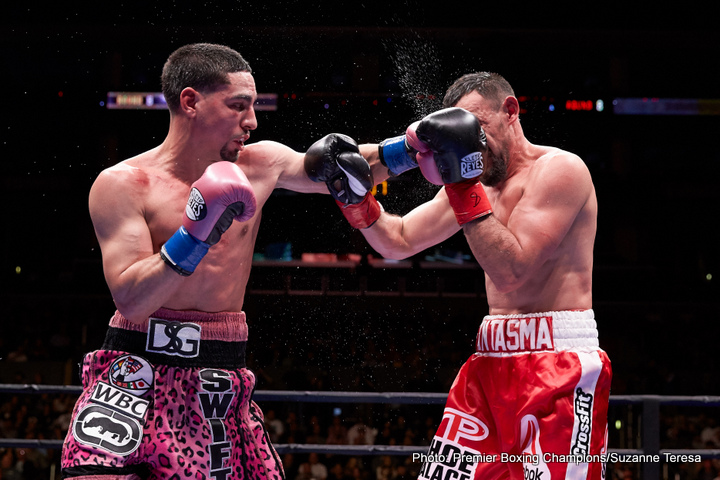 By Jim Dower: Former WBA/WBC light welterweight champion Danny Garcia (32-0, 18 KOs) showed off his boxing skills as well as his power tonight in beating former two division world champion Robert “The Ghost” Guerrero (33-4-1, 18 KOs) by a 12 round unanimous decision to claim the vacant WBC 147lb title on Premier Boxing Champions on Fox from the Staples Center in Los Angeles, California.

The three judges were in agreement in scoring it 116-112, 116-112, and 116-112. The scoring was pretty much on target. There were a couple of rounds that could have gone either way in the first half of the fight. Guerrero lost the fight by not attacking hard in the second half the way he needed to.

Lamont Peterson created the blueprint later year in how to beat Garcia by putting heavy pressure on him, throwing massive amounts of punches, and not giving him any rest. Guerrero didn’t follow any of what Peterson did, and this made it easy for Garcia to pot shot, move and tie Guerrero up all night.

Garcia’s harder and more accurate punches enabled him to win almost every round in the 2nd half of the fight. Guerrero did fight well enough to win the 10th and 12th rounds in my scorecard, but the judges didn’t seem to agree.

Guerrero was never hurt in the fight. He took Garcia’s best punches in every round without showing any signs of being bothered by them. It was fortunate for Guerrero that Garcia was only landing four or five good shots in each round. If Garcia had landed the kind of shots that Keith Thurman had landed against Guerrero, then he might have gotten a knockout.

Garcia started out boxing and holding in the 12th round. However, after the crowd started booing him loudly, he stood in the center of the ring and fought toe-to-toe with Guerrero in the last minute of the round. The brawling style of fighting favored Guerrero, who definitely got the better of the action.

After the fight, Garcia wouldn’t commit to who he wants to fight next. “I want to fight the best,” Garcia said. “Danny Garcia never ducks anybody.”

Some fans believe Garcia ducked Viktor Postol in choosing to move up in weight to 147 rather than defend his title against the tall Ukrainian.

There’s a possibility that #1 WBC Amir Khan could face Garcia later on in the year for his WBC title. If Khan chooses not to take the fight, then Garcia will likely need to face Sammy Vasquez. Khan vs. Garcia would be a good fight. It would enable Khan to attempt to avenge his loss to Garcia in 2012.

Unbeaten welterweight contender Sammy Vasquez (21-0, 15 KOs) outclassed Aron Martinez (20-5-1, 4 KOs) in out-boxing him and halting him in the 6th round on Saturday night in a beautiful display of boxing by Vasquez.

Martinez took a pounding in the fight and failed to come out for the 7th. Martinez appeared to have had an injury that he sustained at some point in the fight. It must have occurred early because he never really got into the fight.

The 6’7″ Breazeale was knocked down in the 3rd round. However, Mansour suffered a jaw injury that required the fight to be stopped. It was fortunate for Breazeale because he did not look good in the fight, and was struggling from the pressure and power of Mansour.

For Breazeale, this was his second poor performance in a row. In his last fight, he won a questionable 10 round decision over Fred Kassi last September in a fight that many boxing fans thought Kassi won.

Undefeated lightweight Alejandro Luna (20-0, 15 KOs) kept his unbeaten record intact with an 8th round stoppage over journeyman Alan Herrera (34-8, 22 KOs). Herrera opted not to answer the bell for round nine.