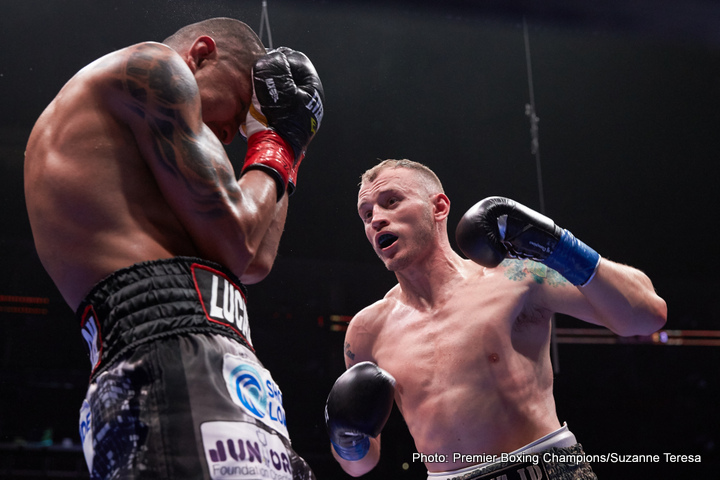 By Dan Ambrose: In a predictably one-sided fight, #12 WBC Sammy Vasquez (21-0, 15 KOs) defeated high level journeyman Aaron Martinez (20-5-1, 4 KOs) by a 6th round stoppage in their WBC welterweight semi-eliminator bout at the Staples Center in Los Angeles, California. Martinez quit on his stool after the 6th round due to an arm injury to his left arm.

The World Boxing Council clearly made a mistake in having the 2nd tier Martinez fight in an eliminator against a fighter as talented as Vasquez. The WBC should have wised up and ordered #9 WBC Errol Spence Jr. to fight Vasquez, because that would have been a whole completely different fight. Vasquez would have been under the gun if he forced to fight someone good instead of Martinez. The WBC basically lobbed a softball to Vasquez by having him fight a weak opponent like Martinez.

The fight was painfully boring to watch due to Martinez mostly backing up to the ropes every round, and not throwing punches. Martinez didn’t throw hardly anything in the first three rounds. By the time he did start letting his hands go in the 4th, he was already well behind in the contest.

The fans are ringside began to boo the lack of action in the 6th. They had a reason to because Vasquez was doing a lot of holding on the inside each time Martinez would come in close, and there wasn’t much action to speak of.

Vasquez looked decent in the fight, but he showed zero punching power. His whole game was to land pitty-pat shots, hold and move out of the way when Martinez would come at him. It was very boring to watch. I can’t see Vasquez beating any of the good welterweights like Spence, Shawn Porter, Keith Thurman, Danny Garcia or Amir Khan. Any welterweight with punching power and talent, I think would beat the light hitting Vasquez.