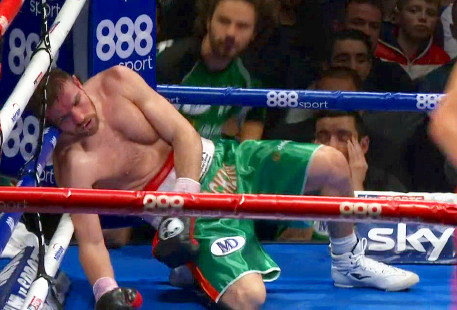 (Matthew Macklin seen here having a bad day at the office against Jorge Sebastian Heiland) By Scott Gilfoid: Three time world title challenger loser Matthew Macklin (33-6, 22 KOs) will be fighting this Saturday at junior middleweight champion Jason Welborn (17-3, 6 KOs) in a scheduled 12 round bout for the vacant WBC International super welterweight title at the Barclaycard Arena, in Birmingham, UK.

Macklin, 33, is dropping down in weight to the 154lb division because he feels that the move will help rejuvenate his sagging career. Macklin’s star has kind of faded with his recent 10th round knockout loss to Jorge Sebastian Heiland last year in November 2014.

That was kind of an unexpected defeat by Macklin because there were a lot of boxing fans who felt that he could beat a guy in Heiland’s class. After all, Heiland doesn’t look to be as good as the ranking that the World Boxing Council has given him. But unfortunately for Macklin, he was worn down by Heiland and eventually knocked out in a brutal fashion in the 10th round.

Macklin looked even worse against Heiland than he had in his 3rd round knockout loss to IBO/WBA middleweight champion Gennady Golovkin in June 2013. Maybe it’s a confidence thing with Macklin, or it could be that he’s totally shot as a fighter.

I see it more of a case of the middleweight division getting better in the last two years, and Macklin is now been passed up by better fighters.

Believe it or not, Macklin still thinks he can win a world title at the age of 33. He thinks will be different for him at 154. If he’s going to win a world title, then he obviously will need to do it against new WBO junior middleweight champion Liam Smith, because he’s arguably the weak link among the champions at 154. I mean, I don’t see Macklin doing well at all against WBA champion Erislandy Lara or IBF champ Jermall Charlo.

Those are really bad match-ups for Macklin, and I could see things going really bad for him if he gets inside the ring with one of them.

“I still think I can win a world title,” Macklin said to skysports.com. “After the fight with Heiland I did think maybe I am not what I was. He is a good fighter with a horrible style to fight, but after three rounds of feeling sharp, I just felt that I had no energy in there.”

Macklin made a very average fighter in Heiland look like he was gold in that fight. It was pretty startling to watch because Heiland is someone who would likely be obliterated by Daniel Jacobs, Peter Quillin, Andy Lee, Golovkin, Saul “Canelo” Alvarez and Miguel Cotto in two or three rounds. If Macklin can’t even beat Heiland then that kind of tells you what his destiny will be at 160 at this point in his career.

“I still have plenty to give but it’s just been about changing the way I train a little bit, small adjustments, and I think that I am going to be more imposing at super-welterweight and my power will be great,” Macklin said.

Macklin will be coming into this Saturday’s fight with Welborn with a two-fight winning streak after beating these two obscure fighters: Sandor Micsko and Chris Herrmann. Those fights proved nothing for Macklin other than the fact that he can still beat 3rd tier opposition when he has to.

The fact that Macklin was brought all the way back to 3rd tier after his loss to Heiland suggests that there’s some worry there from Macklin’s management.

Welborn is a 2nd tier guy, and a very winnable fight for Macklin. If he can’t beat this guy then he absolutely need to retire from boxing because there would be nowhere for him to go.
Welborn has been beaten in the past by Liam Smith, Frankie Gavin and Tyan Booth. He’s obviously no world beater, as his record shows.

Other fights on the Macklin vs. Welborn card are as follows: