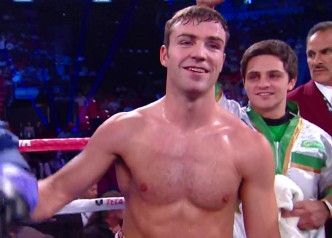 by Matthew Macklin: Last month, at the O2 Arena in London, around the half way point in my fight with Brian Rose, I knew it was time to retire. My face was marking up, I was getting frustrated at not being able to land my shots and I knew that physically, after a long career my body was telling me that enough was enough. I also knew that I didn’t want to go out like that so with the help of my brother Seamus I decided to end my career on my terms and pulled the win out of the bag in the last few rounds. Deep down I came to the realization on the night that it was probably going to be my last fight. I turn 34 in two days time and, after much reflection I have decided that following 24 years in the sport, over 80 amateur fights and 41 professional fights, it is time to hang up my gloves.

15 years is a long time in professional boxing and, for me, it has been a real roller-coaster journey! I’ve had a great career but I know that now is the right time to bow out. I’m not the fighter I once was; Father Time catches up with us all eventually. I never wanted to do things the easy way or to be a big fish in a small pond.

I wanted to know how good I was and test myself against the very best the sport had to offer and I can proudly say I did that. I fought Sturm, Sergio Martinez and the best of them all Gennady Golovkin. Most importantly, I fought them all in their primes.

While I’m very grateful that boxing gave me such wonderful moments it’s a sport that demands a lot of sacrifice. You miss out on a lot of things so I’m excited to move on to the next phase of my life now. I’m happy with how I finished the Rose fight and conducted myself throughout my career. I’m proud of what I achieved from winning National titles and a Senior ABA title as an 18 year old in the amateurs to winning Irish and British titles and becoming a two time European Champion as a professional. Sadly, I never managed to get my hands on that elusive World title but I should have done that night in Cologne in 2011. I believe

I was very unlucky to be on the wrong side of a bad decision to Felix Sturm.

There are so many people I want to thank for supporting me throughout my career. I have worked with some great promoters over the years and had fantastic times with all of them. Thank you to Frank Warren, John Wischusen (when he was running things at Matchroom), Ricky Hatton, Lou DiBella and Eddie Hearn. I also want to thank the boxing media and television networks I worked with during my career for their support and coverage.

I want to thank all my trainers down through the years starting from when I was just 10 years old and my father took me to the Small Heath Amateur Boxing Club in Birmingham where I was trained by a Mayo man, Paddy Benson. I trained with Paddy and Tommy Lynch in the early days of my professional career before moving to Manchester and working with Billy Graham and Joe Gallagher and with Buddy McGirt in the U.S. I also had the pleasure of working with Jamie Moore, Richie Woodhall, Freddie Roach and Peter Harrison.

One man who has always been in my corner is my brother Seamus who has shared my journey with me. From a young age he has witnessed all that boxing entails and I have no doubt that he will go on to become a great trainer of champions. He has been with me every step of the way from Manchester to Vero Beach, back to Manchester, to New York, Los Angeles, Marbella, Birmingham and everywhere in between! He ended up being my head coach for my last few fights and was brilliant in the Rose fight talking me through a fight that was slipping away from me as the realization that it wasn’t there any more was coming over me. I only wish it was Seamus who was approaching 35 and me 25, we would have been a great combo!

There have be so many great nights but I think the Sturm fight in 2011 (leaving aside the judge’s decision!) was probably the best. I had announced myself on the world scene in a great fight against one of the longest serving World Champions in the sport and although we didn’t get the decision we celebrated anyway because we knew who won the fight and so did they! Over 300 fans had traveled over from Ireland and England and easily out sang the 19,000 Germans in the Lanxess Arena. The next day we ascended upon the Corkonian, a lovely little Irish pub in the city and drank it dry! Literally. They ran out of Guinness, beer and cider and in the end they even ran out of lemonade!

Another highlight has to be fighting future Hall of Famer (and then one of the best pound for pound fighters in the world) Sergio Martinez at the famous Madison Square Garden in 2012. The fact that it was St.Patrick’s day made it all the more special and I must admit to smiling hugely when I saw the HBO billboard in Times Square! Earlier in my career beating Wayne Elcock in “The Battle of Brum” with so much pride on the line and knocking out Amin Asikainen in the first round to win the European title were also brilliant nights for me and I will always remember them fondly.

Strange as it may seem, my defeat to Jamie Moore in 2006 was a massive night for me (despite the fact that I lost and needed to stay in hospital on a drip following the fight!). It’s possibly “the” fight. It’s certainly the one people still watch and talk about. I left it all in the ring that night, and many thought I’d never be the same again but, if anything it was the making of me. To this day, Jamie remains a good friend and will be a friend for the rest of my life.

Another night that will always stick in my memory was headlining at the 3 Arena in Dublin against Jorge Sebastian Heiland. In the ring it was a bad night for me but standing there before my ring walk as a second generation Irishman, soaking up an electric atmosphere while the crowd blasted out ‘ole, ole, ole’ is a moment that filled me with great pride and will stay with me forever.

I’ve been very lucky to have had so many great people help me out over the years and I would like to take this opportunity to thank them. Gorgi Singh has sponsored and supported me my whole career. He is a family friend for life. Martin Donnelly is one of the most generous men I’ve ever met and has done so much for Irish sport, especially boxing and the GAA. I met Martin in 2005 in Boston and he sponsored me from that point until now.

I also want to thank Des White of Sierra Communications, a proud Roscommon man and later TJ Malone for their generosity and support. Ranjit Boporan of Green Isle foods is another person who I want to thank for his support and generosity. I also want to thank Ron Boddy for helping me and advising me in the early days and for being a genuine friend.

Boxing can be a lonely sport and when the bell rings you are on your own but I’m very grateful for the support I had from a great back room team throughout my career. Back in 2005, I called Brian Peters desperate to fight on a card in Ireland and he delivered an Irish title fight for me which I won on the night of my 23rd birthday. Shortly afterwards Brian became my manager and I consider him a friend for life, as is Tomas Rohan who has worked closely with Brian throughout my career.

Another friend, Anthony Catanzaro,from New York came on board as an advisor after my fight with Gennady Golovkin. He is a genuine man, who fights hard for the boxers he’s involved with. My sports lawyer David Becker was with me from day one of my career. He’s a very clever and very genuine man and someone I was very privileged to have as part of my team.

I met Daniel Kinahan after my fight with Jamie Moore and we clicked straight away. He’s one of my closest friends and was very much a part of my team and I want to thank him for his kindness, generosity and for giving me so much great advice and always being there for me.

Most of all, I want to thank my friends and family, especially my father Seamus, mother Kathleen, brother Seamus and my two sisters, Theresa and Katie, who have always encouraged me and traveled all over the world to support me.

There were so many other people who have helped me, too many to thank them all but you know who you are. Finally, I want to thank all the fans that watched me and supported me throughout the years, many of them traveling far and wide to do so. Without you there would have been no journey.