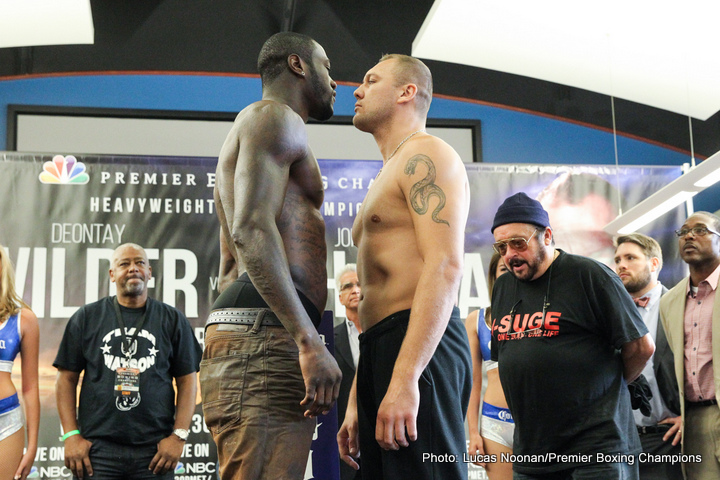 By Tim Fletcher: WBC heavyweight champion Deontay Wilder (34-0, 33 KOs) weighed in today for his fight on Saturday night against France’s Johann Duhaupas (32-2, 20 KOs) for their fight at the Legacy Arena, in Birmingham, Alabama.

It looks like Wilder is attempting to bulk up to add weight to his wiry thin frame, but it doesn’t seem to be helping him.

The 6’5” Duhaupas weighed in at 236 pounds, and looked almost tall enough to look the 6’7” Wilder eye to eye when the two of them stood for the face off. Despite Duhaupas having more weight on him compared to the 228lb Wilder, he doesn’t have Wilder’s hand speed and punching power. Duhaupas has to make the most of his opportunity by going after Wilder and looking to get him out of there early before he’s gotten a chance to land his big bombs. Wilder hits too hard for Duhaupas to wait before going for his own knockout.

Duhaupas isn’t really a puncher. He’s more of a boxer, and he focuses on hitting and moving when facing big punchers. Duhaupas is going to be looking to keep away from Wilder on Saturday night and setting traps for him the way he did against his last two opponents Manuel Charr and Erkan Teper. Duhaupas likes to do is wait until his opponents are out of position before he loads up on his power shots. He’s pretty good at doing this.

In his last fight against Charr, Duhaupas was able to catch Charr frequently with right hands when he was coming forward. Duhaupas would move around the ring and then suddenly stop and nail Charr with his best punches. Whether Duhaupas has enough to stagger and hurt Wilder remains to be seen. Eric Molina had Wilder hurt at one point in their fight last June after hitting him with a big shot. But Molina is a stronger puncher than Duhaupas. I don’t think it takes a big shot to hurt Wilder. He seems to be vulnerable even against moderate punchers if he gets hit right.

Wilder needs to win this fight for him to get a chance to fight the winner of the Wladimir Klitschko vs. Tyson Fury fight. If that fight is delayed for a long period of time, then Wilder will probably need to face his #1 WBC mandatory challenger Alexander Povetkin in early 2016. The World Boxing Council said that Wilder can face the Klitschko-Fury winner, but they might not be okay with Wilder waiting for a lengthy amount of time for Wladimir’s injured left calf to heal up.