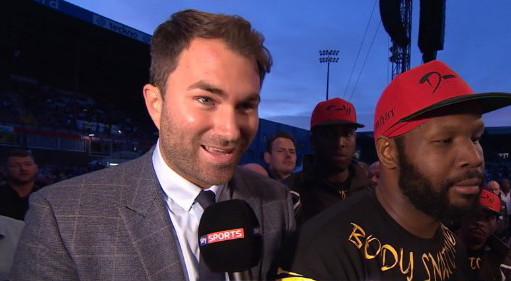 By Scott Gilfoid: Promoter Eddie Hearn got some really bad news today with IBF/IBO/WBA/WBO heavyweight champion Wladimir Klitschko postponing his fight against Tyson Fury because of a calf injury. This means that without the Klitschko-Fury fight, the Kell Brook vs. Diego Chaves fight will be the headliner fight on Sky Box Office on October 24th from the Sheffield Arena in Sheffield, UK. If Hearn discounts the fight 95% by charging only 5% for the Brook-Chaves fight card, then I think it might be worth it to purchase it along with the other mismatches on the card. But no way do I see it worth the whole price now that Fury-Klitschko is off the card.

Brook-Chaves is not a PPV worthy fight in my view, and the undercard is not a strong one to where a lot of boxing fans will want to pay their hard-earned money to purchase the card. I’d like to think that Hearn will do the right thing and take the Brook-Chaves fight off of Sky Box Office and just put it on regular Sky, but I doubt it.

My guess is the Brook vs. Chaves fight will remain a PPV fight card but without the interesting fight between Klitschko and Fury to prop it up.

Hearn can’t be happy at all about this because it potentially puts him in a bad place. Some of his recent fight cards have been filled with mismatches and generally dull fights. Brook vs. Chaves is not a great fight and the undercard if pretty to say the least. I think when Hearn made this card, he had in mind that the Fury vs. Klitschko fight would help prop up the event with their fight from Dusseldorf, Germany being televised on the same Sky Box Office PPV card. But once Klitschko pulled the rug out from under his fight with Fury, it left the fans with just Hearn’s Brook-Chaves fight card, which is filled with mismatches and not interesting fights. 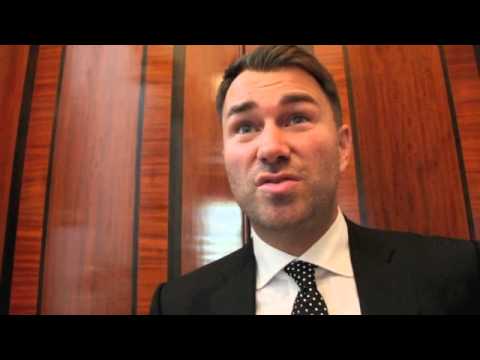 Here are the fights on the Brook-Chaves undercard:

In order to make the Brook-Chaves fight card worthy of being a pay-per-view event, Hearn is going to need to find a very, very good opponent for Eubank Jr. to fight, as well as Ricky Burns. Those guys are going to need to fight some world level opposition for it to be worth paying to see the card. But even then, I still don’t think the card is strong enough to ask the boxing fans to pay to see it. Hearn needs to add some of his other fighters like Lee Selby or Anthony Joshua to beef the card up and make it worth paying for because right now I don’t see it as being worth paying anything at all. That’s my view. I wouldn’t anything for this card.

It’s unclear what Sky Box Office and Hearn will be looking at in terms of PPV numbers for this card. If they’re expecting a lot of buys then I think they’re going to be sadly disappointed.

Instead of Hearn matching Brook against Chaves, a fighter with a 1-2-1 record in his last four fights, he should have put him in with an arguably much better fighter like Errol Spence Jr. Brook could then test his punching power against Spence’s own formidable punching power. My guess is Spence would come out on top in that contest, and I don’t think I would be the only one who would feel this way.

I think speak for everyone when I say Hearn should do the right thing and take the Brook-Chaves fight off of Sky Box Office and make it a non-PPV fight card. It’s just not good enough in my view to pay for, and I think he’ll anger fans if he asks them to still pay the same amount for the fight card without the Klitschko-Fury fight on the card.