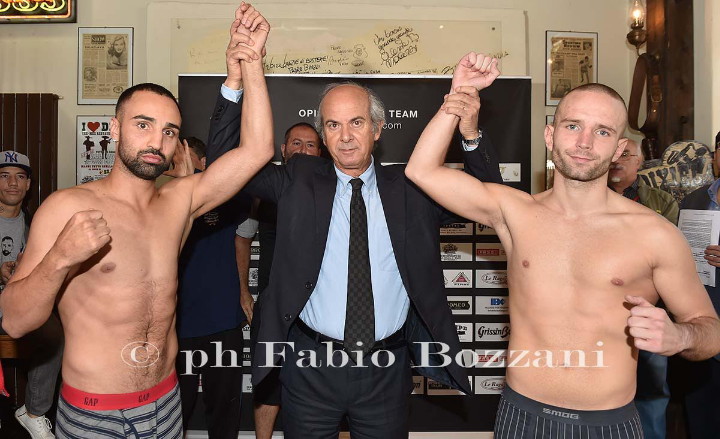 By Tim Fletcher: Paulie “Magic Man” Malignaggi (33-7, 7 KOs) weighed in earlier today for his fight against journeyman Laszlo Fazekas (27-21-1, 17 KOs) for their eight round fight on Saturday night at the Principe Theater in Milan, Italy.

Malignaggi weighed in at 148 pounds. His opponent Fazekas weighed in slightly heavier at 149.5 pounds. Malignaggi, 34, is trying to get a win under his belt after losing his last two fights by knockout against Danny Garcia and Shawn Porter.

Malignaggi has lost 3 out of his last 4 fights. He doesn’t look like a shot fighter though. It’s just a case of Malignaggi fighting very good fighters in Garcia and Porter. Malignaggi’s other recent defeat was to Adrien Broner in 2013, and that was a controversial 12 round split decision in a fight that should have gone Malignaggi’s way.

Malignaggi is killing two birds with one stone by choosing to fight a fighter in the class of Fazekas in Italy. Malignaggi has always wanted to fight in Italy and put on an impressive performance. Choosing Fazekas, 25, as his opponent virtually assures that Malignaggi will look good and will win the fight as well.

Another important reason for fighting the likes of Fazekas is that it gets Malignaggi back on his winning ways. Malignaggi is still ambitious despite losing his last two fights, and he reportedly is interested in fighting for a world title against IBF welterweight champion Kell “Special K” Brook.

By winning enough fights against guys like Fazekas, and by letting Brook’s promoter Eddie Hearn know that he’s interested in fighting him, Malignaggi could get his wish in the near future once one of the sanctioning bodies gives him a top 15 ranking.

It wouldn’t be surprising if Malignaggi finds himself back in the top 15 after Saturday’s fight against Fazekas. If Malignaggi can win in an impressive fashion, he might be able to pick up a top 15 ranking. That in turn will make Malignaggi eligible to getting a title shot against Brook. It’s a fight that Brook would receive a lot of criticism if he took it now against Malignaggi, but boxing fans might not feel the same way three or four fights from now once Malignaggi has some wins under his belt.

Malignaggi is going to need to respect Fazekas’ punching power because he’s got some pop in his punches. Fazekas isn’t going to roll over on Malignaggi and let him win without putting up a good fight. He obviously knows that Malignaggi has been knocked out in his last two fights and he’ll be looking to stop him too.