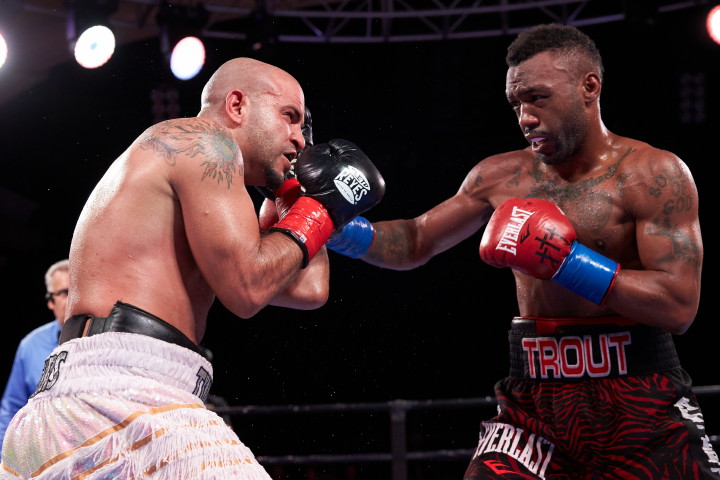 (Photo credit: Suzanne Teresa/Premier Boxing Champions) By Jim Dower: In a mismatch, former WBA junior middleweight champion Austin “No Doubt” Trout (30-2, 17 KOs) kept his winning streak going in stopping an out of shape Joey Hernandez (24-4-1, 14 KOs) in the 6th round on Tuesday night at the Hollywood Palladium in Hollywood, California. Trout, 29, knocked Hernandez down with a body shot in the sixth round.

Hernandez got to his feet just as the referee Jack Reiss was waiving him off. The official time of the stoppage was at 3:00 of the 6th.

Trout, #4 IBF, #5 WBA, #7 WBC, was body slammed in the 4th round by Hernandez in response to him getting hit low. This led to referee Jack Reiss taking a point off for the foul.

The southpaw Trout had no problems picking off the round body Hernandez with shots to the head and body. The body shots bothered Hernandez from points of fight. He had a flabby midsection, and he didn’t like the punches hitting him in the waist again and again.

Hernandez didn’t help himself by rehydrating 20 pounds after weighing in at 157 pounds during the weigh-in on Monday.

“I’m going to the top of the food chain now,” Trout said after the fight. “This is a statement to Julian Williams. If he wants it, he can come and get it next.”

This was Trout’s fourth consecutive victory since losing back to back fights to Erislandy Lara and Saul “Canelo” Alvarez in 2013. Trout wants to fight those two guys again, but that’s not likely to happen anytime soon. Trout might eventually get a rematch against Lara once he becomes his mandatory challenger, but he can pretty much forget about Canelo giving him another shot. There are too many other fighters in the boxing world for Canelo to fight right now. He’s not going to bother fighting a guy like Trout unless he picks up a title or two.

It was good to see Trout not getting hurt or knocked down in this fight like we’ve seen in the past. Daniel Dawson had Trout down twice in their fight in September of last year. Trout won that fight by a 10 round unanimous decision. Lara and Canelo both knocked Trout down as well.

Trout is going to need to start fighting better opposition to prove that he’s gotten better since his defeats to Lara and Canelo. It’s impossible to say for sure that Trout has improved in the last two years with the poor opposition that he’s been facing. He’s going to need to fight better opponents than this if he wants to show something. Trout will be turning 30 this month on September 18th, and that’s a signal that he needs to speed up his climb to get back on top. He’s put two years into coming back from the losses to Lara and Canelo. It’s time that he take that big step and fight for a title.

For Hernandez, he’s now lost 3 out of his last 4 fights.