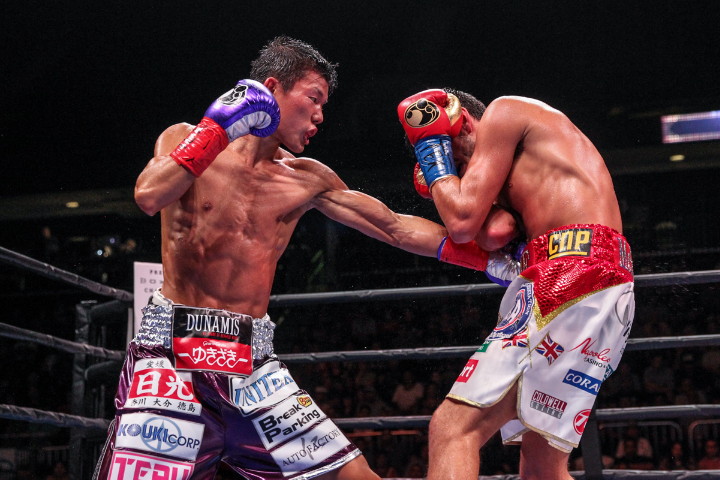 Dirrell showed fast hands, but it really is worrying that he couldn’t put Rubio away – his lack of power really is worrying. Rubio was moving up in weight after being dominated by Gennday Golovkin so this fight was truly exceptional matchmaking from Dirrell’s promoters to make him look good.

In truth, Dirrell should never have lost to Badou Jack who is a slightly above average fighter who does the basics well but nothing exceptional. It kind of shows you where Anthony Dirrell ranks in the super middleweight division; his biggest win was the one against Sakio Bika and apart from that (and a draw against the same fighter), he has quite the padded record.

The thing I most enjoyed about his performance was his back flip at the final bell….Dirrell has good agility and fast hands but seems to not want to mix it with the best in the division. Rubio never really offered much with his slow punching and straight ahead style – this fight had far more for Rubio to gain than Dirrell and Rubio just looked like he had nothing left in the tank after a long and battle hardened career; it may now be time for him to get out of the sport to avoid taking any more one-sided battling at the top level. Instead of fighting a Rubio, Dirrell needs to be fighting a Degale, Abraham or even a Felix Sturm to get a notable win on his record and get his name back to the top of the division. At least his brother Andre has fought some better names (despite losing twice in his biggest fights) and is far more difficult to face due to his lightning quick hands, elusive style and southpaw stance. It is difficult for both the Dirrells to be the best in a division which includes Andre Ward (for now!) but when you have title holders such as Chudinov and Abraham, you would think there are opportunities there for both to make a mark.

In the other bout of the night, Jamie McDonnell cemented his place among the best at bantamweight with a hard fought, but clear victory over Tomoki Kameda – McDonnell walked him down all night and landed some good punches throughout, knocking Kameda down with a good shot that caught Kameda off balance in the 12th. Kameda fought well and it was competitive, especially early on where I had Kameda winning a good share of the opening 5 round but McDonnell was supremely conditioned for this fight and should now either go after a fight with the winner of Yamanaka-Moreno or move up to super-bantamweight and look to get a domestic super fight with Scott Quigg. To be honest, I think he should stay at bantamweight and clean up the division which seems very do-able at this stage. The exposure in the USA is really helping establish McDonnell as a world class fighter who is always in an exciting fight and will certainly help with future bouts.

Kameda played his part and still definitely has a good future in the division; we should probably go after the WBO title which is certainly a winnable fight against an opponent he has beaten before. It was definitely the fight of the night and I think that, of both the fights, Jamie McDonnell has done a great job of standing out in the crowd and British fans will be very proud of his achievements.

Groves: Badou Jack hasn’t had to face a tough test like me »