Is Paul Smith being overweight a tactical choice? 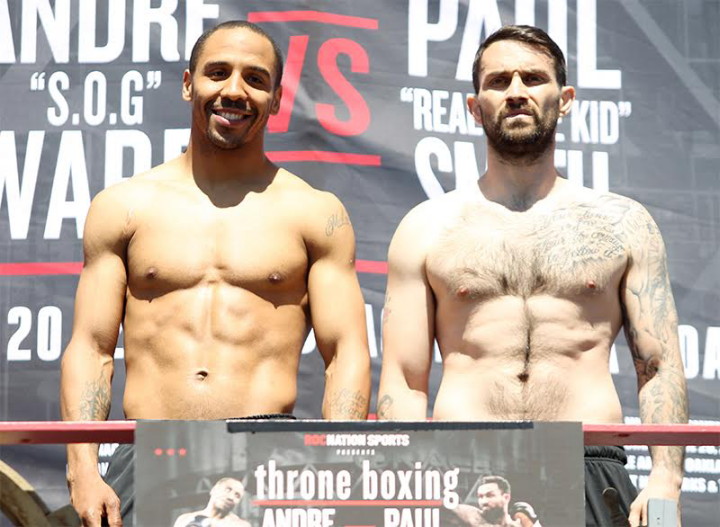 (Photo credit: Tom Hogan – Hoganphotos/Roc Nation Sports) By Gav Duthie: Shortly after the confirmation that Paul Smith 35-5 (20) would be fighting Super Middleweight supremo Andre Ward 27-0 (14) the Liverpudlian confessed he would have fought Wladimir Klitschko for the money on offer. This suggested to me that this was no more than a retirement fund for Smith and not a fight he actually believed he could win.

On the news that Smith has weighed in at 176.4lbs (4.4lbs over the contracted limit) I’m not sure what to make of it. He will be fined a substantial fraction of his purse which makes the big payday less lucrative.

My question is has he came in overweight because he hasn’t trained and knows he will lose or is he deliberately heavy and actually believes he can win the fight using the advantage tactically?

Paul Smith is an active fighter. He fought in only late February for the WBO Super Middleweight title against Arthur Abraham at 168lbs. Smith has fought at this weight his entire career so I am struggling to fathom why he can’t make 172lbs. In fact even if this was a full light heavyweight fight (175lbs) he would have missed that also. This means he is technically a cruiserweight for this fight. If he was just fighting for the money why take such a big fine? It is hugely unprofessional and Ward is understandably angry so why has he done this.

There are two ways to see this

1. He hasn’t trained and is out of shape
2. He thinks he can beat Ward due to the extra strength and Ward’s inactivity

It is quite likely that he is demotivated after his double title failure against Abraham and hasn’t been serious enough in camp. He has mentioned several times though that if there is any time to face Ward it is now. Smith is a very good inside fighter all be it at domestic level so it is possible he has watched Ward and wants to come in bigger and stronger.

In the build up to this bout I have not for one second entertained the notion that Smith can win this. If Ward’s catch-weight intention was to see how he might cope fighting at light heavyweight then this could benefit him. He is likely to be much smaller than Smith on fight night so how will he cope with that. Ward has beaten many physically strong opponents like Arthur Abraham, Mikkel Kessler and Carl Froch but the likes of Sergey Kovalev and Artur Beterbiev are a different story.

It will be interesting to see if Smith can get any joy from this fight being bigger than his opponent. I obviously still feel that Ward will win but how easy will it be and can he knock Smith out. If he does then I think he should spend the rest of his career at 175lbs.

Questions for the reader

– Is this a tactic from Smith or is he just not taken the fight seriously?
– Is the increasing amount of catch-weight fights bad for the sport?

Floyd Patterson: First to regain heavyweight crown on this day 55 years ago »