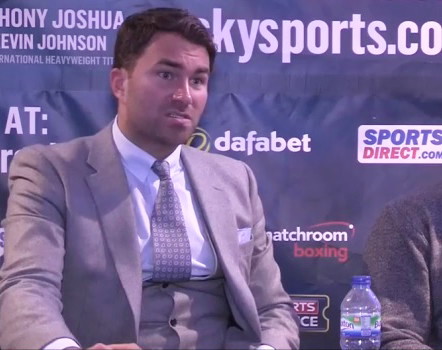 By Demetrius Luke: Matchroom Sport promoter Eddie Hearn is looking to match heavyweight prospect Anthony Joshua (13-0, 13 KOs) in with some top names in the division before the year is out starting with a big fight in September with a boxing domestic name along the line of David Price, Derick Chisora or Dillian Whyte.

After that Hearn is looking to move onto European level with some of the experienced names that have a solid background with them from beating some previous big names.

Anthony Joshua is coming off the back an impressive two round destruction of American Kevin Johnson on Saturday night. Johnson who previously went the distance with Vitali Klitschko, Tyson Fury and Manuel Charr was quickly disposed of by Joshua in an emphatic way and now looks set to move through the heavyweight rankings.

The names being mentioned are Tony Thompson, Chris Arreola, Odlanier Solis and Manual Charr, these guys are a real step up from the competition Joshua has faced since turning professional. Joshua has earned his apprenticeship in the sport now and his resume is very impressive for a fighter who turned professional just a near 18 months ago. They’re bigger names in the division than Joshua who have not faced as many notable names as Joshua. His promoter has bought him along at the perfect rate and is now set to be let off the leash on the real tests.

Hearn also mentioned that a fight between Anthony Joshua and Bryant Jennings is two to three fights away and believes Joshua is very close to moving to world level at the rate he is improving which looks to be around 2016.

Anthony Joshua is physically a big fighter, standing at 6’6″ in height and weighs around 248 pounds from his last fight, he is powerful, fast and his conditioning is very good and out of the ring he has the attitude that will carry him through the sport with a likeable reputation.

Anthony Joshua is a huge name in Britain which is partly down to his amateur success winning Olympic gold in 2012 London games and being under a big promoting brand in the UK, his stock is only rising and will continue to with the performances he keeps displaying.

« The Best Brits never to win a world title