By Michael Montero:, photos by Tiffany Lam – Saturday afternoon just south of Los Angeles, Al Haymon’s Premier Boxing Champions returned to the StubHub Center with an afternoon card. Three bouts, headlined by Robert “The Ghost” Guerrero taking on Aaron Martinez, aired live on NBC. And although the crowd at the venue was sparse, the action in the ring delivered.

In the TV opener, undefeated heavyweights squared off as Dominic Breazeale of nearby Glendale took on Yasmany Consuegra, of Cuba. This was an action packed contest that saw Breazeale eat more leather than he ever has thus far in his pro career. But the Cuban was simply too small (6’2”), and the taller man (6’7”) began walking him down and wearing him down. In the second round Breazeale hurt his opponent with a hard uppercut on the inside (impressive to see from such a tall fighter) and dropped him. Consuegra made it to his feet to survive the round, but the writing was on the wall. In the third Consuegra was quickly dropped again and once more beat the count, but there would be no escape. Breazeale taunted his opponent, seemingly enjoying the slugfest he was now dominating, and pounced. The rugged Cuban was put down again by a chopping overhand right and even though he bravely made it to his feet again, the ref felt compelled to end the onslaught. Breazeale improves to 15-0 (14KO) while Consuegra suffers his first loss as a pro, dropping to 17-1 (14KO).

In the main event, Guerrero looked to get back into the win column after his loss to Keith Thurman in March. The action started quickly in this bout, as Martinez brought the fight from the opening bell. As usual, Guerrero made this fight much tougher for himself than it should have been, slugging it out with his opponent instead of boxing. At the end of the fourth round, Martinez caught his opponent on the ropes and connected with a multi-punch combo, badly hurting and dropping Guerrero. But the Gilroy, California native was in tremendous shape and not only made it out of the round, but came back in the fifth round determined to get his opponent’s respect. And he did, pushing Martinez back and clearing out the cobwebs in the process. There was a lot of back and forth action through the middle rounds, as both men exchanged in close quarters throughout. And into the later rounds it was Guerrero whose face was marked up, with large welts under both of his eyes. However Martinez looked more tired, his mouth open through much of the second half of the fight, and his punches seemed to lack steam.

This fight was very close, particularly because of the knock down in the fourth, and it went to the cards. The judges scored it 95-94 Martinez and 95-94 Guerrero, with a third score of 97-92 for the Ghost, giving him the split decision win. The crowd erupted in boos when the last score was announced, as there was no way either man had won more than 6 of the 10 rounds in this bout. The punch stats were very close, as Guerrero landed 120 of 571 total punches (101-370 power shots), while Martinez landed 114-451 (113-394). Guerrero, who earned a million dollar purse for his efforts, improves to 33-3-1 (18KO) while Martinez, who was paid $80,000 for his work, fell to 19-4-1 (4KO). No doubt Al Haymon will have Guerrero in another high profile PBC broadcast later this year; he always delivers action.

In the third and final bout of the NBC broadcast, Argentinian fighter Jesus Cuellar went up against the much older Vic Darchinyan in a 12 round featherweight title bout. Not only was there a massive age difference in this match (39 years old to 28), but the size difference was apparent. Darchinyan started his career as a flyweight back in 2000, and although he was able to touch Cuellar often in the early rounds, his punches seemed to have no effect. Even though the Armenian was landing the more consistent heavy blows, Cuellar’s face barely had a mark on it. None the less, Darchinyan was scoring and halfway through the fight most of the ringside media had him ahead on their cards. It appeared as though the old veteran was going to give a boxing lesson to the young lion. But everything changed with one punch in the eighth as Cuellar landed a hard left hand on the chin as the Darchinyan pulled straight back with his hands down, dropping him hard. The worn down fighter made it to his feet, but was in bad shape. Everybody in the arena knew the fight was over at this point, but the referee allowed it to continue. Even though Darchinyan’s corner – and the ring doctor – pleaded with the ref to stop the bout he couldn’t hear them. His corner seriously failed him, as they should have thrown the towel in to get the ref’s attention. Cuellar immediately pounced on Darchinyan again, landing several concussive blows that crumbled him along the ropes, completely defenseless. He took more punishment than he should have. Finally the ref stopped it to give Cuellar the TKO victory at 1:04 of the eighth round. The Argentinian improved to 27-1 (21KO) and Darchinyan, who should seriously consider retirement as he has lost 5 of his last 8, fell to 40-8-1 (29KO). 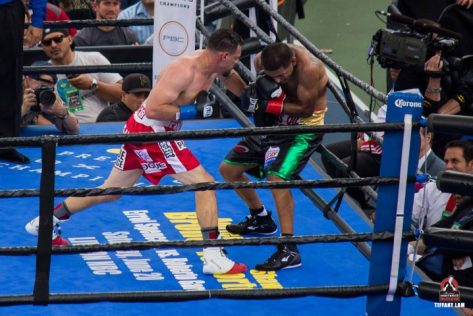 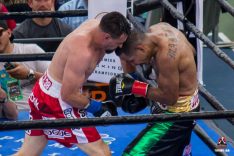 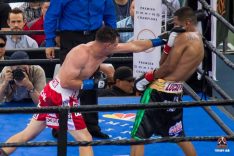 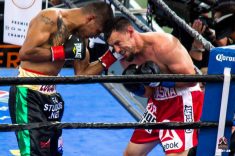 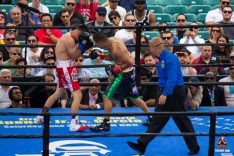 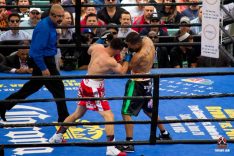 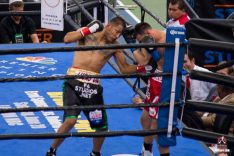 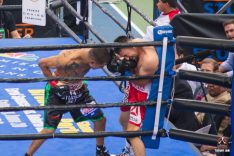 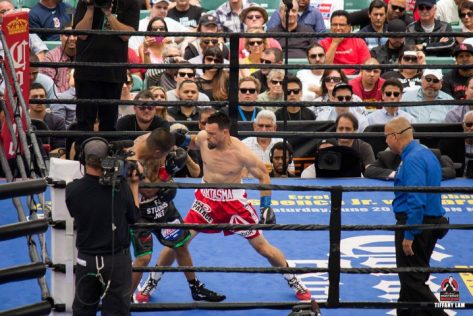 Questions, comments, hate mail? You know what to do.
Twitter/Instagram/Facebook: @MonteroOnBoxing

« Roach: Khan will never get Mayweather fight off that performance against Algieri