Andre Ward: I want to put on a tremendous performance on Saturday 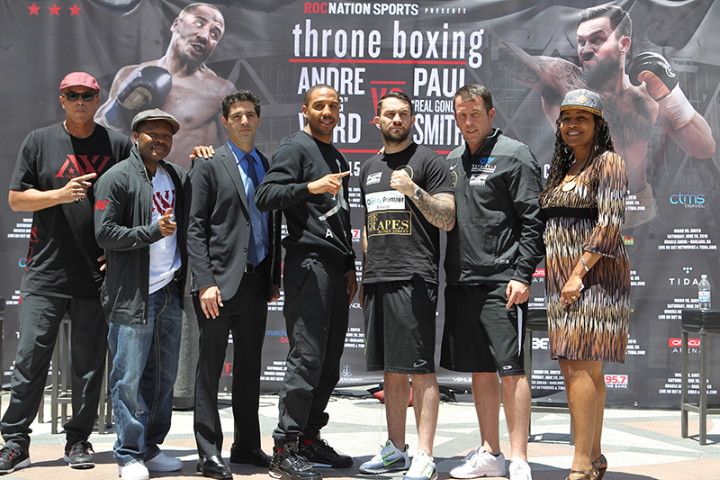 (Photo credit: Tom Hogan – Hoganphotos) By Scott Gilfoid: Well it looks like WBA super middleweight champion Andre Ward (27-o, 14 KOs) won’t be taking it easy on his overmatched opponent Paul Smith (35-5, 20 KOs) on Saturday night in their catch-weight fight at 172 pounds. Ward, 31, says he’s going to be looking to impress the fans with a tremendous performance against the 32-year-old Brit when he gets him inside the ring in front of a large crowd at the Oracle Arena in Oakland, California.

Ward has been out of action for 19 months since his last fight in 2013, and he obviously has a lot of rust that he wants to get out of his system. If Ward is planning on scoring a knockout in this fight then he should look to wait until the later rounds in order for him to get in some badly needed work.

The last thing that Ward needs to do is put Smith out of his misery in the first few rounds of the fight because Ward will need as much work as possible if he plans on fighting the top light heavyweights like Sergey Kovalev in the near future. That’s a fight that is a very real possibility for Ward in 2016, provided that he gets past Smith on Saturday and looks good in doing so.

“He’s [Smith] a competitor, he’s coming to win but you better believe it,” Ward said via Skysports.com. “Like always, I’ve prepared like I am supposed to prepare; every round I’ve sparred, every mile I’ve run.”

Before his long layoff, Ward was considered to be by far the best fighter in the 168 pound division. With the time out of the ring, it’s possible that Ward has slipped due to inactivity and the natural aging process. Just how much Ward has lost will be seen on Saturday.

I wouldn’t be surprised if Ward looks as good as always and goes out and dominates Smith in spectacular fashion. But of course you never know because some fighters lose it overnight, and in Ward’s case, he’s been out of the ring for ages. Smith is counting on that, and that’s why he plans on pushing the fight against Ward in the early going to try and wear him down and score a stoppage.

“We not only want to win but we want to put on a tremendous performance and tell the people Andre Ward is back,” Ward said.

Like a lot of people, I wish Ward had picked a better opponent for his comeback, because this is going to be too easy. Smith isn’t in the same planet as Ward in terms of talent, and it’s going to likely wind up as a sick slaughter with Ward just totally dominating Smith in winning an easy fight.

With the fight taking place in front of Ward’s hometown fans in Oakland, you can bet that Ward will put his foot on the accelerator to try and get Smith out quickly. That’s the bad thing about this fight. If it were to take place in a neutral city, I think Ward would take it easy on Smith in order to get rounds in, but he’s not going to be able to do that with the crowd cheering him on.

« Broner still looking very heavy, will he come in overweight?