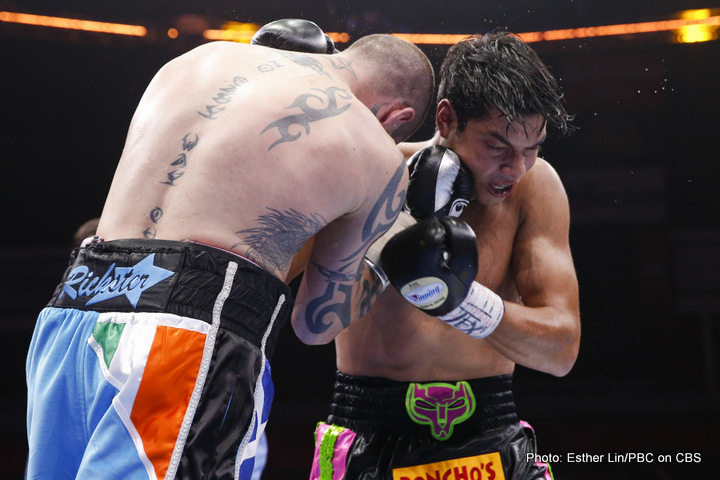 By Scott Gilfoid: Former WBC lightweight champion Omar Figueroa (25-0-1, 18 KOs) got the job done last Saturday in beating Scotland’s Ricky Burns (37-5-1, 11 KOs) by a 12 round unanimous decision, but he took a lot of punches to the back of the head all night long from the 32-year-old Burns in their fight at the State Farm Arena, in Hidalgo, Texas, USA.

Burns said after the fight that he had to hold Figueroa due to his high work rate and the heavy pressure he was putting on him the entire fight. Burns’ holding led to him losing two points in the 8th and 11th. But there was simply no reason at all to justify all the rabbit punches that Burns was throwing in the fight.

I’m a very offensive fighter, so the holding kind of slowed me down,” Figueroa said. “I tried to do what I could and, thankfully, the judges saw that. He was punching me behind the head, so I felt like I had to do the same. If you want to play like that, I can play that game.”

Figueroa did a great job of closing the distance against the taller Burns and forcing the action on the inside. Burns was clearly the better fighter when the two of them were at a distance from one another, but he couldn’t keep the action at this range.

Figueroa moved up from the lightweight division to take the fight with Burns. He was kind of getting his feet wet by fighting at 140, and he says he felt really strong. However, I think it was painfully obvious from the very start of the fight that Figueroa isn’t cut out to be a light welterweight. He took a lot of punishment against a guy who can’t crack eggs.

If Figueroa couldn’t even belt Burns around the ring like lightweight Raymundo Beltran did in their fight in 2013, then how in the world is Figueroa going to be able to hang when he gets in the ring with some powerful light welterweights like Lucas Matthysse, Terence Crawford, Danny Garcia or Ruslan Provodnikov. Figueroa needs to get a clue that he doesn’t belong at 140 and move back down to lightweight where he at least has the talent to be a top 5 contender. At light welterweight, he’s going to struggle badly.

Ann Wolfe: If I was in Kirkland’s corner it would not be the same fight »