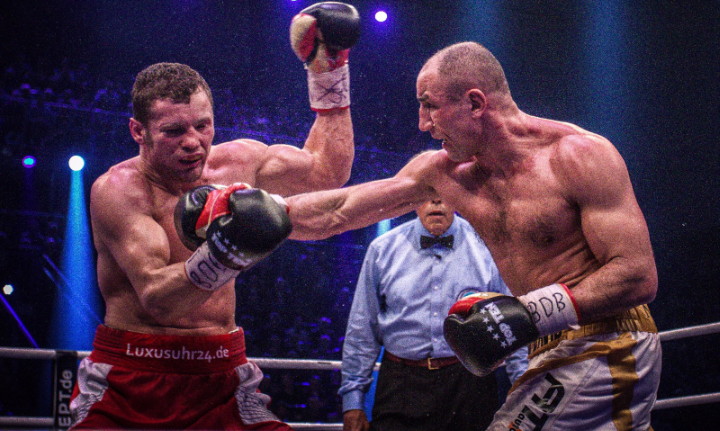 Abraham, 35, says this will be his last fight against the 33-year-old Stieglitz, but I doubt it. If the WBO keeps giving Stieglitz a high ranking, we’ll likely continue to see Abraham and Stieglitz fight in the future.

The only thing that I see stopping the repetitive rematches between Stieglitz and Abraham is if Abraham finally faces a tough challenger like Gilberto Ramirez or Vincent Feigenbutz and winds up losing.

“Robert is mandatory challenger, so of course he deserves his shot,’’ said Abraham. ‘’I’ve enjoyed our rivalry, but like all good things, this must come to an end.”

Abraham hasn’t done much since his last fight against Stieglitz in March 2014. Abraham defeated Stieglitz by a 12 round split decision in that fight. Since them, Abraham has beaten fringe contender Nikola Sjekloca and Paul Smith [twice]. In my book those were two tune-up level fights, as I don’t see Paul Smith and Sjekloca as top tier level fighters. They’ve good 2nd tier guys in my view, as neither of them have proven themselves as the top tier by beating anyone that you can call a good fighter.

The World Boxing Organization’s ranking confuses me completely. I don’t know how they rank Stieglitz over the above mentioned fighters because I don’t see Stieglitz as being a top five level fighter. To me, I have him ranked No.12. I’m not sure what the WBO’s criteria is for continually giving Stieglitz a high ranking, but I see the following super middleweights as being better fighters than him: Andre Dirrell, Anthony Dirrell, Derek Edwards, Callum Smith, George Groves, James DeGale, Julio Cesar Chavez Jr, Edwin Rodriguez, Vincent Feigenbutz, Gilberto Ramirez, Sakio Bika, Julius Jackson and Rogelio Medina.

“The Gerry Weber Stadium will provide the perfect venue for me to finish our feud,” Abraham said. “I had Robert down in the twelfth-round of our last encounter, but this time he will hit the canvas a lot sooner!’’

The fact that Abraham can’t dominate a fighter like Stieglitz kind of tells you where Abraham is at talent wise. Yeah, he’s the WBO champion, but you can make an argument that he hasn’t fought a talented fighter since he left the Super Six tournament four years ago. I mean, look at the guys that Abraham has fought in the last four years and you tell me where the talent is: Stieglitz [three times], Pablo Oscar Natalio Farias, Piotr Wilczewski, Mehdi Bouadla, Willbeforce Shihepo, Giovanni De Carolis, Nikola Sjekloca and Paul Smith. Abraham may be the WBO champion, but he’s arguably fought nothing but bottom 15 fringe level fighters for the last four years since his poor showing in the Super Six tournament. I personally don’t rate Farias, Wilczewski, Boudla, Shihepo, De Carolis, Sjekloca, Stieglitz and Smith as being good fighters. Sadly, those are the only guys that Abraham has fought since he left the Super Six tournament. The thing of it is he’s the WBO 168 pound champion.

Like I said, if the WBO is going to keep giving Stieglitz a high rankings with their organization, then I see the Abraham-Stieglitz rematches stretching for out into the future until Abraham eventually fights someone with some talent like Feigenbutz and gets beaten.

« Canelo-Golovkin: The fight HBO wants you to see…. just not right away