Mayweather vs. Pacquiao: Shut Up and Watch The Show! 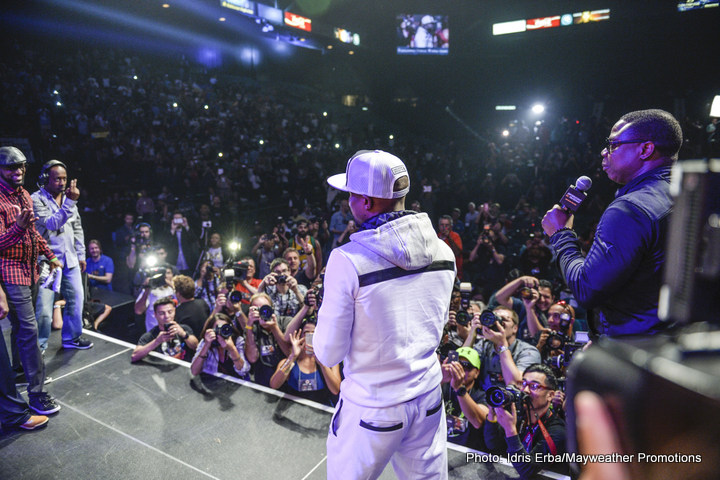 By Rusty Nate: It’s now just 3 days until the biggest fight of our generation, depending on your age and if you were alive and well watching that memorable night in Kinshasa, Zaire in 1974. We have the master boxer and defensive all-time great Floyd Mayweather Jr. (47-0, 26 KOs) taking on the record holding 8 weight world champion pressure fighter Manny Pacquiao (57-5-2, 38 KOs) this Saturday night at the MGM Grand in Las Vegas, Nevada.

I have not been this excited for a fight since Lennox Lewis vs. Mike Tyson. On that night we watched a master boxing lesson from Lennox before he stopped Mike in the 8th Round. The build up to that fight was immense, the media the fans and everyone around the world wanted to be involved in every aspect.

I would find myself surfing the internet constantly because I craved every bit of information, every video of every workout or public appearance by the fighters, I even craved every wild story or article regardless of how farfetched and unsubstantiated! That night after all the hype and the opinions put forth and all the arguments between rival fans and critics had finished, we saw exactly what everyone deep down knew would probably happen. Lennox Lewis was too big, too strong and too skillful at that point in their careers for Tyson to have had any chance of winning the fight. (For the record if the fight had happened when it should have, all those years before, I am thinking it would have been very different).

My questions are this:

Are we all ignoring that gut feeling that we have in the build up to every fight regarding who will win?

If on Saturday we see Mayweather win a wide decision, hardly take a punch and make Manny look like he is wildly missing punches all night, will we be shocked and surprised?

If Manny wins by dramatic KO or by clear margins on the score cards will we all be saying, “Wow I didn’t see that coming”?

My point, which I think you will have got already, is pretty simple. We have no idea what will happen on Saturday night but we should at least respect the fact that Mayweather is a substantial favorite to win this fight just as well as he has won the rest.

Personally, I hope it doesn’t go to Mayweather as per normal by masterclass boxing because I want the fight to be exciting and live up to the hype with maybe a knock down or two on both sides, some heated exchanges or at least a few moments in the fight that make the crowd gasp with excitement and surprise.

Simply put – Who cares right now who wins! Let’s all just shut up and watch the show.

Roach: I’m wondering if Mayweather will turn up on fight night against Pacauiao »