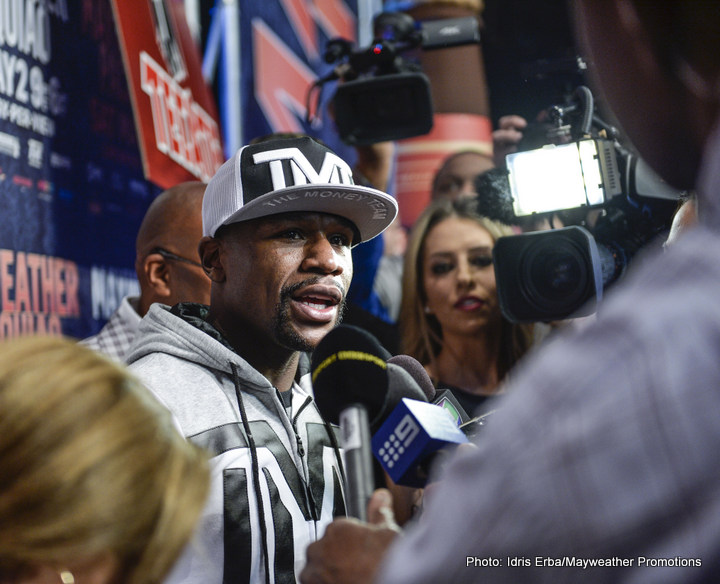 By Yannis Mihanos: The biggest fight for a whole generation in boxing, Floyd Mayweather Jr. vs. Manny Pacquiao is getting closer with just three days to go before Saturday’s fight at the MGM Grand in Las Vegas, Nevada. The excitement has hit the red button. Mayweather (47-0, 26 KOs) through the years has succeeded in constructing a marketable image that was a product of a meticulous business and marketing plan.

Like I’ve said in past articles, Mayweather leaves nothing to chance. Being at the sport as a businessman has always been and will always be his first choice.

We know that both of these fighters contain enough boxing weaponry to wipe out almost any other fighter from the welterweight division and beyond.
We know more or less the facts.

We all know Mayweather as a perfectionist, as someone who leaves nothing to chance, especially when it comes about selecting opponents.
His lack of confidence in fighting Pacquiao I believe was based on real hard evidence.

Evidence that Mayweather as a master tactician and strategist had clearly identified. Mayweather had watched Pacquiao fighting and understood that he resembles his biggest threat.

A threat to his marketing and boxing domination plans.

And so far that decision worked out fine, Floyd remained easily unbeaten: 47-0.

It worked out fine until now and especially until May the 2nd, because on that date Manny Pacquiao (57-5-2) will be waiting at the other side of the ring and the lies will be over.

You see, Mayweather succeeded in promoting and exposing himself as someone that by far he is not. He is someone else.

But that someone else might not have been so interested in riches and titles (TGE, TBE, TMT and etc.) and so he put that guy, that real character to rest.

Instead he formed a personality. One personality that sells. Through this personality he could cover all his weakness up to a level.

We live at times where exterior image is perceived as more important than true character. There is what I call : Cult of Personality.

Unfortunately a part of the world today (mostly the Western) believes and promotes that in order for someone to become very successful in boxing or in other fields, he must develop a personality that looks outgoing, flashy and shining, whether he has it or not.

Mayweather is the embodiment of all that and for me is an example to avoid , because behind all this profit and recognition something important is missing, something that once you miss it you are no longer the same even if you have all the riches in the world, even if you can call yourself great…

Floyd Mayweather had the ambition and discipline to do that day in and day out.

But not all that shines is gold as they say.

Here in boxing, people would do anything to steer some attention both in and out of the ring. They will become funny actors and cherry pickers.

But on Saturday night there will be more than just a fight. Make no mistake people: This is a fight of true Character vs cult of Personality.

Mayweather vs. Pacquiao: Shut Up and Watch The Show! »