Groves to attend Dirrell vs. Jack fight this Friday in Chicago, Illinois 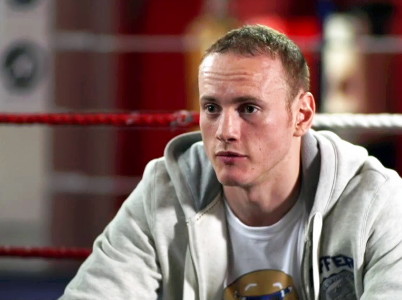 Groves, 27, will be facing the winner of this fight, and he believes he could be getting that fight by this summer in July if everything goes right.

Groves is ranked #1 by the World Boxing Council (WBC), and is the WBC mandatory for Dirrell’s title. You can make a very strong argument that the WBC made it incredibly easy for Groves to lock himself into the mandatory spot by them putting him in with little known contender Christopher Rebrasse in a WBC 168 pound title eliminator last September after Groves had been knocked out twice in a row by IBF/WBA super middleweight champion Carl Froch.

It’s obviously pretty rare that a fighter with two straight knockouts is put in an eliminator by a sanctioning body. In my mind, it’s the equivalent of an NFL team being allowed to go to a Championship game after a losing season after beating mediocre team. Groves is now on the verge of being the Super Bowl against Dirrell despite the fact that he was blasted out twice by Froch and only beat some obscure guy named Rebrasse.

“It’s always good to go and see it live because you might see things you would otherwise miss. It will be a good opportunity to scope the opposition,” Groves said via Sky Sports News HQ.“If he (Dirrell) wins he’s got 10 days for us to secure a deal or the fight will go to purse bids and then it will take place in 90 days. So in July I will be challenging for the WBC, whether it’s Dirrell or Badou Jack.”

Groves thinks he’ll be getting a title shot quickly, but I wouldn’t be surprised if he is made to wait a lot longer than July. If there’s an injury that occurs to the winner of the Dirrell-Jack fight, which is a real possibility, then Groves will likely have to wait. Further, the winner of the Dirrell vs. Jack fight could ask the WBC for permission to have the title defense against Groves pushed back to later in the year in order for them to have more time to heal after their fight. July is only three months away, and that could be too soon for the winner of the Dirrell-Jack fight to get back into the ring after what might be a very, very tough fight on Friday.

“I have a great opportunity in front of me and I have got plenty of time to prepare for it,” Groves said.

I think Groves is out of his league here against Dirrell, and even against Jack. Groves was stopped twice by Froch, and he hasn’t looked good since then in his fights against Rebrasse and Denis Douglin. Both guys slightly staggered Groves, and neither of them are in the same league as Dirrell.

Groves is a young fighter, and he has a chance of hanging around long enough to one day capture one of the titles and hang onto it for a little while. But I definitely think that Dirrell is the wrong guy for him to be achieving his goal of becoming a world champion. Groves needs to target an old lion like WBO 168lb champion Arthur Abraham instead of a young talent like Dirrell, because I see this going really badly for Groves when he gets inside the ring with the American fighter. Dirrell hits too hard, is too fast, too accurate and much too talented for a guy like Groves.

« Mercito Gesta: After Carlos Molina fight, I hope to get a world title shot